Eli Lilly (LLY) had sold off and sold off hard. Down more than 24% from the summer highs through the late October low. The firm reported earnings twice within that time frame. The most recent quarter of the two, the third, was posted on October 27th. Undeniably, the numbers disappointed. EPS missed, and it was not close. Revenue growth? Yes, but pedestrian in nature after several quarters that had appeared to be much more robust, and also a miss of consensus view. The 27th was also the day that the firm had ended Phase 3 clinical trials for LY-Cov555,an investigational monoclonal antibody therapeutic meant to be used in conjunction with Gilead's (GILD) Remdesivir as a potential treatment for hospitalized patients diagnosed with Covid-19. Why? The NIH's National Institute of Allergy and Infectious Diseases (NIAID) apparently at the time saw only a low likelihood that this cocktail could demonstrate benefit. So... lousy earnings, coupled with a lousy headline. The stock would soon bottom.

However, Phase 2 trials for ambulatory patients with mild to moderate symptoms continued. The very next day, a deal was announced where the U.S. government would purchase 300K vials of this drug if the FDA eventually granted it Emergency Use Authorization status. That deal for $375 million, also came with an option for another 650K vials that would run the government another $437.5 million. Hence, a story with something left to tell.

By November 9th, the firm had received an EMU authorization for LY-CoV555 for use in high risk populations. Then, after routine FDA inspections, four observations were made at the firm's Branchburg, New Jersey facility that required remediation. The firm apparently demonstrated that appropriate steps had been taken, and that quality had never been impacted. Markets reacted very well.

This week, Samsung Biologics announced the mass production of "a" Covid-19 antibody treatment developed by Eli Lilly. This med can be used for non-hospitalized folks over the age of 65 and for anyone over the age of 12 with underlying health conditions that put them at increased risk. The goal is to manufacture 1M doses by year's end. There's more.

On Thursday of this week (November 19th), the FDA granted the firm another EMU. This one for the use of Baricitinib, an already FDA approved oral medication meant to treat rheumatoid arthritis, in a cocktail with the already mentioned Remdesivir to knock an additional day off of average Covid-19 related hospital stays. Domestic studies had shown Remdesivir to reduce recovery time modestly, by a couple of days, and in conjunction with this arthritis drug that recovery time is further shortened.

This morning, the WHO (World Health Organization) in a piece published at the British Journal of Medicine casts doubt on the effectiveness of Remdesivir in the first place. What do we believe? How do we know? We do not. We do know that every domestic and international organization involved has made enough mistakes since this whole pandemic started that I think we have to doubt everyone. Still, personally, I will trust the FDA over the WHO every day of every week of every month. Just sayin'.

Eli Lilly does not report their fourth quarter for some time. January 20th to be exact. Something about that date rings a bell. Just can't pace my finger (just kidding) on it. Expectations of about a dozen sell side analysts are for EPS of $2.03 on revenue of $6.6 billion. That would be earnings growth of more than 17%, on sales growth of more than 8%, which more or less gets the firm back on track. 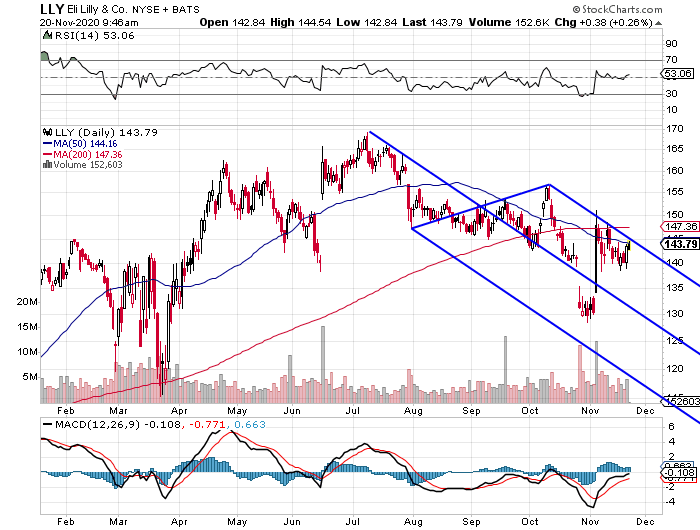 This stock broke down from what had been a lengthy upward trend, though perforated in March by the realities of the pandemic. A downward sloping Pitchfork has been in place since early July, and the stock has shown an inability  since mid-October to break out past the upper trend line of the model, or more recently... the 50 day SMA, currently $144.

Understand this, investment here is somewhat speculative, which sounds off when speaking about an old school pharmaceutical that pays shareholders 2.1% just to hang around. What I mean is that there is a lot of traffic to the immediate front. That upper trend line, the 50 day SMA, and the 200 day SMA are just $3 higher than that. This stock tackles those three lines in the sand and fund managers, currently holding 38% of the company in aggregate, will have to take that number, which is industry norm up to a more Bristol-Myers Squibb (BMY)  -ish 41% or so. In other words, I see $175 as possible, probably early next year. I am flat the name for now. Let's see how the shares behave around these technicals. Then we'll make an equity decision.

In the meantime, traders could still get paid more than $3 for LLY January $135 puts. That's an idea.

(Bristol-Myers is a holding in Jim Cramer's Action Alerts PLUS member club. Want to be alerted before Jim Cramer buys or sells BMY? Learn more now.)

Get an email alert each time I write an article for Real Money. Click the "+Follow" next to my byline to this article.
TAGS: Drug Approvals | Earnings | Investing | Markets | Options | Stocks | Technical Analysis | Trading | Pharmaceuticals | Coronavirus