Friday's tremendous equity market rally put a bow on what was a wildly volatile five day period last week. The Friday rally bookended quite well with the sharply bullish reversal off of extreme lows experienced on Monday to put most large-cap indexes in a better place by week's end, despite three red daily candles jammed in between the two sessions.

The wild week that was, contained high-profile and exceedingly positive quarterly earnings results posted by the two largest public U.S. companies, tech giants Microsoft (MSFT) and Apple (AAPL) . Both firms acknowledged supply chain issues that they were somehow (due to their heft?) better able to manage than other firms have been able to. The week also brought forth a trajectory changing FOMC policy meeting where the statement itself was more cautious than the press conference sounded. Along with that statement, the Fed published additional information outlining their plans for the coming balance sheet reduction (quantitative tightening).

To cap it all off, the U.S. Bureau of Economic Analysis reported the agency's first estimate (of three) for U.S. GDP (economic growth). The headline print of 6.9% growth (quarter over quarter, seasonally adjusted, and annualized) appeared much stronger than expected. Once looked into however, economists could see that the bulk of economic activity was in inventory building, thus leaving the state of U.S. growth in a far more fragile condition than most market participants had realized. With Retail Sales a late 2021 weakness, one has to wonder just how severe an impact excess inventories will have on the short to medium term future of U.S. economic activity, and if supply at some time in the second quarter (or sooner) overwhelms demand, rendering inflation and the economy itself in a state of weakness just as the central bank digs into policy normalization.

Far more time consuming and perhaps just as dangerous has been the U.S. economy's travels since the end of the "Great Financial Crisis" that meandered through several attempts to either normalize short-term rates or better manage the balance sheet. While headline level consumer level inflation rages along at 7% if you are a consumer, or 5.8% if you are a central banker, and GDP streams on at 6.9% (2.0% ex-inventories), futures markets trading in Chicago are now pricing in a 100% probability that the FOMC increased their target for the Fed Funds Rate on March 16th, and a 15% chance that the Fed kicks off this round of rate hikes with a 50 basis point move.

These markets are now also pricing in a Fed Funds rate between 75 bps and a full 1% (current target: 0% to 0.25%) by June 15th. In fact, if one trusts these futures markets, there is now a 66% probability that the Fed Funds rate stands between 1.25% and 1.5% by year's end. There is even a market for overnight rates as high as the 2% to 2.25% range. Has anyone stopped to think about my supply overhang scenario? Has anyone bothered to think that maybe consumer demand ebbs magically with the withering of excess fiscal accommodation as monetary policy withdraws liquidity? Am I the oddball? Does no one else see what I see?

We now know, thanks to the St. Louis Fed, that the velocity of money at a ratio of M2 money supply ticked up ever so slightly in the fourth quarter from the third. We know that velocity ran sideways as a ratio of M1. You know what the last quarter was where M1 velocity increased versus the quarter prior? Q2 2019. No joke. Does anyone else see an inability for an elevated pace of consumer level inflation, not to mention, economic growth to sustain itself even with no change in policy direction without a correlative move in velocity? Does this not make for common sense?

Don't get me wrong. I am very much in favor of removing overtly accommodative monetary (and fiscal) policy. Capital over time should never be free, and the Fed's balance sheet does need to be drained. That said, national currencies should be backed by something more than the faith of all the good children who line up to play along. That makes sense too, doesn't it? Sorry, my Austrian style economist is showing.

I do not ask for the unimaginable. What I do ask is for a pragmatic, nuanced approach requiring more use of a scalpel than a sledgehammer. Finesse. Perhaps, the back-door approach (balance sheet) is where the aggression needs to be while movement at the front door remains slow to sloth-like. The central bank can obviously use the balance sheet to impact the yield curve where and when necessary to impose on markets a healthy enough looking yield curve until such a point as the economy is healthy enough to carry on, without such help.

A thing of beauty for sure. The S&P 500 traded 1.65% higher, finishing a tough week up 0.77%. The Nasdaq Composite ran 3.13% for the day, closing the week on the green side of "unchanged." Despite strong gains made on Friday, the Dow Transports and all of your favorite small to mid-cap indices closed down for the week. The Russell 2000 not only gave up 0.98% over the past five trading sessions, but is now 12.33% lower for the year/month.

The S&P 500 went into the weekend trading at 19.7 times (12 month) forward looking earnings, after starting the week at 20.1 times, and bottoming on Thursday night at 19.2 times. That's volatile. Just an FYI, the five year average forward looking PE ratio for the S&P 500 is 18.5 times. The index just is not that insanely overvalued at this point. The 10 year average is considerably lower (16.7), but the five year average does include 2018's failed attempt to normalize monetary policy as well as overtly easy pandemic-era conditions that got us where we went in the first place.

Breadth was strong enough on Friday. Ten of 11 sector-select SPDR ETFs closed higher, led by Technology (XLK) , while only Energy (XLE) closed in the red. By the way, Energy led for the week. Winners beat losers at the NYSE by more than two to one, and at the Nasdaq by almost two to one. Advancing volume took 71% of NYSE composite trading volume and 80.3% of Nasdaq composite (not Composite) trading volume. Therein lies the catch.

Readers will remember that even though Monday's lows had held for the week, that we needed to see at least one of the two major large-cap indexes trade aggressively higher on elevated trading volume for confirmation of a change in market trend. Oh, you got your higher S&P 500 and you got your higher Nasdaq Composite. Unfortunately, trading volume dried up on Friday. Volume declined on Friday from Thursday for NYSE listed names, for Nasdaq-listed stocks, in aggregate for S&P 500 constituent names and in aggregate for Nasdaq Composite listed names. No matter how I slice it and dice it, Friday was the lightest trading day of the past week. Portfolio managers were not "all-in" on Friday's rally, not that the rally is doomed to failure, but nothing has been confirmed.

Atlanta Fed Pres. Raphael Bostic interviewed with the Financial Times on Friday. Most of the financial media has focused over the weekend on his quote, "Every option is on the table for every meeting. If the data say that things have evolved in a way that a 50 basis point move is required or be appropriate, then I'm going to lean into that... If moving in successive meetings makes sense, I'll be comfortable with that."

What much of the media is missing this weekend is that Bostic was being open to rethinking his stance if necessary. Bostic very much stuck to his call for three three-quarter point interest rate hikes in 2022, starting off in March. In fact, Bostic also said, "Our policy path is not a constrictive path. It's a less accommodative path. If we do the three (hikes) that I have in mind, that'll still leave our policy in a very accommodative place." Funny how folks only read the headline, or part of the story. Bostic basically told you his position, which is still on the dovish side relatively speaking, but said he would be open-minded. Gee whiz.

Of course you know that this is a big earnings week. This is also another "Jobs Week" that will culminate on Friday with the increasingly inconsistent, and highly contrary BLS (establishment & household) surveys for job creation. These surveys, in recent months, have rarely even come close to sending the same message in regards to the economy's ability to create jobs. That said, market watchers will react to the Non-Farm Payrolls number more than the household number, or the ADP print for private sector job growth (on Wednesday) that I think has probably become the more reliable of the three.

On the earnings front, you'll hear from mega-caps Alphabet (GOOGL) , Amazon (AMZN) and Meta Platforms (FB) , as well as a host of other market-moving large-caps.

OPEC-Plus will also meet this Tuesday, as the threat of conflict on the Russo-Ukrainian border has put a rising bid under Crude/Energy prices. Expectations are that the cartel and allied producers will stick to plans to raise output by 400K barrels per day in monthly increments. It is felt across the industry that at least some OPEC producers are up against issues regarding capacity. Does this open the door for U.S. producers to capitalize and restore U.S. energy independence while prices are elevated? One would think. 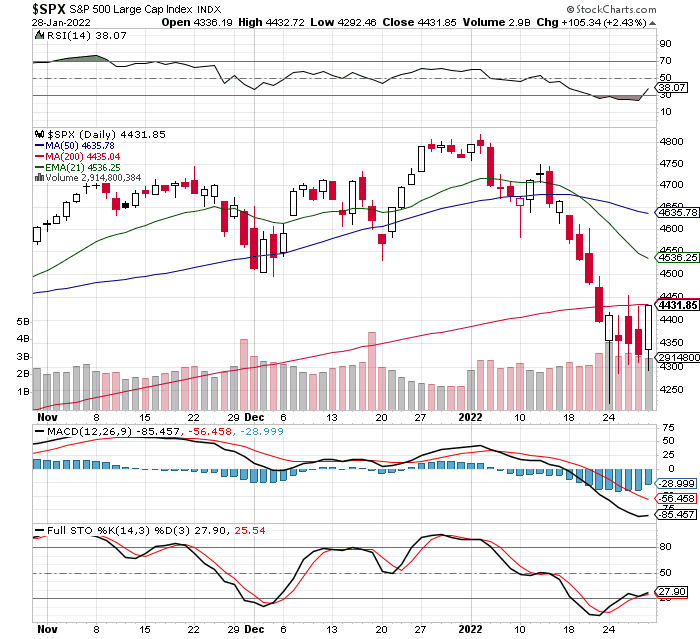 The S&P 500 has closed below the 200 day SMA for six consecutive sessions, and hit stiff resistance right there on Friday. Both Relative Strength and the Full Stochastics Oscillator climbed on Friday out of technically oversold territory, while the daily MACD remains in a dark and dirty place.

The index is going to need a positive push at some point later today (Monday) in order to keep the pressure on. Resistance at this line is probably the main missing ingredient that kept portfolio managers from increasing exposure to risk on Friday anymore than they did. You see an upward break of this line, you'll see trading volumes expand. This is what managers, uhm, I mean their algorithms are watching.

(MSFT, AAPL, GOOGL, and AMZN are holdings in the Action Alerts PLUS member club. Want to be alerted before AAP buys or sells these stocks? Learn more now.)

Get an email alert each time I write an article for Real Money. Click the "+Follow" next to my byline to this article.
TAGS: Earnings | Economic Data | Federal Reserve | Interest Rates | Investing | Markets | Stocks | Technical Analysis | Trading | Energy