Anyone taking Monday off from the markets, and tuning into a mainstream evening newscast would have heard headline numbers thrown at them that would lead the uninformed to believe that a dull, rather quiet day had transpired. After all, the S&P 500 closed about as close to unchanged (-0.01%) as I think I have seen since the dawn of the electronic age. The Dow Jones Industrial Average and the Nasdaq Composite were both nearly as stable. Yet, trading volume popped at the Nasdaq Market Site, as well as the New York Stock Exchange, as a very choppy market developed just below the calm surface.

Cast out were Tech shares, software in particular, as well as much of the healthcare space. Cast out were the bond proxies, or dividend providers as Treasury markets experienced a broad selloff that permitted the slope of the yield curve to correct just a bit, taking the banks along for a positive ride. After the banks came energy, as value was sought in favor of growth. A great rotation? Not great yet, but there is without doubt ... a disturbance in the force. That disturbance favors value over growth. Remember the gold/copper ETF ratio chart that I showed you last week? Here is a similar chart, using ratios involving the SPDR S&P 500 Growth ETF (SPYG) sporting a last sale of $39.72 and the SPDR S&P 500 Value ETF (SPYV) that comes with a last sale of $31.92. 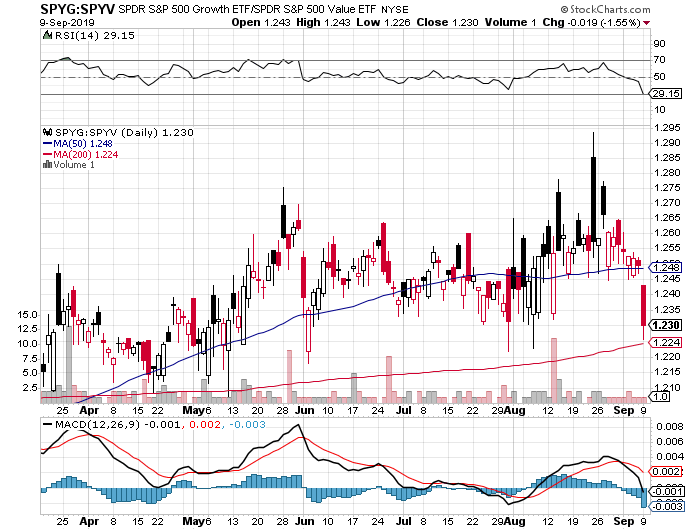 Monday's action is severe, as the ratio broke through the 50 day SMA, and threatened the 200 day SMA at the lows. The trend that became so apparent on Monday, however has now been in place since late August. That means that Fed Chair Jerome Powell's somewhat non-committal speech on Friday may have broken the dam, but less dovish posturing withing the ECB is actually what is starting to capture market attention. Without a soft ECB... without a soft BOJ, there is far less pressure on the FOMC to be aggressive itself.

So readers know what they are looking at, the five largest holding for the SPYG ETF are Microsoft (MSFT) , Amazon (AMZN) , Facebook (FB) , and both classes of Alphabet (GOOGL) , (GOOG) ... so diverse. The five largest holding on the SPYV blotter are Apple (AAPL) , JPMorgan Chase  (JPM) , Bank of America (BAC) , AT&T (T) , and Chevron (CVX) . Just a few story stocks in there.

There is a growing perception among traders that perhaps the ECB may be a bit less aggressive in easing monetary policy this Thursday than previously messaged by the central bank's own leadership. Oh, don't get me wrong... the European economy is still in flames. Anyone who saw this morning's (Tuesday's) French (a mere miss), and Italian (something like a garbage truck rolling over a cliff) July data for Industrial Production knows that. There are voices within the ECB establishment that (probably correctly) doubt the likely effectiveness of excessively easy policy. The most notable of these "hawks" would be Bundesbank leader Jens Weidmann, but he has a key ally in Dutch central banker Klass Knot. This week will surely get even more interesting. The truth as I see it is that kick-starting Europe's quantitative easing program would likely help, at least in regards to Eurozone inflation for the short to medium term, but reducing overnight interest rates further into negative territory would in my opinion do nothing to provoke the velocity of money, while only putting more pressure on Europe's beleaguered banking system... unless there is at least more creativity in how this is done. (Tiered system?) Not saying that the ECB can't be stimulative. Just saying that hitting a piece of wood with a hammer has been tried. This leaves one's arms sore, as well as a regional economy that remains jammed up.

New readers likely think me a dove. I prefer to think of myself as a Von Mises kind of guy now that I have given up on playing center field at the major league level. The truth is that I am an environmentalist, meaning that I adapt to the field presented. Should the Treasury yield curve give the U.S. economy what it needs on it's own, and should U.S. dollar exchange rates back off, then I am fine with a less aggressive stance at the FOMC. Should competitors act in a way that puts the U.S. economy at a disadvantage, then by all means the FOMC must act with a level of anger that intimidates. They go slow? Then we can go slow, but we still have to go. They get wild? We'll show them wild. One must compete.

The Federal Reserve delivered blowout numbers for July Consumer Credit on Monday night. What is clear would be that U.S. consumers themselves were aggressive in July. Consumer level borrowing soared by the most ($23.3 billion) in one month since January, largely on the back of a $10 billion increase in revolving credit or credit card usage.

Keep in mind that we already knew that consumers themselves were aggressive in July, supported in no small way by special events requiring the use of this revolving credit such as Amazon's Prime Day, and the similar sales efforts by competitors like Walmart (WMT) , and Target (TGT) in an effort not to be left behind. The Census Bureau puts August Retail Sales to the tape this Friday morning and much less is expected from those numbers. Stay tuned.

Perhaps overshadowed by the ECB's policy meeting this Thursday is the recent rise for crude prices going into this Thursday's other meeting... the OPEC-JMMC (OPEC and collaborating non-OPEC producers) get together in Abu Dabhi. Compliance with production restraints has been strong. Will the group take further action? The energy sector has been a beneficiary of this early September rotation. Within the sector that has been badly beaten, oil services have taken the worst of it. While the Energy Select Sector SPDR ETF scored a 2% run on Monday, Oil Services as an industry ran amok.

We'll know in a few day just how meaningful this is, but Schlumberger (SLB) just took back that stock's 50 day SMA.... 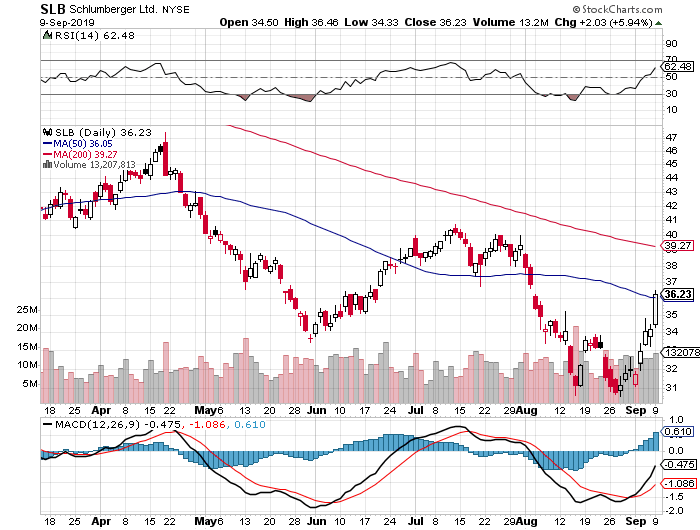 Last week on The Claman Countdown, I mentioned dividend payers such as British Petroleum (BP) , Royal Dutch Shell (RDS.A) , and Chevron (CVX) as places to go in this market, as these names all return some nice capital to shareholders and I thought represent good value at these levels. I am also long this one, and this one also pays a $2 annual dividend, good enough for a 5.5% yield. In my opinion, energy remains the best place where investors expose themselves to the revenue provided by more defensive sectors, while also exposing oneself to positive developments concerning international trade and/or economic growth.

Apple Of My Eye

Today is the day!! All the cool kids will either be in Cupertino, or at least be paying attention. Apple's  launch event is slated for 1 pm on the East Coast, and on the docket will be three new iPhones, and a new Apple Watch. Expectations for the new smartphones are not exceedingly high as this is not the advent of 5G technology for the Apple ecosystem. The firm as all must know by now has been in a shift toward the more highly valued services/recurring revenue model and away from a reliance upon the sales of expensive gadgets. With that in mind, it is likely that the Apple Watch and it's use as a gateway into healthcare and personal well-being could put this product on a pedestal. In addition, with so much hype over competition among streamers of entertainment, and with the Walt Disney Co. (DIS) taking such a high profile approach, Apple is nearly forced to detail plans and pricing for Apple TV Plus this afternoon.

Why does all this matter so much? As detailed here about a week ago... AAPL shares remain riveted to pivot. In fact, the spot was pierce but not held just yesterday. 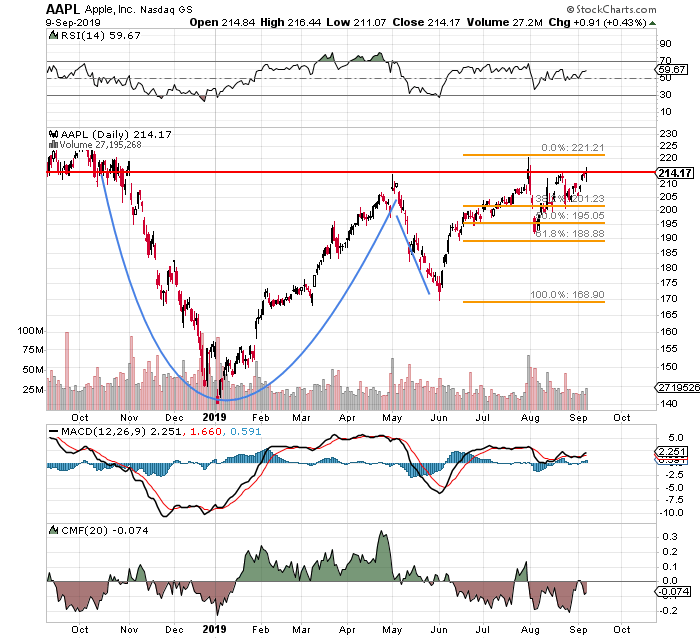 Another successful effort later today could allow the shares to make another run at the $221 post-earnings high of late July. A poor reception allows for prices very close to the $201 Fib level. The fact is that these are trading levels. Investors have to focus more on trade talks than on short-term events. This allows me, as a shareholder, to be generally positive on this name for the rest of September at a minimum. Then I take another look.