Honestly, very little. You already know that. At least personally. Now, that does not mean that I never become concerned. In fact I am concerned about our markets right stinkin' now.

Equity markets have come a long way since bottoming the day after Christmas. That morning, the nadir of equity valuation ran into a violent and algorithmic reaction to some soothing Fed speak. The central bank made an effort to calm the street in the wake of the December 19th Jerome Powell press conference. There was a spate of immediate profit taking on January 3rd, and that was pretty much the last we've seen of any serious attempt by the bears to re-take control. Trading volume, by the way had spiked on the 3rd, and has mostly tailed off since then. Important? Let you know.

Good times? Earnings season is upon us. Some of the early results are pretty decent. Then again, while there has been to this point in time a drumbeat of EPS beats, the revenue side has been sloppier. For this rally to be sustained, it is revenues that must perform. This season is indeed the final season where lower tax rates will allow for easy comparisons. Soon the truth will be told, and some firms may find themselves in the position where those easy policies, both fiscal and monetary, have driven them as far as they can go without actually taking market share away from competition. For the investor, this means that more so than we have seen in an eon, there will be winners, and yes dear children... there will be losers that don't bounce.

I was asked last week where I saw a roadblock to a continuance of recent equity markets success. My answer at the time was that I saw the area around 2630/2644 for the S&P 500 as a dangerous spot. 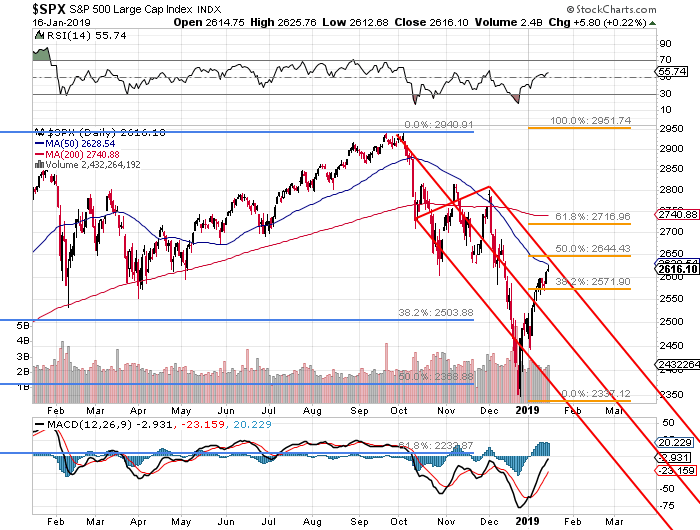 As readers can see, the 50 day SMA for the index now stands at 2628. A 50% retracement of the 4th quarter puke fest would be roughly 2644. My models are crudely drawn, I get that, but then again we are using hand grenades not sniper rifles. Note that the index topped out at 2625 on Wednesday, and right here, price not only meets that 50 day, but also to the top trend line of the downward sloping Pitchfork. If we stumble, it will be in this immediate area. I suggest a more defensive posture until we find out if this Pitchfork is still valid.

On Tuesday, Goldman Sachs (GS) smoked estimates for quarterly profit, and CEO David Solomon seemed to improve the firm's image at an important time just by showing up. Bank of America (BAC) earnings were just spectacular. Who needs a steeper yield curve? Apparently not these guys. They don't need to trade either. They just need you, the consumer. They'll figure it out from there.

Yes, these banks were credited with Wednesday's rally... but there was something else supporting equity markets, and not just here. The People's Bank of China moved to inject the equivalent of $84 billion into that country's banking system on Wednesday in response to a plethora of softer data that included a slower environment for credit. In other words, the velocity of money in China had tapped the brakes ahead of the Lunar New Year. It is not lost on Chinese leadership that they walk a tightrope. If the government need the banks to push cheap money out the door, they will, especially at a time of year where traditionally demand for yuan increases.

While news from China aided equity markets on Wednesday, news broke late that Huawei Technologies had come under the microscope in the U.S. federal investigation into possible theft of trade secrets and/or technologies used by U.S. firms. Thought the trade conflict between the administrations of Presidents Trump and Xi was warming. Hmm.. maybe, maybe not.

Though I Walk Through The Valley

Anyone else notice that cash levels at Charles Schwab (SCHW) were up 2% year over year? Anyone else notice that the Beige Book revealed that some firms were holding off on already planned business investment? Reducing full year 2019 forecasts? That in general, businesses had become less optimistic in the face of tighter monetary conditions that brought on market instability? Now, how much will all of us lean on surveys such as the Beige Book, with the partial shutdown of the federal government depriving us of the mountain of macro-economic data that we have become accustomed to?

Speaking of the Fed, our central bank released a work on Wednesday that illustrates the decline in home ownership among those aged 24 to 32 from 45% in 2005 to 36% in 2014. The Fed estimates that 2% of that decrease, or roughly 400,000 individuals, have been prevented from buying a home due to rising student debt. Debt in that form has reached $1.5 trillion. Talk about a drag on housing. Actually, I am surprised that folks that young without debt used to buy more homes. The comeback of the commuter school? We'll see.

Jerome Powell may feel that shutdowns historically have had only "fleeting effects", but this shutdown is starting to feel different from those that we have experienced in the past, is it not? As you certainly have heard by now, White House economists have projected a 0.13 percentage point drop in (quarter over quarter, and seasonally adjusted in annualized rate form) GDP for every week of this shutdown. That's 0.08 percentage point for work not being done by the 380K furloughed workers, and 0.05 percentage point for the work not being done by government contractors. Not included in this data is a reduction in consumer spending resultant from those 380K individuals going without pay, the other 420K who are actually working without pay, and on top of those 800K folks... the contractors and their employees who are likely underemployed at this time.

Is there a way to estimate the work slowdown now unofficially in effect among the unpaid workers still expected to show up every day? We are now two weeks out from January numbers on employment. Non-farm Payrolls have to expected to print in negative territory. How does the central bank react to that? Do they even try? Well at least it's not like the suspension of the debt ceiling becomes an issue on March 1st or anything. If the two sides can not compromise on something as inconsequential to the federal budget as is the fight over this wall, then how on earth do we even approach that?

What I Have Been Trying To Tell You

Earlier this week, Microsoft (MSFT) and Walgreens Boots Alliance (WBA) announced together a broad strategic partnership. Should the economy expand nicely, and growth stocks resume their march, cloud names will rule the day. Should the economy, and with it, the marketplace struggle in 2019, money will still have to be spent on business integration (and development) involving the cloud.

This is one of the main reasons behind my seemingly permanent long positions in Amazon (AMZN) , in Microsoft (MSFT) , in Salesforce (CRM) , and in Adobe (ADBE) . I look for quality in this space, and generally... this is the one slice of our market where I do not worry about day to day movements in pricing. When these stocks sell off, my only decision is if the shares are trading cheaply enough for me to grab a few. This is also why, when I take a leap of faith on a smaller name, it would be one that operates in the cloud where there's in my opinion, an obvious need. Hence, why I stuck by Zuora (ZUO) through the lock-up expiration and fourth quarter beat-down.

By the way, the deal between MSFT and WBA is a seven year marriage that involves access to Windows 10, and Office 365 for more than 380K Walgreens employees while the firm migrates most of it's technology infrastructure onto the Azure platform. Walgreens is not alone. Such well known entities as Walmart (WMT) , Mastercard (MA) , Royal Dutch Shell (RDS.A) , General Electric (GE) , and Kroger (KR) have all climbed on board the Microsoft train in the recent to semi-recent past. Oh, Sarge 986 is a customer too. MSFT will go to the tape in about two weeks with their fiscal second quarter. Expectations are for EPS of $1.09 on revenue of $32.5 billion. If those projections are on the money, they would represent year over year increases of 13.5% and 12.5%, respectively.

The name has hit 106 resistance, and looks interesting perhaps at 103, but in my opinion more so at 101. Although the daily MACD, Relative Strength, and Money Flow all look significantly improved from here, note that trading volume has declined steadily throughout the name's recent run. That, to me, is a negative that could allow for cheaper entry than where the name went out on Wednesday night.

Notes: Aggregate debit amounts to 17 cents. In other words, the traders is risking 17 bucks to try to return a max of $700. In order to set up this ridiculous profit potential in terms of potential, the trade must allow for possible equity exposure at the $101 level, where the chart implies possible support.

Get an email alert each time I write an article for Real Money. Click the "+Follow" next to my byline to this article.
TAGS: Earnings | Economic Data | Federal Reserve | Investing | Markets | Options | Stocks | Technical Analysis | Trading | Market Recon