Friday was a less than perfect day for U.S. financial markets. The Nasdaq Composite and Nasdaq 100 led large caps lower on a day that also saw the S&P 500's seven day winning streak come to an end, be it by an ever so slight margin. Trading volume was indeed elevated, very possibly as much to do with a bit of profit taking as anything else, for it was a good week, broadly for equities. In fact, it has been a good three weeks or so, in general, across the equity landscape. Over the past five sessions, in aggregate, it was the Dow Transports (+3.83%) that lit the path, while small-caps performed as laggards, but impressive laggards at that, as the S&P 600 gained 1.26% and the Russell 2000 increased 1.13% over the week in its entirety.

The backstory was one that has started to tilt in a more positive direction. Third quarter earnings, with 23% of the S&P 500 in the books, have remained market supportive. According to FactSet, 84% of these companies have reported upside surprises on profitability as 75% have beaten expectations for revenue generation, which is key because this is the quarter that was expected to show some serious margin pressure. That said, most of these firms do appear to be cautious in setting up the current quarter and next year for both analysts and investors. As the markets have climbed out of the September into October correction, the S&P 500 once again trades at 21 times next 12 months' earnings.

Interestingly, as markets gave a broadly "green" signal for the past week, it was just as clear that away from the transports, and the fact that all 11 sector select SPDR ETFs closed up for the week, that defensive sectors outperformed both cyclicals and growth. Growth itself told quite a tale. Technology (XLK) was strong (+1.6%) as both the Dow Jones US Software Index (+1.96%), and Philadelphia Semiconductor Index (+1.69%) had nice weeks, but Communications Services (XLC) came in last place for the week (+0.07%). Internet stocks held down the entire sector as Snap (SNAP) earnings reverberated around the entire industry group. All hail Apple (AAPL) . The Dow Jones US Internet Index gave up 0.82% for the five day period.

Think about this. China remains an uncertainty, as do clogged, and constrained supply chains. The short-term future of domestic U.S. fiscal policy remains uncertain as well... as does the path of the SARS-CoV-2 coronavirus. Globally as well as domestically... the pandemic remains an anchor dragging on economic growth. I have already told you that the Dow Transports closed up an incredible 3.83% last week. Heck, the Dow Transports closed up 0.9% on Friday as markets closed off. What if I told you that the Dow Jones US Airlines Index got simply pasted (-4.2%) last week, yet the Transports still "rolled"? Hmm... Even as September data for Industrial Production badly disappointed.

Inflation is clearly messy. House Speaker Nancy Pelosi thinks that Congress is very close to a deal on passing a budgetary framework. The future tax regime is still unknown. The future of monetary policy appears to be following a more certain path. (The Fed has gone into their blackout period ahead of the November 3rd policy decision.) The pandemic has caused a greater shock to economic activity, especially organic economic activity than many seem to understand, as swift and continued action taken by fiscal and monetary policymakers supported and replaced actual activity where necessary since this crisis started.

Still, a year and half later, there is a severe demand/supply imbalance, due to the nature of global supply chains and an uneven approach to the pandemic across nations... that was unavoidable. This supply problem stretches into labor markets. An estimated three million Americans have retired earlier than they might have, had there never been a COVID pandemic. That's 60% of your unfilled jobs right there. The rest are likely households that got by on two incomes pre-2020, that can no longer "afford" to have two productive adults working outside of the home for the bulk of the day, despite the fact that they can neither "afford" the luxury of keeping one earner home.

On Saturday, I had to run some errands. I hit the deli. Long line. "Help Wanted" sign in the window. I trekked over to the pizzeria. Same thing. Finally, I had to pick up my wife's meds from the pharmacy. "Closed" due to lack of staff. Major national chain. Closed in the middle of the day because they did not have someone available to fill prescriptions. That's dangerous. Like it or not, wages are going to be what's sticky about this current bout with inflation, whether or not there is a transitory characteristic to the headline data. Unemployment is headed for absolutely historic lows, unless folks my age come out of the pandemic induced early retirement and participate.

Treasury Secretary Janet Yellen sees elevated prices lasting into mid-2022. I agree. I also see that as transitory. Elevated pricing only becomes permanent once the temporary factors that have forced prices higher are ironed out, and inflation then fails to abate. That's when we can call inflation... structural, and not before.

One distinct positive takeaway from all of this, and a more than tertiary factor in this inflation is the fact that as a nation, we have not yet seen any real demand destruction. Price discovery is still finding its level across any number of corners of this economy. The short to medium term will favor those with pricing power who deftly straddle the line between seeking the correct price point and asking prices that force the bid side of markets for goods and services to back off.

Do higher nominal yields restrict economic activity? In normal times? Yes. Right now, I'm not so sure. The US 10 Year Note pays 1.66% this night/morning, which is up a little from Friday. What was the September headline print for CPI? 5.4%? How about the Fed's favorite measure, the much more forgiving print for headline PCE inflation? 4.3%. Hmm, as anyone can see, real yields have contracted throughout the pandemic relative to the rate of inflation, which has been more driven by energy commodities and services than anything else.

This becomes an issue once my "transitory" narrative plays out. Until, then... it's hard to see the foreign thirst for yield allowing the long end of the Treasury curve to develop naturally as it might have in a more economically isolationist model. This will force capital back into equities as well. I do not expect these forces to leave no scars. There will be volatility, perhaps excessive volatility as the post-pandemic economy takes shape here, or there, and while pandemic shutdowns go on and on somewhere else.

Pricing power is everything. That's what some transports have right now, and will have for sometime moving forward... probably enough in the way of addressing somewhat increased inelastic demand for energy based commodities, unfinished material goods and on a shorter timeline, delivery services through the holiday season.

What I am telling you is that I think the recent (very) robust breakouts for the rails, such as Union Pacific (UNP) , CSX Corp (CSX) , Norfolk Southern (NSC) , and for delivery services operations such as United Parcel Service (UPS) and FedEx (FDX) , are sustainable for as long as the current winds of inflation persist, and for as long as those winds are fanned by the same forces as are now present. 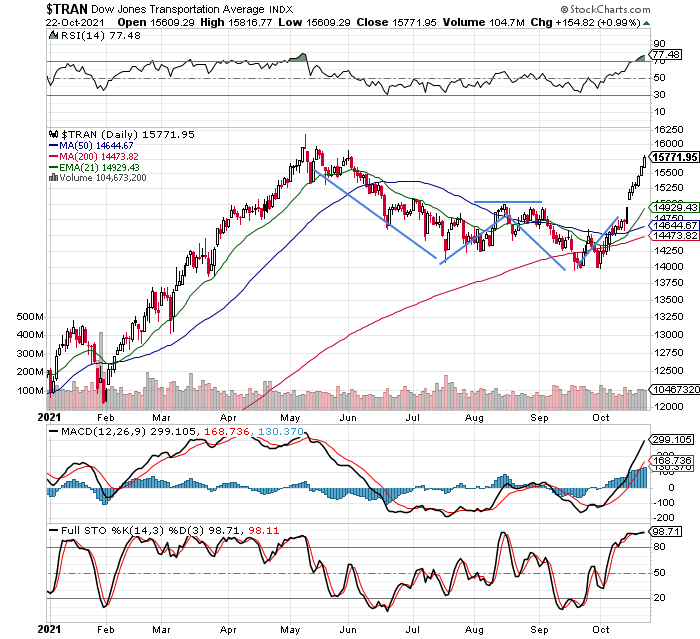 Readers can see, the double bottom, that if this were a stock moving off of a pivot (14,989) like that, it would have a target price up close to 18K. Relative Strength, the Full Stochastics Oscillator, and the daily MACD all scream together "Sarge, we're overbought", which is true. Technically. However, these prices are being driven by forces that lie outside of the ability of technical analysis to properly capture the nature of those forces at work. This performance includes the airlines, which have been an absolute drag on price discovery. witness this...

The rails will rally on higher prices for cargo/energy based commodities whether or not volumes lighten up. Breakouts aplenty...

Keep in mind that as smaller cargo ships make their way through the Panama Canal to unload up and down the U.S. east coast (New York, Savannah, Florida), this will benefit a player such as Norfolk Southern, which serves 22 eastern states and until now has had to rely disproportionately upon coal.

Then there's the Santa rush, and who will pay what to get whatever it is to whomever they are. And on time? Check out the strength in UPS...

This can only help the underperforming and questionably managed FDX...

Both UPS and FDX still have upside gaps to fill. In my opinion, these five names are currently "strong buys'', and I have added to four of the five recently myself, having missed my entry point in NSC. Fortunately across the rails, this name has been the laggard to date. I think laid out this way, even our newer readers will see the breakout beyond pivot underway across the rails as well as the favorable set-up for delivery services.

I hope I haven't hit you with too many charts this morning, but I really think the charts for these groups and these five names show a serious shift in capital flows to support where pricing power is expected to reflect inelasticity in demand. Might I be wrong? I might. My book is betting that I am not, however. On that note... Rock and Roll.

Get an email alert each time I write an article for Real Money. Click the "+Follow" next to my byline to this article.
TAGS: Earnings | Economic Data | Economy | Investing | Markets | Stocks | Technical Analysis | Trading | Transportation