Like any competitor. The trader. The investor. On the eve of the perceived kick-off of earnings season, sleep becomes scarce. Thoughts race. Ever play for a championship? Any championship. Same deal. At least up until the bell. Citigroup (C) will go to the tape this morning with the firm's fourth quarter results, batting lead-off for the banks, who as a group will bat lead-off for the entire sphere of public equities.

Less is expected this season from corporate America. Even less of the financials. We have watched over weeks as expectations for Q4 earnings growth across the S&P 500 have in broad terms contracted from 17% to 14%, to 12%, and now some analysts are unsure if these results will be able to print at double digit percentage year over year growth. If that in fact does happen, this would a fifth consecutive quarter, but still a slowing in the pace of growth from the more than 20% experienced for the third quarter. Not that those robust looking profits did much for equity performance.

We do know a few things ahead of time. We already know that Apple (AAPL) , Micron (MU) , Nvidia (NVDA) , and Federal Express (FDX) all either lowered revenue guidance last quarter or warned ahead of this one. Keep in mind that those high profile names do not even include the energy sector. The dramatic fall in crude pricing over the past quarter has hit this group extremely hard, forcing the most dramatic reduction in expected revenues for this reporting quarter than seen for any other sector over the past two weeks. This week will be about the banks though. More on them below.

That moment when you realize that there are no roads, there are no paths. The easy way is the wrong way, and from here... you'll be bushwhacking it. Machete up front. Taking turns. Careful. Last thing we need is someone down with a machete sticking out of their calf. Not all the way out here. What's important? Far more than profits, in my opinion, as profits are subject to conditions that impact margin, are revenues. Profit per share might be influenced through reductions in share count, or something beyond a firm's control, such as the ongoing trade dispute with China, monetary policy or a government shutdown that prevents certain payments from being made.

Revenues are nothing but the truth, and expectations for revenues realized are really expectations for demand and pricing power against projected conditions of surplus and scarcity. That said, though corporate revenues across the S&P 500 may or may not squeeze out 11% earnings growth this season, revenues are thought to have growth by less than 9%, which would be off of the 9.2% y/y growth seen in Q3. It gets far worse. Revenue growth for fiscal 2019 is projected at levels between 5% and 6% for pretty much each quarter. On top of that slower revenue growth, will be the waning positive impact of comparable tax rates. This season will be the last season where earnings growth is "artificially enlarged" by a 21% base corporate tax rate versus a 35% rate. That means year over year margin compression as well.

The numbers speak for themselves. Ugly. The Chinese economy, often thought to be the engine behind the planet's economic growth is slowing. Perhaps much more quickly than previously thought. Sure, the trade surplus looks large for the entire year, but the numbers behind the numbers for the month of December are awful. The Chinese economy, still reliant upon the manufacture and export of goods, saw exports print at -4.4% y/y for the month versus expectations of a rough +3%. The trade war between the planet's two largest economies would be easy to blame here, but one might think that those preparing expectations for this print were likely aware of the global trade condition. No? Then there are imports.

For December, against y/y expectations of about +5%, imports into China printed at -7.6%. No kidding. More like no demand. What do these numbers mean? Well for one, they paint a risk-off picture for global equity markets as Sunday night turns into Monday morning. No, what does this all mean for U.S. stocks? Well, it's not that easy to tear U.S. markets away from global markets. Obviously though the Chinese economy appears to have been badly damaged by the dispute with the U.S., the global economy is slowing as well. Markets for exported Chinese goods must be contracting across Asia and Europe, not just here. What happens now?

The PBOC will be forced to ease policy. The ECB, the BOJ, the BOE will all be forced by circumstance to stop short of proceeding with expected withdrawal of ultra-loose monetary policy. The planet falls back into relying upon the resumption of coordinated global easy money policies, and irresponsible fiscal policies to drive growth. We all know that this only pulls forward consumption, and thus limits the bounds of potential growth by just that much more each time we go to the well. I have worked as both an economist, and a trader. The economist knows that a reckoning is out there, inevitable. The trader, in the meantime, is going to try to take advantage of the environment provided.

The marketplace has priced in a lot. Even some hope of late. The truth is that we just don't know much. The dispute with China could be all cleaned up by March 1st. Then again, would it surprise anyone should this dispute drag on forever? Is it really much of a stretch to imagine a trade dispute turn into something else due to the issues over intellectual property rights. You have listened to Vice President Pence? It won't take much to turn a trade dispute to a strategic error. That would be but a small step that both sides are more than capable of.

Then there's handicapping monetary policy, which we all know lags in terms of real feel by the better part of a year, at least. How to completely price in a more hostile environment? Any ideas? Even if the FOMC lays low on the Fed Funds rate all year, they are still winding down the balance sheet aggressively. That still draws liquidity. Still tightens monetary conditions. Do we need to go into the government shut-down? Or Brexit? I for one never expected the shutdown to last this long. We do know that 380K furloughed workers will show up as unemployed in the next Employment report. Then there are the 420K workers who are working without pay. That group will not even show up as unemployed. Think their families are spending a lot right now?

Forward looking valuations across the S&P 500 have rebounded a bit, standing as of Friday's closing bell at 15.1 times next 12 months' projected earnings. Looking at each sector individually, the financials are priced well below each and every other group. As a sector, according to FactSet, the financials are priced at just 10.8 times. That's a 13.6% discount to the group's 10 year average. Only the Energy sector is trading as a group at a greater discount to it's own 10 year average forward PE. Why is so little expected from the banks?

For me the obvious signal is sent by a flat yield curve, which should in theory pressure net interest margins, or how money is made through traditional banking means. In addition, weak equity markets usually mean at the end of the day... less business for investment bankers. Who goes to market while valuations are soft, except for the desperate. Trading? Volatile markets offer more opportunity in the way of profitable trading. Right? The truth is that in recent quarters, a choppier trading environment has not meant as much as it used to for a lot of these banks. Goldman Sachs (GS) should be a big winner here. We'll see what they have to say on Wednesday. I don't trust them enough to invest. Not without some positive numbers first.

Where am I gong with this? I am underweight the banks as a group. I will not completely disengage. Diversity is a core discipline. That said, you have seen the numbers out of China. The numbers are lousy across much of the globe. This country will not thrive alone. That is plain to see. You do not need an actual slowdown to hurt the banks, Fear of a slowdown is enough. With an already mentioned reduction in the investment banking side of the business, a slow down would also manifest itself in further slowing in both mortgage origination as well as refinancing. What is left is that volatile environment. Better make good.

Though underweight, I continue to maintain my long position in JP Morgan (JPM) . They report on Tuesday. Why did I not cut and run on this firm, as I had in the cases of both Citigroup and Goldman Sachs (best out ever) earlier in the year? Simple. As a financial institution, JPM is best in class in my opinion. The stock is valued that way to versus the other big names in this space. Goldman, Citi, Wells Fargo (WFC) , and Morgan Stanley (MS) all run with single digit forward looking PE's. Besides being balance sheet sound, JPM stands atop the pile in terms of profit margin, PEG Ratios, and perhaps most importantly, price to book ratio. Oh, the firm also pays investors a 3.2% yield just to be there. This is the one name in the group that I will be willing to add to on a dip. 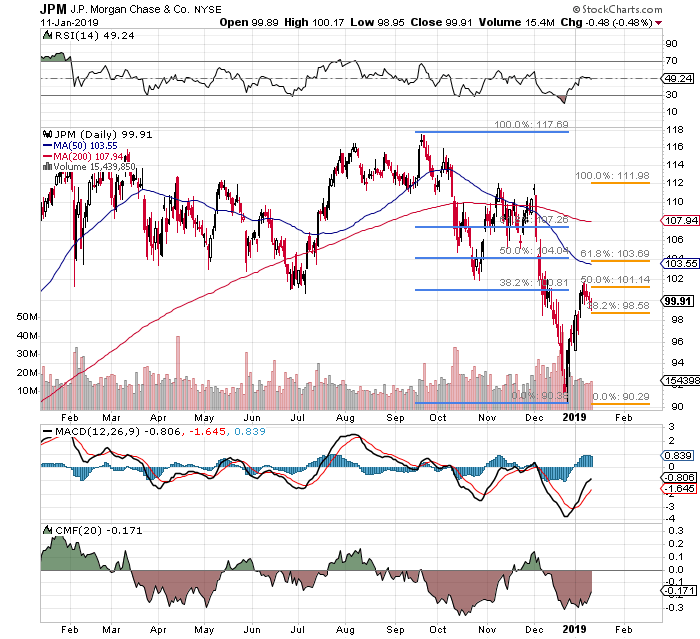 One thing we see in this chart is that though Relative Strength and the daily MACD both send better signals of late, Money Flow has gone nowhere. Fibonacci models suggest resistance in the $101 area regardless of whether the model that begins with the September high of the December cliff are used.

My personal plan would be to add anywhere in the low to mid-$90s on Monday if broad market weakness should allow. I will at this time cut my target price to $112 from the previous level of $114.

Get an email alert each time I write an article for Real Money. Click the "+Follow" next to my byline to this article.
TAGS: Earnings | Economic Data | Investing | Markets | Options | Stocks | Technical Analysis | Trading | Banking