I am going to go out on a limb and guess that at least a few of us have been "the commuter." For those who wait for trains on crowded platforms, or for buses in the rain, this is your tale. There comes a time, usually about 10 minutes past scheduled departure, that your train or your bus pulls into view. And stops. Red signal? Any reason at all? Nobody knows. You do know that there will be no announcement made. As if on cue, a thousand or more folks (maybe more) will check their wrists, or cell phones. The time can't possibly be right. I have a meeting, or a conference call. The boss already told me "The early train is never late." Stress.

We all stand together on that platform staring at headlights that barely seem to move, yet each one of us is locked in our own private echo chamber, as every stinking one of us plans on how to proceed with defending those who need us most. As broader equity indices have managed to grind higher over the early days of April, trading volumes have wound down significantly. Those headlights seem to have illuminated the creatures of the night. A Boeing (BA) needs to cut production. A General Electric (GE) runs into a high profile downgrade. Sector rotations. Inverted yield curves. Better to hug the ground. Leave no silhouette. Embrace darkness.

There are those who might look at a broader market that really opened low and spent the day, or the week, working higher, and see no conviction in the moves made. That may be very true. Yet, when the wind blows, the weeping willow not only bends, it sways. Think about that deeply, please. For, if there were an unsettling wind ahead of the coming already mentioned train, than would not the marketplace already have felt volatility increase far more than it has? What does the twisted mind discover in the darkness of night? Plain as the light of day. There has been no institutional selling ahead of earnings season, my faithful friends. This does not mean that we, as traders and investors, can fall asleep at the switch. That said, we never have. Just one item to keep in the back of that head of yours. The big money movers are either positive or uncertain moving toward the kick-off of a season attached to rather nasty expectations. Makes me think... hmmm.

It comes. The optimistic among us will see projected first quarter earnings that for the S&P 500 in aggregate are expected at -2.3% year over year. That is if one follows Lipper Alpha Insight, or -4.2% y/y for those tracking FactSet. The two are remarkably close on revenue, with both seeing growth there in the high 4%'s. Key to focus on ahead of Friday's banking numbers are two items... JP Morgan's (JPM) Retail Conference set for Wednesday, and then followed by the Walt Disney Co.'s (DIS) investor day on Thursday.

With both Walmart (WMT) and Disney (DIS) currently trading close to extremely key levels technically, it may behoove at least this trader to take something off. Walmart simply must hold $97/$98 in order to not see $93. As for Disney, the significance of the action at or close to $115 can not be stressed enough. That $115 level is a swinging door. Depending on what CEO Bob Iger says on Thursday regarding not just future revenues, but future margins, I believe we'll have this name trading at either $121 or $107, and I do not know which. Adjust risk accordingly.

News breaks that the Trump administration is working toward the implementation of placing tariffs on $11 billion worth of imports from the European Union. I know that at least half of you disagree with me on the use of tariffs as a tactical weapon in cross border negotiation. Do any of you really think that China would have come as far down the road as they have, if as in the past, the U.S. had simply requested that they change their ways?

The EU is on the ropes. The economy there is in flames. Donald Tusk and Jean-Claude Juncker meet with Chinese premier Li Keqiang in Brussels this day (Tuesday) in a summit of their own. This, after the EU named China a "systemic rival". The EU, as is the U.S., is seeking a more reciprocal relationship. Do I even start on Brexit? We all know the UK without the EU is in better shape than the EU without the UK.

What better time to pursue some action under the 1974 Trade Act, as these tariffs will be aimed at correcting markets for civilian aircraft as well as some agricultural products. The case of the EU subsidizing Airbus (EADSY) was first brought before the World Trade Organization in 2004, and has been in litigation ever since. 2004! Just in case there are some who might see patiently waiting 15 years before possibly taking action as somewhat rash.

I don't see anything here that dramatically impacts the U.S. economy anywhere close in terms of scale to what has transpired between the U.S. and China. The U.S. is in a way defending a great American company (and employer) when they need it most... in a justifiable way. Correct me if I'm wrong, but is this not part of what they are supposed to do?

The iShares PHLX Semicounductor ETF (SOXX) has rallied 28% year to date. Relentless. Chip earnings will rally later in the year and all will be well. Right? So dependent upon price pressure created by oversupply, then hopes for a potential boom in demand. China trade deal? What are they going to buy in size? Thoughts of aircraft, soybeans, and semiconductors roll around in my head as the fastest way for China to reduce the bilateral trade deficit.

"Not so fast." came the cries from the peanut gallery. First Infineon (IFNNY) cut 2019 forecasts for revenue. Then again Infineon is a German firm. On Monday, Cowen's Karl Ackerman downgraded Micron (MU) , while Andrew Garthwaite of Credit Suisse took the whole group down a peg. Credit Suisse is concerned about both expanding valuations for the industry as well as lengthening cell phone cycles.

My thoughts? Even here, I don't want zero exposure. I remain long Advanced Micro Devices (AMD) . All hail Lisa Su. I remain long Micron, only because I realized while selling it, that doing so had been to that point, a mistake. Don't fight the tape. Learned that when I was just a pup. The unfortunate sale for me was Intel (INTC) . That one I did not really want to sell, but due to the nature of the way I run my business, I was called away, having sold calls at what seemed to a fair price at the time... against my long in order to manipulate net basis. Hence I have missed out on almost three dollars of positive movement in this name, waiting for a meaningful discount, so that I could re-engage without playing the fool. So far, no dice. 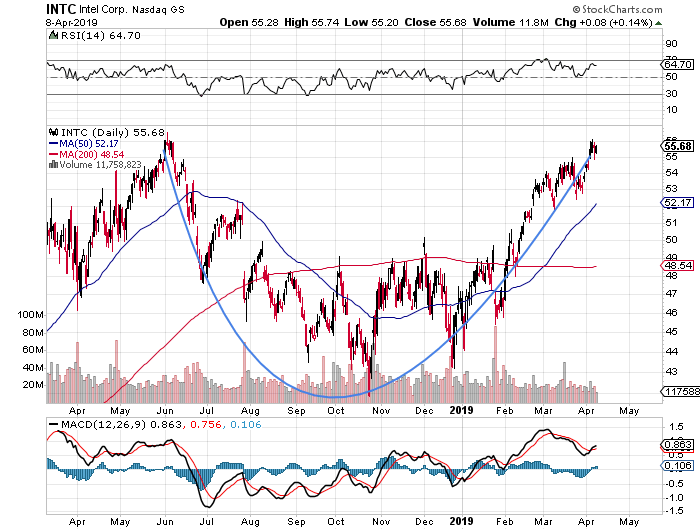 What I see here, besides a 100% retracement of last June's selloff, is a giant cup, within my opinion... no handle. Some might see selling in late March as a handle. For those folks the pivot would be the $55 level. For me, I think we still would like to see the building of a downward sloping handle that will provide, at least for me, an advantageous point of entry. Keep in mind that earnings are due in two weeks (April 25th) for this name.

My belief is that CEO Robert Swan has this firm focused on the right products after last week's dog and pony show. I mean launch event. I believe in the entire evolution story for the business cloud, and it's apparent that that's where Intel is headed as well. I am not simply going to go out and buy Intel at the top of the chart, however. I am too old for such foolishness. This is how I would go about entry in such a situation.

Note: The purchase of a call option allows for participation to the upside, while selling a cascading series (you can take this further, allowing for risk tolerance), permits the building of a position at a discount to where the investor had originally been interested should the shares come in by expiration. The trade is set up to be premium positive, meaning that the puts sold pay more than the expense of the call(s) purchased.

(JP Morgan and Disney are holdings in Jim Cramer's Action Alerts PLUS member club. Want to be alerted before Jim Cramer buys or sells JPM or DIS? Learn more now.)

Get an email alert each time I write an article for Real Money. Click the "+Follow" next to my byline to this article.
TAGS: Earnings | Investing | Markets | Options | Stocks | Technical Analysis | Trading | China | Europe | Market Recon