Amin explained that ELF has been investing for long-term sales growth and the earnings shortfall reflects that investment.

The On-Balance-Volume (OBV) line turned sharply lower in January showing us of a rapid shift from aggressive buying to aggressive selling. The Moving Average Convergence Divergence (MACD) oscillator has slipped below the zero line this month for an outright sell signal.

In this weekly bar chart of ELF, below, we can see that some weakness has begun. Prices are pulling back towards the rising 40-week moving average line.

The weekly OBV line shows a peak in late December as traders became aggressive sellers. The MACD oscillator has crossed to a take profit sell signal in this longer time frame.

In this daily Point and Figure chart of ELF, below, we can see a potential downside price target in the $19 area. 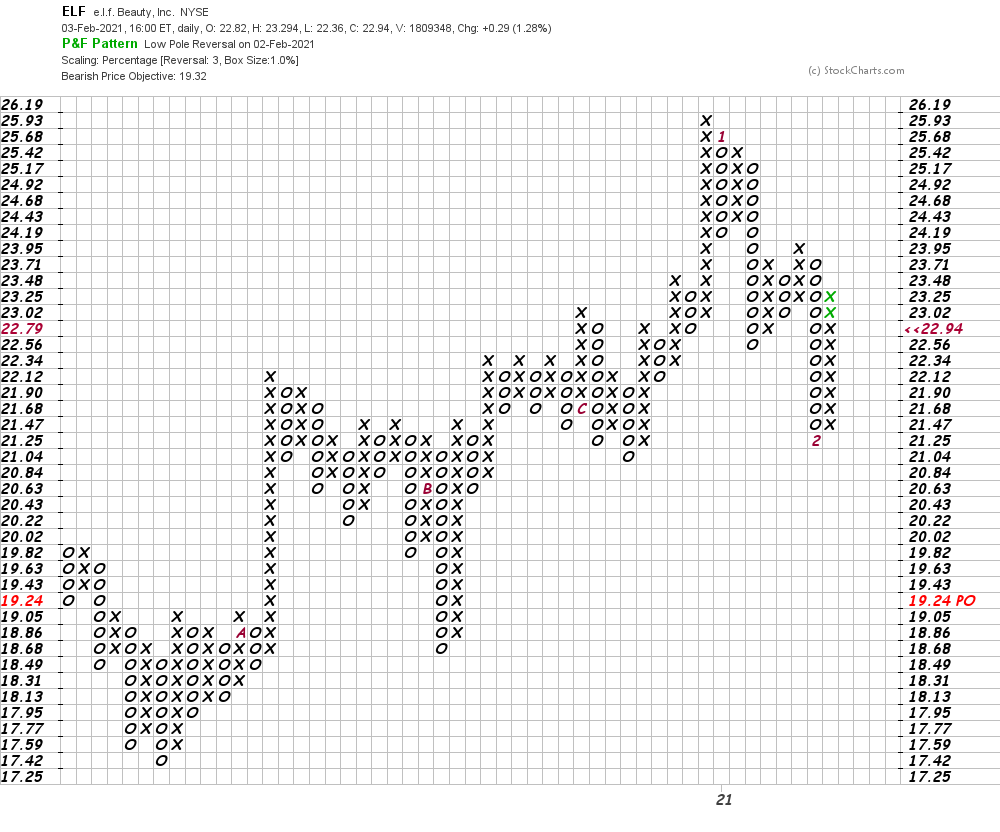 In this weekly Point and Figure chart of ELF, below, we can see a potential longer-term price target in the $35 area. I do not know if this target will still exist if prices decline to $19 first. We'll have to see.

Bottom line strategy: We had a positive view of ELF back on September 23. ELF rallied but changed direction at the beginning of the year. Traders should stand aside of ELF and let this correction play out. A decline to $19 is not a problem but the bigger risk is a break of the support around $18. (In full disclosure, I have been a fan of Alicia Keys from when she opened for the late Al Jarreau.)

Get an email alert each time I write an article for Real Money. Click the "+Follow" next to my byline to this article.
TAGS: Investing | Stocks | Technical Analysis | Trading | Retail | Mad Money | Executive Interview | Consumer Discretionary