Of Wolf And Man

Shape Shift, Nose To The Wind

Shape Shift, Feeling I Have Been

Earth's Gift, Back To The Meaning

Back To The Meaning of Wolf And Man

The hunt. For stocks? For truth. What is truth? A down day for equities on Thursday seemed to almost shock traders, as if it were some kind of rude slap in the face. Silly? Of course. Then, again, markets often overshoot and then correct. This is what passes for price discovery in 2019 in our perversely fractured, intentionally opaque marketplace. You do already know that you were conditioned so as not to trust a centralized marketplace where traders on both sides had to identify themselves on every trade by audibly announcing not only their badge numbers, but also the sell side firm that they were "giving up" on that particular trade, right? Did not feel like speaking up? You bought and sold exactly nothing. Transparent? To say the least.

Even with the silly games now played, we see them racing. We see them because we try harder than they do. We watch their repetition. We see their sniper programs. We laugh as they force each other up or down to levels that mock the concept of price discovery. Oh they are far too quick for humans to compete with on speed. So it is that we compete on price. For they have forgotten about price, they only hunt profit measured in micro-seconds. While they rely upon their programs to do this, they read the sports pages, or laugh at 13 year-olds falling off of skateboards on YouTube. They have forgotten that they need to fight us. I laugh at the folly.

Equity indices up? Equity indices down? Not only do they not know, they don't care. As long as the machine keeps doing what it's doing. We know that the retiree still cares about price. We know that the parent trying to pay a king's ransom for tuition still cares about price. We know that the six month old who has no idea, needs us to care about price. Real price discovery is not measured in micro-seconds. Price discovery is measured in dollars and cents. It may come in the form of lightning. It may not come very quickly at all. Price discovery does need to be taken seriously. This requires buyers and sellers to seek each other out and have conversations. In the light. Out loud. Until then, we hunt.

Equity markets finally took a breather on Thursday. That was to be expected. I mean, seriously. The S&P 500 had run 2% over the past month. From the trough on October 3rd to the peak close on Wednesday, that run was more like 6.8%. I've been through a few rough Octobers in my day. When my name is mentioned for the last time, this will not have been one of them.

It happened early. Bloomberg TV reported that the Chinese side might think that a long-term deal with the U.S. might be beyond reach. My thought might be let's just get a Phase One agreement signed before worrying about a more comprehensive deal, but a match had been lit. Moving on, the House of Representatives passed strictly along partisan lines, a resolution to initiate the public phase of an impeachment inquiry into the President of the United States. The lit match had found kindling. Algorithms love political risk.

A lot was also made of the very weak October print for the Chicago PMI that showed a collapse in New Orders as well as Order Backlogs. I have written often on the Chicago PMI as a data-point. The series is well known among economists as wildly volatile, and often misses and/or beats consensus by wide margins. Somehow, the street for the most part failed to incorporate the General Motors (GM) strike into the collective rationale when considering this survey. They'll likely see some impact, but on the national level when the ISM survey hits the tape later on Friday. Before that, traders will have to do the whole dog and pony show that the BLS brings with it on "Jobs Day." Psst... the GM strike could show up here too. The algos will do their thing. We will keep our heads about us.

Trading volume exploded to the upside on Thursday at both of New York's exchanges. Meaningful distribution? I have some doubts. One day after the Fed, one day ahead of the BLS, last day of an "up" month. Markets rallied hard into the close, which is when the most trading volume occurred. As per usual. Still, for the day, declining volume did beat advancing volume by roughly two to one.

Health Care. The Select Sector SPDR ETF (XLV) soared 5.13% over the past month. The sector in aggregate trades at less than 15 times forward earnings versus more than 17 for the S&P 500. Yup. Health Care providers had a pretty good month.

That's what +11.6% in a month looks like. Centene (CNC) screamed 22% higher to the period. Cigna (CI) , UnitedHealthcare (UNH) , and Humana (HUM) all ran between 15% and 17% if you're stuck for names to consider. How about Big Pharma? Or Bio-Tech? Talk about political risk? Suddenly not so sure. I mean, of course. The nation enters an electoral season. The drug companies for the most part, have no friends on either side of the aisle. The space is a political football. Unless, being forced by the machinery of modern politics, these folks down in DC forget to do the work of the people. Will the need to either vilify or defend the president 'trump' other concerns? Those concerns include funding the government. Funding defense. Plenty to distract.

At more pedestrian October growth of 4%, this group moves just a bit under the radar. Bio-Tech as a group has been even stronger, +6.5% for the month.

Still, extremely low multiples. Extremely high margins. Cash flows. Dividends. There 's a lot to like, at least for investors. My current longs in these industries are Amgen (AMGN) , Merck (MRK) , and AbbVie (ABBV) . Plenty of others look fine, too. While I want exposure, I also don't want to get overexposed. I did just tell you that this is a political football. That reminds me...

BeiGene (BGNE) soared after the close on Thursday evening. American Depository Receipts of this Chinese BioPharma closed at $138.34. The last sale that I see (it's still dark and will be for a while) is an even $175. What gives is an announced collaboration with Amgen in the development and commercialization of various cancer therapies.

The results of this complicated agreement are that the two firms will go to market with Amgen's Xgeva (bone health), Kyprolis (cancer) and Blincyto (cancer) in China over the next five to seven years sharing equally the profits/losses. The two firms will also work toward developing 20 other Amgen cancer treatments with BeiGene taking care of the Chinese side of this work. As part of the arrangement, Amgen will take a 20.5% stake in BeiGene for roughly $2.7 billion, or $174.85 per ADR.

Now, Amgen which was up a percent on Thursday, has not really traded off overnight. Should weakness develop on Friday in response to this capital outlay, this would interest me as an investor. 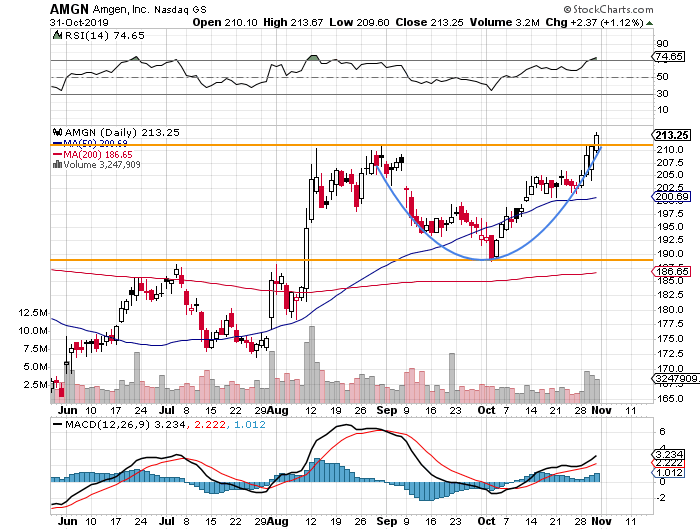 I will tell you what I see, and then what I think might develop. I see a basing period after a rise in price. This is framed in orange, and the shares appear to be breaking out from a pivot of $211. Now, should there be a controlled selloff in response to this news, the base would then become a cup, the selloff that has not happened yet? A handle. Still with me? This is where hopefully a discount comes in.

Now, see that 50 day SMA? That line does get pierced from time to time, but never for that long. That spot is now at $200. That's where I would love to add. We get that move, and then out pivot moves from the $211 high of late August to the $213 level which would then be the right side of the cup. (The top of the right side of a cup is always considered a pivot, meaning that it either becomes resistance, or a springboard for a breakout.)

(UnitedHealth and AbbVie are holdings in Jim Cramer's Action Alerts PLUS member club. Want to be alerted before Jim Cramer buys or sells these stocks? Learn more now.)

Get an email alert each time I write an article for Real Money. Click the "+Follow" next to my byline to this article.
TAGS: Investing | Markets | Options | Politics | Stocks | Technical Analysis | Trading | Healthcare | Pharmaceuticals | China

The Fed Is More Hawkish Than the Market Anticipated

For the third time this week, buyers stepped up on extreme computer-generated selling.