Tuesday trade started innocently enough. The macroeconomic picture had at least started to improve. On Monday, both May Durable Goods Orders and May Pending Home Sales had decisively beaten expectations. The Atlanta Fed had adjusted its Q2 GDPNow model, increasing its estimate for gross private investment in response to the housing data, from -9 to -8.1, which was enough to lift the real-time estimate for the period from growth of 0.0% to 0.3%.

Hardly robust, but on the right side of the zero-bound if you're trying to avoid a technical recession. Remember, once you're in a recession, households and businesses change their habits and become very careful with any planned spending. The term "technical recession" is but a way of avoiding the realities of economic contraction which are best avoided in the first place.

As Monday melted into Tuesday, equity index futures were trading higher. The macro started out okay. The Goods Trade Balance for May was awful, but awful had been expected. Both HPIs (Case-Shiller, FHFA) hit the tape at 9 am. Both were hot. Hot had been expected.

That's when things got gnarly. The Conference Board's Consumer Confidence survey for June hit the tape at 10 am ET. That index dropped to 98.7 from 103.2 in May, hitting its lowest level since February 2021. It wasn't the "Present Situation" that was so bad. That number printed at 147.1, down slightly from 147.4. It was the public's expectations for the short to medium term future that did the damage. The "Expectations" index slid all the way to 66.4 from an already bleak 73.7.

Released alongside the Consumer Confidence survey, was the Richmond Fed's Manufacturing Index. I see that consensus had been for +2 for the month of June. Readers of Market Recon know that I was at -8.3 coming in, which was not quite pessimistic enough. For the month of June, the Richmond Fed Manufacturing Index, arguably the nation's second most important regional manufacturing survey (second to Philly), hit the tape with a headline print of -11. I have seen a number of news agencies report the headline as -19. I am looking at the Richmond Fed's website. I see -11, which was down from May's -9 and April's +14.

Shipments printed at -15, while New Orders, which are the lifeblood of any manufacturing survey, simply crashed to -26 from May's already dreadful -16. Local Business Conditions dropped to a ghastly -28. Where was the growth within this report? In Wages (+36), and in Number of Employees (+16). This bodes poorly for the future. It appears that just as Richmond regional district manufacturers are catching up on the demand for labor front, the demand for goods that drove that demand for labor has gone ice cold.

Richmond was the fifth of the five regional Fed districts that economists tracking the manufacturing sector keep a close eye on. For June, the Empire State (New York Fed) led off with a headline print of -1.2, followed by the Philadelphia Fed at -3.3, the Kansas City Fed at -1, and the Dallas Fed at a rather nasty -17.7. Oh for five. If all five of these regional manufacturing districts went into contraction in June, how far can a negative growth print be on the national level?

The S&P Global (formerly Markit) Manufacturing PMI flashed at 52.4 last week for June versus consensus view for 56.0 and down from May's 57.0. That number will be revised this Friday. If final, that 52.4 print would be the weakest month for the series since August 2020. The ISM Manufacturing Index will also hit the tape this Friday. Currently, Wall Street is looking for something with a 54 handle, maybe as high as 55. I am also at 55, which would be down from May's 56.1. A downward surprise, though... really would not be very surprising after all.

All that said, the Atlanta Fed will next revise its model for Q2 tomorrow (this Thursday) after the BEA releases Personal Income and Outlays for May. If you blink, they revise again on Friday after that ISM print and May Construction Spending data are published.

Hence, all of the talk around recession that had abated, at least for a day, returned with a vengeance, supported by a Cathie Wood interview on CNBC, where the CEO of Ark Invest (ARKK) opined that the US might already be in a recession. I mean all of us know that the US is either in a recession already or is this >< close. A high-profile investor saying so on a highly followed financial network, does however, unleash the wonders of algorithmic, electronic "keyword reading" price discovery.

A 1% gain for the Nasdaq Composite 15 minutes into the Tuesday session turned into a 2.98% decline. The Nasdaq 100 had it slightly worse, at -3.09%. The S&P 500 followed suit with a 2.01% decline of its own, while the smaller cap indexes and the Dow Transports outperformed the large cap majors. All, though... were down a minimum of 1.4%.

Ten of the 11 S&P sector-select SPDR ETFs shaded red for the session, with only Energy (XLE) in the green. Has the worm turned? Energy has led both Monday and Tuesday as WTI front-month crude has gone from trading with a $103 (per barrel) handle last Thursday to trading with a $112 handle this morning. Consumer Discretionaries (XLY) led the declines at -3.99% on Tuesday, followed by Information Technology (XLK) at -3%, and Communication Services (XLC) at -2.91%.

The Philadelphia Semiconductor Index gave up 2.63%, despite the +3.48% Apple (AAPL) inspired performance turned in by Qualcomm (QCOM) . Qualcomm was more than countered by the downward spirals experienced by Sarge names Advanced Micro Devices (AMD) , Nvidia (NVDA) , and Marvell Technology (MRVL) . Yes, I still hold core positions in all three of those. Yes, I have been trying to trade these names around these steep declines. Yes, that does soften the blow. No, not completely.

All three would benefit (more than their peers) if China ever fully reopened. The entire space needs Congress to wake up and pass the CHIPS Act. Failure to act will result in a lost generational opportunity to relocate large swaths of the semiconductor manufacturing business to the US, thus ensuring a solution to what has to be seen as a national security concern. Not like Taiwan is in a very good neighborhood.

For AMD, the selloff had a little extra bit of energy to it than for the rest of the semiconductor space. Rumors swirled on Wall Street that cyber-extortion group RansomHouse had claimed that it had intruded AMD's network on January 5th 2022, and obtained files containing 450 Gb of data. Word is that the data supposedly captured by RansomHouse contained network files, system information, and passwords. Rumor also has it that AMD may not have, or may not yet have paid a ransom to regain control over the stolen information. Very little coverage has been afforded this story by the mainstream media, making it difficult to learn anything beyond the opaque myself. Keyword reading algorithms that impact the point of sale, however... were all over it on Tuesday.

Switchblade unmanned aircraft (drones) might be in huge demand in eastern Europe. That has only helped the manufacturer... AeroVironment (AVAV) so much. The firm reported adjusted EPS of $0.30 (GAAP EPS: $0.29) for their fiscal fourth quarter, which missed consensus view by a dime. AVAV did this on revenue of $132.62M. This also fell short of Wall Street's expectations and amazingly amounted to a year over year contraction of 2.5%. Yes, you read that right.

The firm generated more revenue well before there was a large-scale war in Europe that supposedly ramped demand for what they make and sell. While the full fiscal year did provide for record revenue of $445.7M, the firm also posted a net EPS loss ($-0.17) for the year. Even more stunning. The firm's funded order backlog fell to $210.8M from $211.8M one year back.

I think the long-term balance sheet could probably be managed a little bit better. That said, the current situation is solid, and the firm should have no problem whatsoever meeting short to medium term obligations. 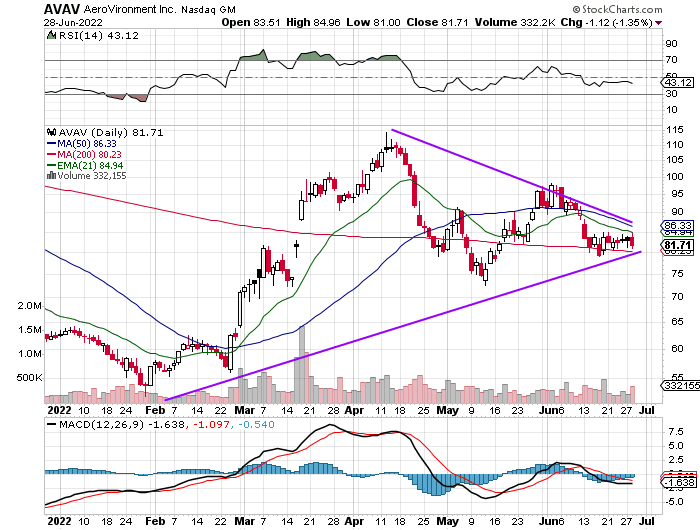 Readers can see that the five month pennant has apparently come to a close overnight with an explosive overnight move. During the call, management complained about persistent supply chain and labor market issues that dinged both revenue and margin. Those problems can not be corrected on the hop. The firm says that it is working with Nvidia (NVDA) and Intel (INTC) to create manageable lead times for the chips needed.

There is no doubt that aerial drones will continue to do the reconnaissance work and the pinpoint targeting of munitions on the modern to postmodern battlefield, especially where adversaries continue to focus on the use of massed conventional forces for offensive purposes. Does that mean that AVAV is a safe investment? Not necessarily. There are other players in the field, such as Kratos Defense (KTOS)  , who also trade at elevated multiples, but still fail to impress as an investment over the longer-term.

For this stock, the 200 day SMA at $80.23 presents as an issue. This red line has acted as support for most of June. The loss of that line will provoke portfolio managers to shed exposure. It's a matter of how much.

(XLE, AAPL, AMD, NVDA,  and MKC are holdings in the Action Alerts PLUS member club. Want to be alerted before AAP buys or sells these stocks? Learn more now.)