Look out below! Now, that's a warning. The fact that it came upon an inexplicable nearby parabolic rise in the stock would be quite unfortunate. The shares of Fastly (FSLY) tumbled badly (-4.4%) throughout the day on Wednesday. Then, it got ugly. Real Ugly. Real Fast. Overnight, the shares gave up another 30% or so. Fastly for those who don't know exactly what business we are talking about, operates an edge cloud computing and content delivery platform. Sounds like I really don't know? I looked it up just to make sure that I did not pass on bad information.

This is the deal. The company is expected to report third quarter financial results after the closing bell on Wednesday, October 28th. Two weeks. Rising share price. Time to warn. The firm expects Q3 revenue to now print in between $70 million and $71 million. The firm had previously guided to a range spanning $73.5 million to $75.5 million, so the upper boundary of guidance is now 3.4% below the lower boundary of previous guidance. This is obviously a big deal. The culprit, at least in part, was simply having too many eggs in one basket, and then having that basket upset.

Before reading this, one must understand that Fastly had previously disclosed that ByteDance, the Chinese parent of the TikTok application, was indeed the firm's largest customer. From the Wednesday evening statement, the company said, "Due to the impacts of the uncertain geopolitical environment, usage of Fastly's platform by its previously disclosed largest customer did not meet expectations, resulting in a corresponding significant reduction in revenue from this customer."

By the way, the firm also indicated that toward the end of the quarter (ending September 30th), "a few customers" used the platform less. Hmm, maybe this is broader than thought. I mean, if Oracle (ORCL) , and Walmart (WMT) end up with a stake in the TikTok app, and the app's availability in the U.S. goes on unimpeded, or if Microsoft (MSFT) somehow got back in the game, then perhaps this is temporary. Should the app become restricted in the U.S. or in a number of countries that see it as a security threat, then it becomes tough.

A lot of material is bouncing around the internet given the impact of this news story on that stock. I think the best piece on the name happens to have been penned by my Real Money colleague Eric Jhonsa, a story I have no problem pointing you toward. Jhonsa points out how many stocks including this one had been priced as if they had businesses operating without significant competition, whereas in the case of Fastly, the competition is fierce. Not only does Fastly face more direct competition from the likes of Cloudflare (NET) , and Akamai (AKAM) , but indirectly from primary cloud providing giants like Amazon (AMZN) and the already mentioned Microsoft that can sell edge computing services complimentary to the core business. 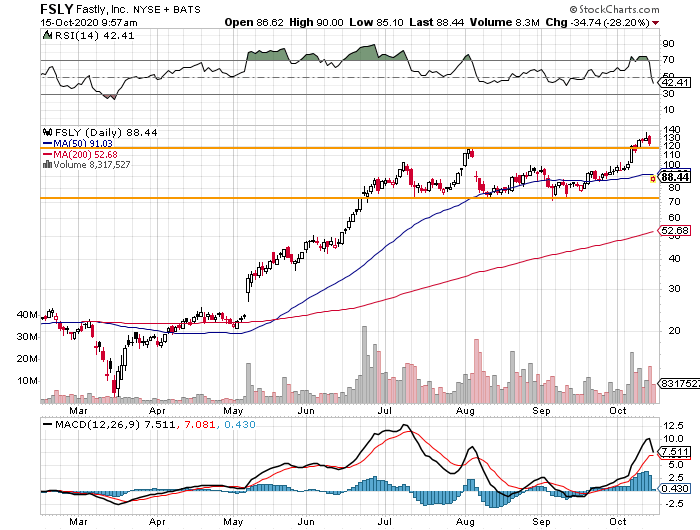 Incredibly, these shares seem to be trying to hold the 50 day SMA. Should this spot, already under pressure, not be regained, then the lower bound of the basing pattern in place since late June becomes a target. We're talking $72 here folks, so no, I do not think it is time to step in and be brave unless speculation is one's game. That said, a trader can still get paid about $1.25 for an October 30th $70 put. Expires two days after earnings. Just an idea. I may try something along those lines once this article hits publication.

(Microsoft and Amazon are holdings in Jim Cramer's Action Alerts PLUS member club. Want to be alerted before Jim Cramer buys or sells these stocks? Learn more now.)

Get an email alert each time I write an article for Real Money. Click the "+Follow" next to my byline to this article.
TAGS: Investing | Markets | Stocks | Technical Analysis | Trading | Software & Services