By BRUCE KAMICH Aug 30, 2019 | 02:15 PM EDT
Stocks quotes in this article: AIG, RE
After writing about American International Group ( AIG) earlier today, I thought about looking at the charts of Everest Re Group, Ltd. ( RE) , and I found a similar weak pattern on their charts.
In this daily bar chart of RE, below, we can see that prices have rolled over since early May. Prices were bouncing off of a "neckline" around $242 but that tentative support has given way and RE is testing the rising 200-day moving average line. This month prices have been failing at the underside of the declining 50-day moving average line.
The On-Balance-Volume (OBV) line made its high in May and its subsequent decline the past four months tells me that sellers have been more aggressive.
The trend-following Moving Average Convergence Divergence (MACD) oscillator has declined below the zero line for an outright sell signal.

We can see more sell signals on this weekly bar chart of RE, below. Prices are close to a test of the rising 40-week moving average.
The weekly OBV line is pointed down and the MACD oscillator on this longer time frame has crossed to a take profits sell signal.

In this Point and Figure chart of RE, below, we can see a possible downside price target of $217 being projected. 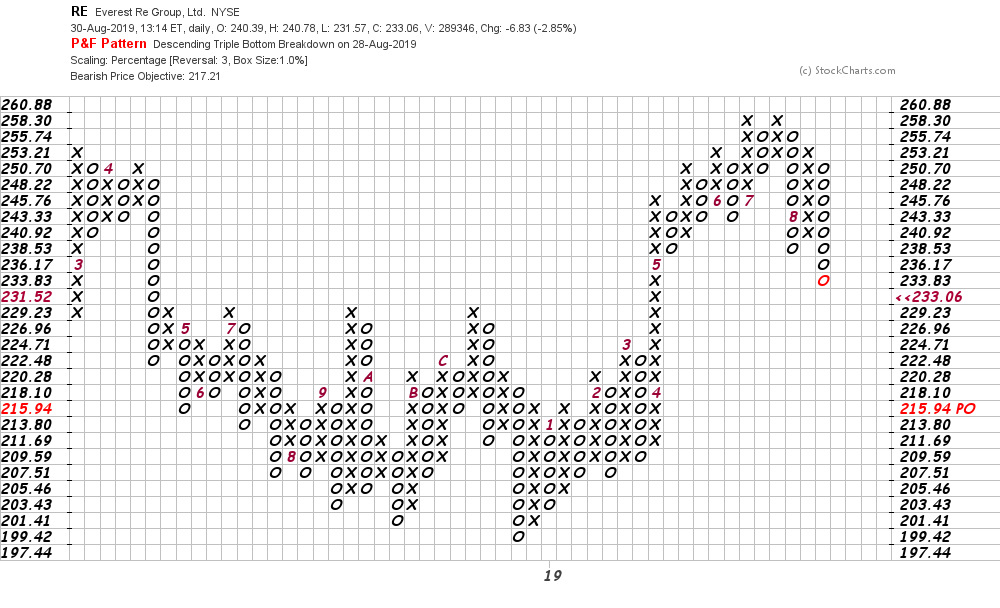 Bottom line strategy: RE is on the defensive now. Stand aside.
Get an email alert each time I write an article for Real Money. Click the "+Follow" next to my byline to this article.
TAGS: Investing | Stocks | Technical Analysis | Trading | Financial Services