On Sunday, one of the grand sporting events of the year will take place: the Super Bowl (LVI).

Back in January 2000, I created a brand new stock market Super Bowl indicator as a contrary indicator, very similar to the cover of Time magazine.

My indicator dictates that the more intense the Super Bowl TV advertising by a group of companies, particularly in a specific industry, the more likely the stocks of those companies will perform poorly in the year ahead. Conversely, a reduction in an industry's Super Bowl commercials augurs well for the stocks in that sector.

Last year my Super Bowl Indicator said to short beer and food stocks -- as well as Robinhood (HOOD) -- and to buy auto stocks which were under-represented for the first time in years. Beer and food were 2021 market laggards and Robinhood's shares peaked at $83, and were recently at $14.

My Indicator says to sell Bitcoin and anything related to cryptocurrencies! 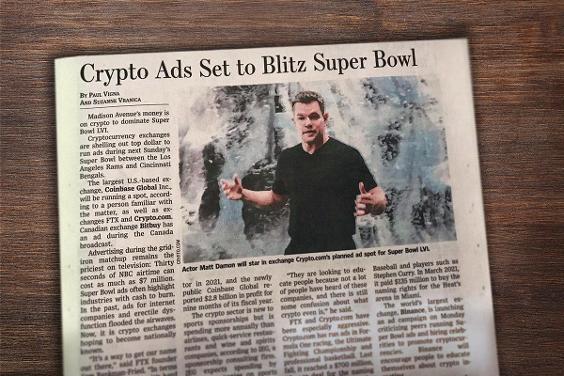 My great pal, Barron's' Alan Abelson (RIP), was kind enough to include and highlight my newly minted indicator in his "Up and Down Wall Street" column during the weekend of the 2000 Super Bowl -- and writing this makes me so nostalgic regarding my weekly conversations with him.

As it happens, back then, My Stock Market Super Bowl Indicator gave a clear warning alarm to the end of the Dot.com bubble.

As the late Alan Abelson wrote at the time:

"As it happens, last week's tech wreck was accurately forecast by a remarkable new stock-market indicator, one we're proud to print for the first time anywhere, the Stock Market Super Bowl Indicator.

Before you start yapping about it being old hat -- or old helmet -- we respectfully suggest you cool it. Pure and simple, our new indicator has nothing to do with the old Super Bowl indicator. Unlike the latter, its predictive power doesn't depend on the outcome of the Super Bowl or, more specifically, whether the winner represents the National Football League's American Conference or the National Conference.

Our brand-new Stock Market Super Bowl Indicator is a contrary indicator, kind of like the cover of Time. Its critical components are the commercials carried on television coverage of the event and the identity of the companies doing the advertising. Its virtue is not as a forecaster for the market as a whole, but for individual sectors of the market.

Simply put, the more intense the Super Bowl TV advertising by a group of companies, the more likely the stocks of those companies -- and others of a kindred ilk -- will do poorly in the year ahead. For 2000, we're sorry to report, the indicator is flashing red for the Internet crew.

By Doug's count, roughly 12 of the 30 companies shelling out an average of $2 million for 30-second spots are dot.coms. That's four times the number of 'Net outfits that made their pitch on Super Bowl TV last year and compares with only one in each of the prior two years.

What's more, for the first time, an Internet company, E*Trade, is sponsoring the half-time show. That's known in locker-room lingo as piling on.

If nothing else, the greater the number of look-alike or sound-alike companies doing the shilling, the less the impact of the individual shills. And in fact, there seems to be more than a modicum of evidence that for the viewer, the link between the commercial and the sponsoring Web company barely registers.

Making the auguries all the darker for those dozen dotcoms is the sad history of the sole 'Net TV advertiser during Super Bowls XXXI and XXXII, autobytel.com. A '99 IPO, the stock peaked at $48 and, last we looked, was a hair under 17.

Without Wall Street, Silicon Valley would not have been able to remove the burden of salaries from its operating statements and substitute stock options for cash compensation. Without the lovely boost to earnings afforded by the incredible lightness of labor costs, earnings growth would be considerably less, and so the multiples awarded that growth would be merely ridiculous instead of absurd. There would be only a quarter as many West Coast billionaires and half as many millionaires.

In like manner, since the vast bulk of Internet companies are bereft of even a hint of cash flow, Wall Street has, via stock offerings, endowed them with the means of promoting their wares, not only on TV during the Super Bowl breaks but also in newspapers and magazines, on billboards and in subway cars and every other space known to advertising man.

If, indeed, we are rapidly reaching the point of cognitive congestion where the consumer is under such assault from so many dot.coms that they have begun to merge in his psyche into one big indivisible glob, that spells trouble in capital letters. And not only for the 'Net companies, but also for the media on which that vast flow of lucre has been lavished."

Of course, the rest was history, as one of the largest stock market declines, especially of a technology and Internet kind, occurred during the subsequent few years.

For 30 Seconds of Your Time

Much like literally everything else, Super Blow LV advertising was affected by the coronavirus -- with huge names like Coca-Cola  (KO) and PepsiCo  (PEP) sitting this one out, although Pepsi sponsored The Half Time Show.

In total, there will be about 38 advertisers this year, some with multiple product ads, consisting of only three auto companies, 12 food, eight beer companies, four technology companies, four in financial services, nine consumer product companies -- and of course... drum roll... Robinhood!

For the tenth time, Pepsi was the sponsor for the half time Super Bowl ceremonies last year, as it is this year again.

I concluded in 2021 that the proliferation of beer and food companies compared to previous years could produce pressure those sectors over the balance of 2021. On the other hand, auto stocks were underrepresented vis a vis prior Super Bowls. They proved to be great buys.

There are roughly 40 companies that have purchased commercial time to advertise in this year's Super Bowl.

There are all the familiar names that seem to repeat annually -- Budweiser and Michelob (BUD) , automobile companies ( (GM) , KIA, Carvana (CVNA) , BMW, Nissan (NSANF) ), the Avocados from Mexico, Hellman's and Pringles, Booking.com and Expedia (EXPE) and so on - nothing new on the horizon, except...

There are two conspicuous and new entrants that are forking up the big bucks -- both in the cryptocurrency field:

Cryptocurrency is here to stay. With Crypto.com buying naming rights to the Staples Center and NBA star Kevin Durant partnering with Coinbase, the new technology and sporting world have formed a fast and friendly relationship. Cryptocurrency exchange FTX is getting in on the action, purchasing a Super Bowl Ad for LVI, but it has not released any creative details yet. Valued at $25 billion, FTX recently purchased the naming rights to an arena in Miami for $135 million. The company has also recently named stars Tom Brady, Gisele Bündchen, Stephen Curry and Shohei Ohtani brand ambassadors.

Cryptocurrency and sports have continued to develop a relationship and that burgeoning partnership is reaching a fever pitch. Cryptocurrency exchange Crypto.com has announced that it will be running its first Super Bowl ad according to The Wall Street Journal. It's another notch on the brand's belt as it recently paid a reported $700 million for the naming rights to the Staples Center Arena in Los Angeles. Crypto.com also became a sponsor for the 2021 Coppa Italia Final earlier this year. Actor Matt Damon appeared in a spot for the brand in late October.

(This commentary originally appeared on Real Money Pro on February 11. Click here to learn about this dynamic market information service for active traders and to receive Doug Kass's Daily Diary and columns from Paul Price, Bret Jensen and others.)

Get an email alert each time I write an article for Real Money. Click the "+Follow" next to my byline to this article.
TAGS: Bitcoin | Investing | Markets | Stocks | Trading | Sports business | Advertising | Cryptocurrency | Sports | eSports