The news that The Gap (GPS) had just put to the tape the firm's fourth quarter results seemed immaterial to me. I know, they not only missed on revenue, but said revenue also printed in outright contraction year over year. Peering over the data, a few items moved in the wrong direction from where they were a year earlier. Nothing to be concerned about, just cash & equivalents, net sales, gross profit, operating income... you know, small stuff. Perhaps the only comparisons that might shed positive light on the firm have been income taxes, and the performance of the Old Navy brand versus the rest of the firm.

How many times I've heard that, I don't know. I do know that this sentence has never, ever ended with a reference to "The Gap", or "Banana Republic". While nearly everyone who follows retail had hoped/expected that the parent firm might spin the Old Navy business off for several years, the firm has finally announced it's intention to do so. If you have ever been in an Old Navy store, especially around "Back to School" season, then you know why. The parent will close more than half of it's Gap-branded stores as no one has fallen into the Gap of late. The parent will also close 230 or so specialty stores. What remains will be run by current GPS CEO Art Peck. That will include Gap Stores, Athletica, Hill City, and the already mentioned Banana Republic. Sonia Syngal who has already been running Old Navy with a modicum of success will continue to do so after the name becomes independent sometime next year.

My first reaction to the news was that I've got to get some of this on my book. I did not act right away, and I likely will not act very soon. By the way, did you see Foot Locker (FL) ? Whao. That's impressive. Taking Nike (NKE) higher with it. Okay, back to this story. The firm expects margins to remain pedestrian throughout full year 2019, and has guided earnings for the year to the low side of what the financial industry was looking for. 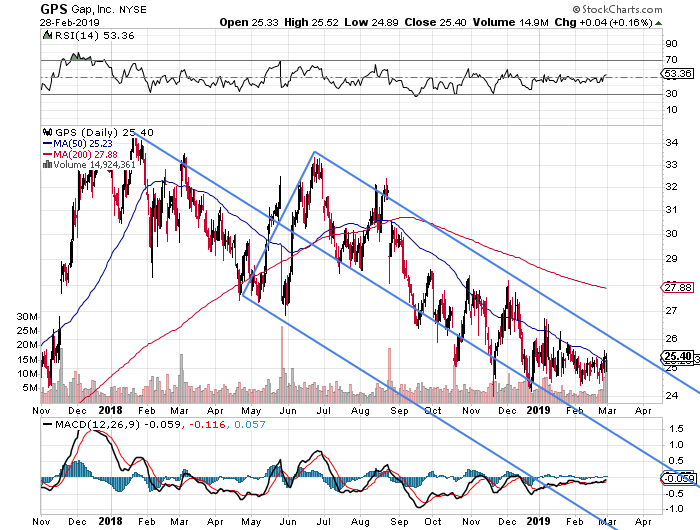 This morning, these shares will break above the upper trend line of the Pitchfork, not to mention the 200 day SMA. Now keep in mind that 11.5% of the float here is held short. The squeeze that this creates will force an artificial premium at the point of sale. While I would not mind owning some equity, or at least some equity of what ends up being Old Navy, if I were long this stock I would likely take a profit on the short cover.

My guess is that these shares will eventually be drawn back to at least that 200 day line. You want to sell a $27 put that expires in January 2020, I think I could condone that. Beware however that the market is illiquid for such an instrument and you may have to dangle your offer out there for a while. I think if you are interested, and I am... that we have time. Don't chase the name. Short sellers, I think should wait until they see how those already short react.

I'd Like to 'Affirm' My Views on Affirm Holdings

The fundamental story here is strong on AFRM.