The earnings calendar is light MOnday but more reports are expected later in the week from Domino's Pizza (DPZ)  , for example, as Jim Cramer details in his Real Money column. DPZ is anticipated to release its numbers before the opening bell Thursday.

We last reviewed the charts of DPZ back on July 17 and wrote that, "Continue to hold longs from previous recommendations. Raise stop protection to a close below $360 now. The $527 area is our new price target."

Let's check on the charts again this morning.

In the updated daily bar chart of DPZ, below, we can see that prices rallied into late August and corrected down to the $375 area before climbing again to new highs. Our suggested stop below $360 was never reached. Traders could raise stops to a close below $390 now. DPZ is trading above the rising 50-day moving average line and well above the rising 200-day moving average line.

The daily On-Balance-Volume (OBV) line moved higher to a new high to confirm and support the price gains. Buyers of DPZ have been more aggressive the past 12 months. The trend-following Moving Average Convergence Divergence (MACD) oscillator has stayed above the zero line for much of the year and is pointed higher now.

In the weekly bar chart of DPZ, below, we can see a bullish long-term picture. Prices are in an uptrend and above the rising 40-week moving average line.
The weekly OBV line has been strong from March and is close to making a new three-year high. The MACD oscillator corrected from May to now but has just turned higher again for a fresh buy signal.

In this daily Point and Figure chart of DPZ, below, we can see the recent breakout to a new high and the $526 price target. 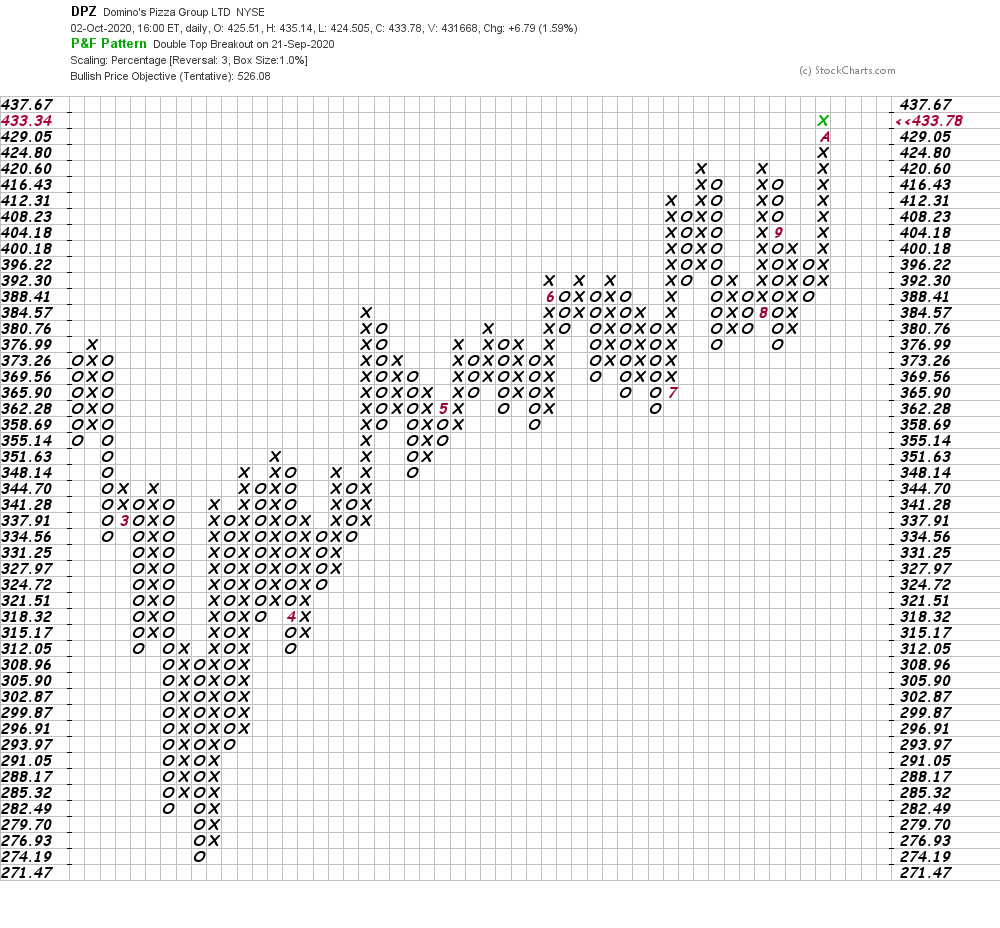 Bottom-line strategy: My job would be easier if all stocks continued to perform like DPZ. Continue to hold previous long recommendations. Raise stop protection to a close below $390. The round number of $500 and $526 are the price targets for now.
Get an email alert each time I write an article for Real Money. Click the "+Follow" next to my byline to this article.
TAGS: Investing | Technical Analysis | Restaurants | Earnings Preview