Dollar Tree (DLTR) put up some pretty nice results on Tuesday morning. The guidance wasn't all that gnarly either, except that is... for a lackluster outlook of profits. The stock was pummeled. Down 12.87% on Tuesday and another 1.46% on Wednesday. Your old pal has initiated a long position on that weakness. This is that tale.

For the three month period ended October 29th, Dollar Tree posted GAAP EPS of $1.20 on revenue of $6.94B. These top and bottom line results both beat Wall Street, while the sales number was good enough for year over year growth of 8.1%. This was an acceleration from 7% growth for the two quarters prior and 5% growth the quarter before that.

Same store sales increased 6.5% across the firm from the year ago comp. Broken out by brand, Dollar Tree locations experienced same store sales growth of 8.6% (8.5% in constant currency), while Family Dollar Stores showed comp growth of 4.1%.

- For the current quarter, the firm expects net sales to range from $7.54B to $7.68B. This put the low end of the range above what was Wall Street consensus of $7.53, based on a mid to high single digit increase in overall same-store sales.

The fact is that "currently" the balance sheet is in good shape. Being old-school, I would be more comfortable with either a larger cash position, reduced debt load, or some combination of the two. Of course, a lot of that will come down to how well the firm manages those inventories.

Since these earnings were released on Tuesday morning, I have found nine sell-side analysts rated at four stars or better at TipRanks that have opined on DLTR. Across those nine, there are six "buy" or buy-equivalent ratings, two "hold" or hold-equivalent ratings and one "underperform" rating, which is considered to be sell-equivalent. The average target price of these nine analysts is $165.33 with a high of $194 (Krisztina Katai of Deutsche Bank) and a low of $109 (Robert Ohmes of Bank of America)

Once omitting the high and low as outliers, the average target price across the other seven rises to $169.28. One highly followed analyst that did not make my cut by virtue of his three-star rating, but may be worth mentioning as some readers probably follow him due to his media presence is Matthew Boss of JP Morgan. Boss maintained his "overweight" (buy-equivalent) rating, while reducing his target price from $176 to $170.

The market has taken its pound of flesh. The quarter was good. Very good at Dollar Tree. Less so at Family Dollar. The guidance is nice as well, except that margin is going to suffer as there is a bloated level of inventories to manage. That said, I feel that as the economy slows throughout the first quarter moving into the second quarter of 2023, and that this is precisely that kind of retailer that will do well, as consumers on a budget seek ways to stretch paychecks.

I initiated this name with a long position earlier this week as I felt the selloff was probably overdone. So far, my average price is $149.45. I have a ways to go to get this position where I want it in 2023, being only about 1/8 of the way into my position building process.

This is part of a three-pronged approach to retail that I am taking for early 2023. I am in Home Depot (HD) as homeowners will not likely be able to trade up for the near future. I am in TJX (TJX) , as that firm is uniquely positioned to benefit from the bloated inventories we see across the retail landscape.. and I am now long DLTR in anticipation of a more financially driven US consumer. 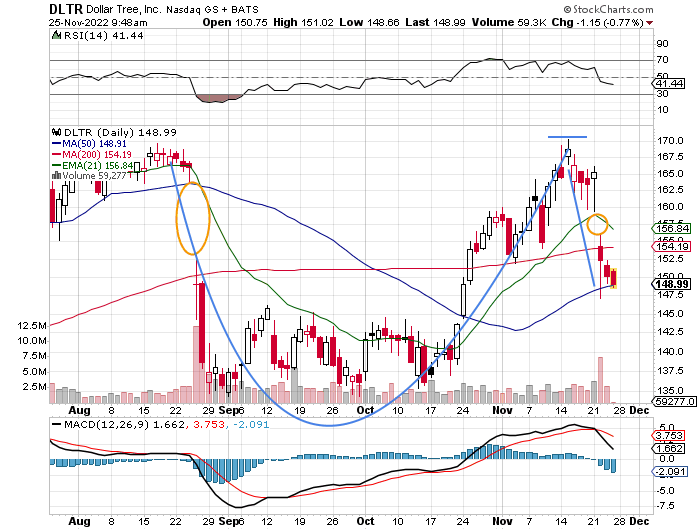 Readers will see that as the stock price took a dive earlier this week, so did its RSI and daily MACD. This created an unfilled gap in between $156 and $159 that will probably have to fill at some point. The shares now struggle with support at their 50 day SMA.