Night falls. No moon. On foot. Gear taped up. Silent. Dark. Red lens? Don't use it. Turn that radio off. Oh, dark... did I mention dark? Hear that? Rattle. Stop moving. Hear it again. Real slow. Back away from the sound. Another rattle. Crap. Stop again. Slowly move between the two rattles. Now what? Rattles seemingly from all directions. Echoes? I don't think so. In think we walked into the wrong neighborhood. Nothing sudden. Single file on me. Don't let Doc be last. Kick sand. Kick rocks. Move forward. Do it again. Then again. Almost there. But, where?

Exactly. Equity markets appeared to barely budge on Monday. Baby steps. Nothing bad? That's the intention. Becomes difficult after six weeks of nothing but up. Narrow ranges. Light volumes. Control from elsewhere, meaning that equities have been controlled by the long end of the Treasury yield curve that itself has been controlled by trade headlines. Oh, that and rapidly declining estimates for fourth quarter GDP. I have seen these estimates change rapidly as a quarter develops in my time, so I'm not about to scream about the sky falling or anything, but right now, ugly is too kind a word.

Now, one has to ask oneself. If spreads expand due to a steepening yield curve resultant of optimism that any kind of trade deal between the U.S. and China will give birth to a renewal of global economic growth, and this sentiment in turn supports large cap equities... then does it stand to reason that should the long end of the curve find support at these levels due to a lack of evident growth in real-time, is that also a positive for equities? Simplified... does the macro matter for equities?

I do not mean this to be non-committal, or evasive... these are the questions that I try to answer for myself. I can be honest with you because I'm not trying to sell you anything, and you are my people. I think the answer rattling (Man, I hate snakes) in my head is that markets were able to rotate from defensive posturing into an increased acceptance of value type investing without dinging indices hard at the headline level. Should growth stall significantly in real-time while leadership drags out potential optimism over trade, could a rotation unwind be carried out without outsized damage at the index level. Follow? 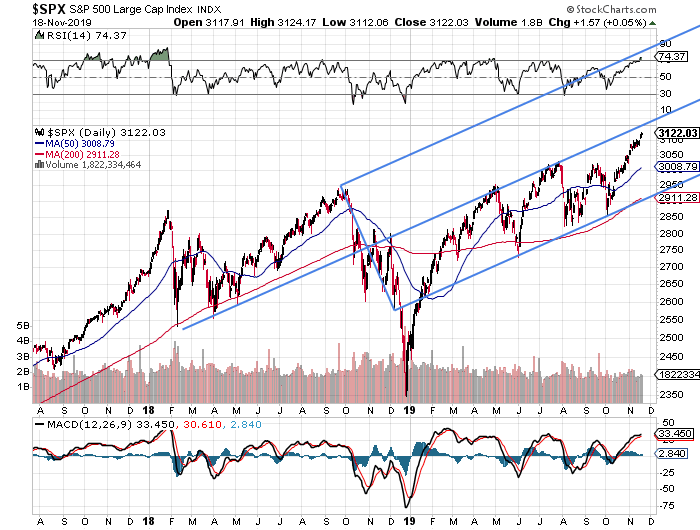 Remember this chart? I showed it to you recently. For the S&P 500, Relative Strength now stands at 74. It was this high in April. The market took off more than a pound of flesh at that time. Relative Strength was greater than this in January 2018. Don't think too many of you would sign up to do that again. I am not saying that stocks can not go higher.

Am I a wise man? Surely, I really don't know. I do see the index approach the central trend line of this Pitchfork. That area has acted as sharp resistance twice already this year... in April and July. The lower trend line of the Pitchfork, a line that has acted as support all year long now runs congruent with the S&P 500's 200 day SMA.

Does the index look comfortable closing 114 points above its own 50 day SMA (overnight futures markets are trading even higher)? No, it does not. That's a 3.8% premium over a short to medium term moving average that has been spiking simultaneously. The daily MACD below this chart looks dangerous, but if we zoom in... 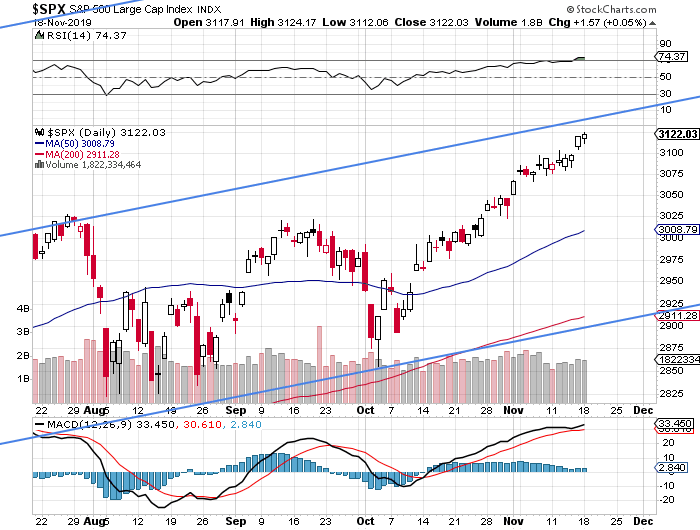 We see that this MACD pulled away from a potentially bearish cross-over since the late Friday rally. How much belief is there in these levels? That's another story all together. Should there be hard news, will the markets sell off? Perhaps, regardless of outcome. Better to keep sending mixed signals.

Somebody's always chasing on the outside. See that lower trading volume at the lower right hand side of the chart. Aggregate trading volume attributable to constituent companies of the S&P 500 have not kissed their own 50 day SMA for volume for seven consecutive sessions. That's quite a few points without a lot of conviction behind it. Attributable trading volume has been somewhat more convincing for the Nasdaq Composite, and even better that that relative to moving averages for the Nasdaq 100. Just what the heck does that mean to a kid from Queens trying to figure it all out for himself?

I think it means this. The 1.6% rally across the Information Technology sector over the past week is worth more than the 2.6% run in Utilities or the 2.4 % move for the REITs over the same time frame. As for Healthcare's 2.5% move, that's been driven by the Providers as Senator Elizabeth Warren has now proposed a transition period to her "Medicare For All" plan that seems less immediate and perhaps less Draconian. How much had been priced out of these names and needs to be priced back in will remain an unknown. Energy? Yeah, as U..S production continues to climb, even as the number of rigs in operation continues to dwindle. That's a problem for oil services in particular. Duck Duck Goose was more fun as a kid.

Today (Tuesday) is the day. Salesforce (CRM)  co-CEOs Marc Benioff and Keith Block will kick off the firm's annual "Dreamforce" user conference in San Francisco this afternoon. The focus for Salesforce shareholders this year will be as much about the firm's ability to digest recent acquisitions, while generating a return to better than lackluster sales growth that produce better margin. That however, will be Wednesday's dog and pony show.

Tuesday's main event will feature a discussion between Benioff and Apple (AAPL) CEO Tim Cook. The two will discuss productivity and learning on the best devices for business. This reminds me that Apple just announced on Monday, an event for the press on December 2nd that will honor favorite apps and games of 2019. While that topic holds my interest for zero seconds, it does allow me to pull up Apple's chart and speak to you. 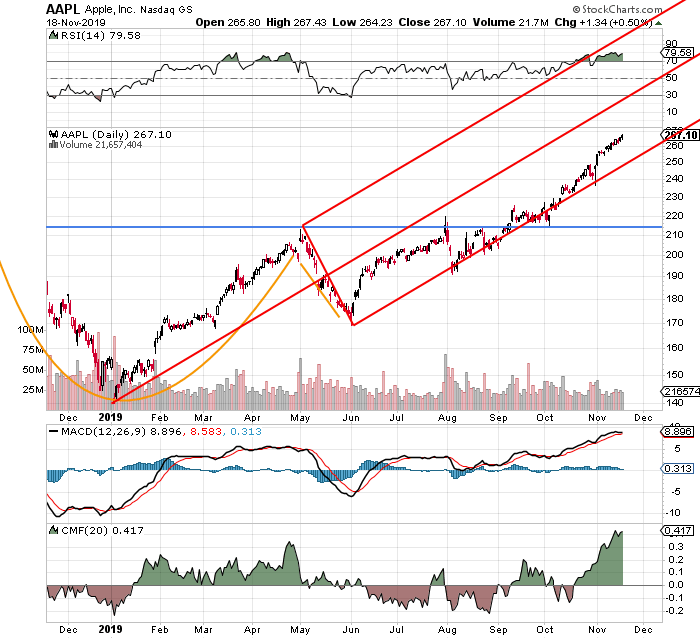 Remember this chart? I showed this one to you back when I raised my price target for AAPL to $258. Now, regular readers will recall that at that time, I allowed for prices as high as $269, which is unusual for me. I typically try to use a standard NATO round when targeting prices for stocks and place a well aimed shot. One shot one kill. I was so unsure here, that I used a mortar round. Well, the shares now trade at the top of even that targeted range.

What I am telling you is that I'll probably sell some Apple today if I can get $269. Trade AAPL instead of just owning it? That's hasn't always worked out in my favor. Then again, it's worked out quite well on occasion. Early 2019 being one time in particular.

Get an email alert each time I write an article for Real Money. Click the "+Follow" next to my byline to this article.
TAGS: Economic Data | Economy | Investing | Markets | Stocks | Technical Analysis | Trading | Software & Services

A Shift in Market Character Doesn't Happen All at Once

We're now in the dog days of summer, and this is typically when we have some of the lowest volume days of the year.

This Is Still One Hot Commodity

Let's look at several energy plays and see which is burning for a trade.