"Breathtakingly Bad". Those words come from Deutsche Bank's post earnings assessment as analyst Amit Mehrotra lowered his target price from $178 to $142, after downgrading the name three months ago. Mehrotra is not a particularly highly rated analyst at TipRanks, but those words, I thought, summed up the quarter reported by FedEx (FDX) perfectly. Other analysts also chimed in, and we will get to that, but first let us dig into the nitty-gritty and take a look for ourselves, shall we?

For the firm's fiscal second quarter, FedEx reported adjusted EPS of $2.51, or roughly 27 cents below what was considered consensus. Revenue for the quarter landed at $17.3 billion, printed -2.8% year over year and also badly missed expectations. The firm cut full year expectations for 2020 in term of EPS to $10.25 to $11.50, down from its own prior view of $11 to $13. Industry consensus had been around $12.05. This is the second time in three months that FedEx has felt compelled to cut this full year outlook. This is the fifth consecutive quarter that the firm in some way reduced forward guidance. The firm blames weak global economic conditions, increased costs associated with FedEx Ground due to expanded services, and the loss of business from a large customer. Amazon (AMZN) ?

I'll tell you what. Take a look at the financial tables provided by the company on Tuesday evening. What jumps off the page? Operating margin of 3.2%. That number compares to operating margin of 6.6% for the same quarter last year... or rather it does not compare. Not very well at least. It may or may not be noteworthy that for the most recent quarter, key competitor United Parcel Service (UPS) was able to boast operating margin of 7.6% for their most recent quarter. Net income? Glad you asked. For this quarter, that line printed at $560 million, compared to $935 million a year ago.

Back to the analyst community. Yes, JP Morgan was positive, but that was ahead of earnings. Since the numbers dropped. I have taken note of at least eight comments made, three of which were by five star analysts. All three either downgraded the name, or reduced target price. The gist seems to be that the firm now needs to show the street, that perhaps patience has started to wane. I would say the most positive among the group was Patrick Brown of Raymond James. Brown reduced target from $175 to $167, but left a Buy rating on the shares.

Now, about the loss of business from that large customer. There is no doubt that the last mile, and ever shrinking allowances for delivery times are pressing the delivery services industry, not to mention e-commerce retailers. This summer FedEx ended the firm's Ground delivery and Express shipping contracts with Amazon as Amazon has rapidly built up its own network for parcel delivery.

On Monday, Amazon blocked third parties from using FedEx's Ground and Home delivery services for Prime shipments, citing a decline in performance at FedEx heading into the holidays. Morgan Stanley had mentioned earlier in December that perhaps Amazon was already delivering about half of its own packages domestically. This overflow of business will not benefit UPS at the expense of FedEx. For now. 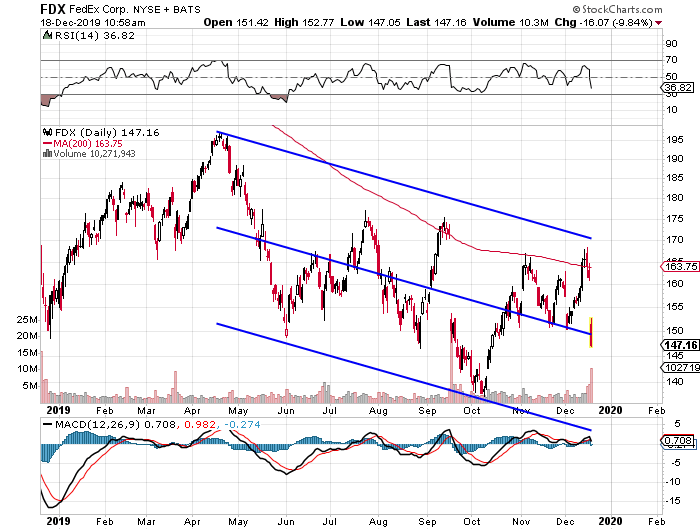 Sadly, for FedEx shareholders, these shares have plummeted on Wednesday, crossing over the central trend line of this Raff Regression model. Why is this significant? After flirting with the possibility of breaking out of this downward sloping trend just days ago, this confirms for those interested that the trend is very much in tact. Instead of being able to use the 200 day SMA as something of a springboard, shareholders must now brace themselves for the possibility of a lower low at some point in early 2020.

In all sincerity, that low is just $10 away at this point. One could put on a bear put spread if they also feel this way, but I think one really has to ask oneself. In this environment, with so many metrics moving the right way, supported by improving macro-economic data, does one really need to be in FDX? A better idea might simply be buying a few shares of UPS on this broad dip in the transports that has been caused by FedEx. At least UPS pays shareholders 3.2% just to hang around. FedEx pays out just 1.6%.

Get an email alert each time I write an article for Real Money. Click the "+Follow" next to my byline to this article.
TAGS: Dividends | Earnings | Investing | Stocks | Technical Analysis | Trading | Transportation | Stock of the Day

You Can Keep Circling H&R Block, but Don't Park Your Money There Yet

The charts of HRB are weakening ahead of Wednesday's earnings.