Comcast (CMCSA) put the firm's fourth quarter performance to the tape early on Thursday morning. The results were solid at the headline level, but as we see so often in this era of transition for the Communications Services industry, performance across individual business lines was mixed, while colored by a hopeful but less certain future.

For the quarter reported, Comcast printed adjusted EPS of $0.79. That beat consensus view by three cents, and shows as growth of 8.8% y/y, but flat when looked at in sequence. Revenue posted at $28.4 billion, +2% y/y, and also beating Wall Street expectations. More important, at least to an investor like myself, would be the 9.5% increase in the annual dividend to $0.92, up from $0.84. This would increase the yield from 1.77% to a forward looking 1.95% based on Thursday's closing price of $47.44.

So, let us pop the hood, and take a look at what's driving this name. One must bear in mind when looking at past performance that going forward, the firm had recently revealed the "Peacock" streaming service that will be launched for domestic consumers this July bearing a free version along with two levels of pricing. This will put Comcast in direct competition for the streaming entertainment viewer with the likes of Netflix (NFLX) , Amazon (AMZN) Prime Video, Apple (AAPL) TV Plus, AT&T's (T) HBO Max, Disney (DIS) Plus, and Hulu (also controlled by Disney).

As a consumer of this type of entertainment, I have found that what keeps me from completely cutting the cable cord has been the lack of live sports, as well as the lack of real news programming. Disney masterfully filled the need for live sports with ESPN Plus, which I think is awesome. Comcast plans to tackle the lack of news programming with a news channel on the Peacock platform that will be a collaboration between NBC News and Sky News that will be known as NBC Sky World News.

Back to the fourth quarter. First, we'll start with the largest. Revenue from Cable Communications grew by 3% to $14.8 billion. Within that unit, High Speed Internet contributed $4.791 billion (+8.8%) in revenue on the addition of 442K broadband customers. This growth was well above industry consensus of just 362K. Conversely, video still contributed $5.507 billion in revenue. However, this number would be contraction of 1.2% from Q4 2018, as this line lost 149K subscribers, more than expected. Down the line, a little, I do think that it may be noteworthy that advertising revenue derived within this unit declined quite badly (-19.1%) to $699 million.

As for the rest of the firm, NBC Universal posted revenue of $9.15 billion, which was below consensus, while Cable Networks and Broadcast Television, posted low single digit (in percentage terms) increases. Filmed Entertainment brought up the rear, -21% at revenue of just $1.6 billion. The firm blamed a rather dismal holiday season at the box office.

The Sky acquisition, executed in 2018 amounted to $5.04 billion in revenue, which is just 0.4% growth from last year. That's probably less growth than the firm expects going forward. Sky Total Customer Relationships ended the quarter at 24 million, meaning that there were 77K adds during the quarter. Operating Expenses related to Sky also increased just 0.4%, hence adjusted EBITDA margin for Sky remained constant at 15.2% from Q3 to Q4. The firm's focus will remain on broadband moving forward, as that's where the growth has been of late, and that's where future margin will come from. Adjusted EBITDA margin for the entire Cable Communications segment printed at 39.8%, up from 38.8% a year ago.

Total Free Cash Flow expanded to $2.484 billion from just $2.063 billion one year ago. This is key, as investors would not be crazy to expect the launch of the streaming service to run at a unit specific loss, at least in the early going. Comcast, like Disney, like Apple, like Amazon, and like AT&T can fund their streaming entertainment offerings through these early days as they drain margin through the cash flow provided by other business lines. The one that can not do this is the industry leader, Netflix. 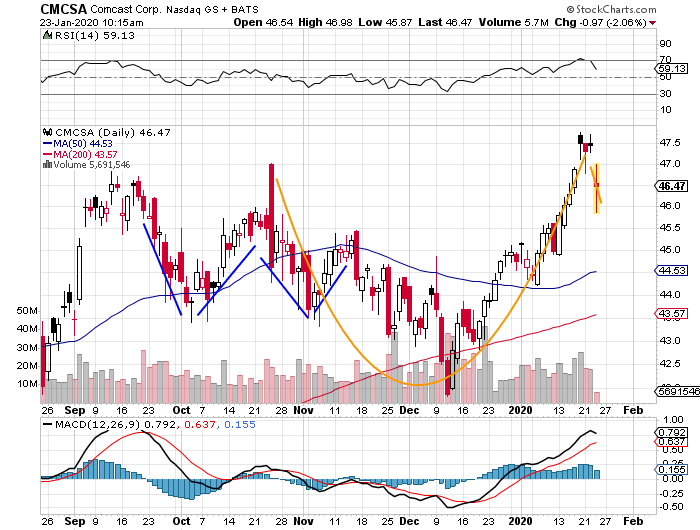 Honestly, I see nothing compelling about this chart. In blue, you'll see a double bottom that failed to produce. Now, in orange, I think I see a cup that amid today's selling has started to form a handle. If that's the case, then Friday's high will become pivot. Don't get me wrong. This is not a bad name, and the quarter reported is not bad by any means, but does it motivate you to risk capital? I don't see that. Not yet anyway. The dividend still does not pay enough to hang around in my opinion.

I would rather watch the potential for this handle to form, and buy the name on momentum above $47.75, than buy it here. Higher price? Yes. Greater probability for success? That's my opinion.

(Comcast, Amazon, Apple and Disney are holdings in Jim Cramer's Action Alerts PLUS member club. Want to be alerted before Jim Cramer buys or sells these stocks? Learn more now.)

Get an email alert each time I write an article for Real Money. Click the "+Follow" next to my byline to this article.
TAGS: Dividends | Earnings | Investing | Stocks | Technical Analysis | Trading | Media | Stock of the Day