Viewers of Mad Money and fans of Jim Cramer love the "Lightning Round" segment of the popular evening financial show. On Monday evening one caller quizzed Cramer about DocuSign (DOCU) : "This is a work-from-home stock that's down big from its highs. This is an ugly market," replied host Cramer.

We looked at DOCU earlier this month on March 9 and we wrote that "If you bought the recent pullback, hold those purchases with a $181 sell stop. I have no special knowledge about Thursday's earnings." Prices bounced after the earnings release but have since weakened again. Hopefully nimble traders sold their positions on the bounce.
How do things look now?
In this updated daily bar chart of DOCU, below, we see that the bears are getting the upper hand. Prices have rolled over the past seven months since the spike high made in early September. DOCU is trading below the declining 50-day moving average line so the math tells us we are in an intermediate-term downtrend. DOCU is also below the 200-day moving average line and rallies earlier this month to the underside of the 200-day line have failed. The $195-$180 area has acted as support many times since August but the area is looking increasingly vulnerable.
The On-Balance-Volume (OBV) line has been weak since January and tells me that sellers of DOCU have been more aggressive. The Moving Average Convergence Divergence (MACD) oscillator has been hugging the zero line since September but clearly moved below the line this month for an outright sell signal.

In this weekly bar chart of DOCU, below, we see a bearish picture. Prices are trading below the cresting 40-week moving average line. Earlier this month rallies to the underside of the 40-week line failed telling me that this indicator is acting as resistance.
The weekly OBV line is showing weakness from February, and the MACD oscillator which has been pointed down since August is approaching the zero line.

In this daily Point and Figure chart of DOCU, below, we can see a potential downside price target in the $132 area. A trade at $187.86 will be a new low for the move down and is likely to precipitate further declines. 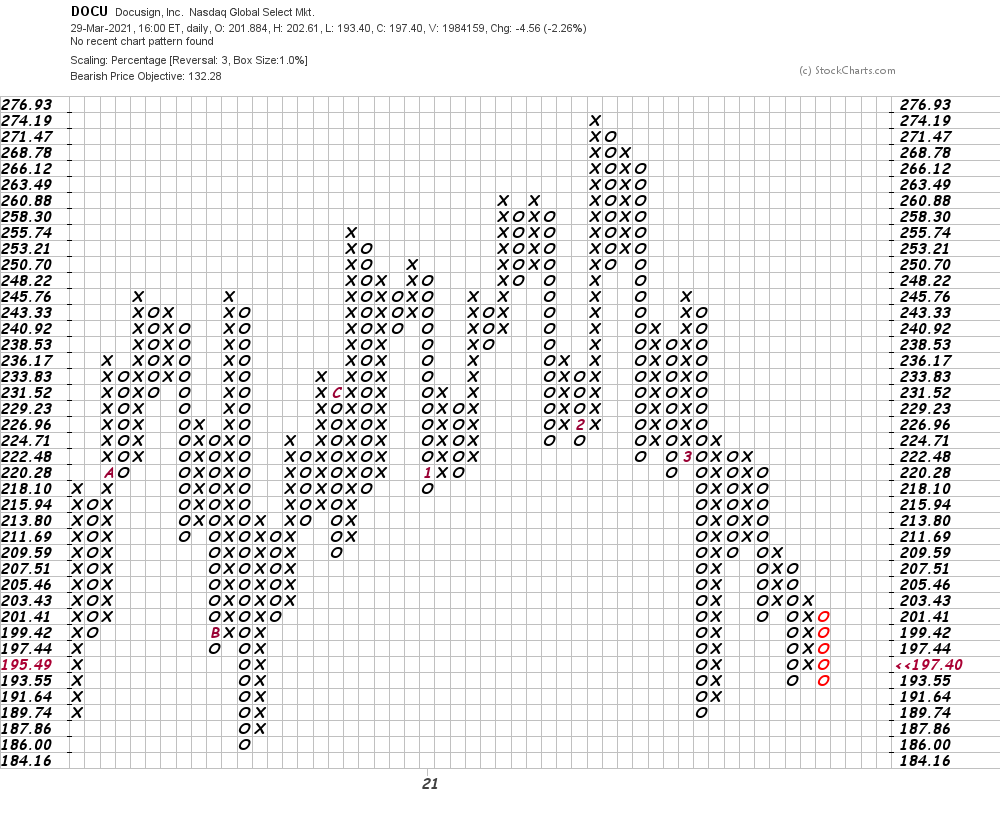 In this weekly Point and Figure chart of DOCU, below, we see a tentative downside target in the $104 area.

Bottom line strategy: The charts and indicators of DOCU suggest that the support in the $195-$180 area is likely to give way and further declines lie ahead. Avoid the long side of DOCU.
Get an email alert each time I write an article for Real Money. Click the "+Follow" next to my byline to this article.
TAGS: Investing | Stocks | Technical Analysis | Trading | Financial Services | Software & Services | Mad Money

This Correction Is More Complicated Than a Covid Variant

The mood is growing grim, and it is a good time to contemplate something I often say during times like these.

The charts and indicators of DNUT do not look so healthy right now, even if the doughnuts look tasty during Hanukkah.