Mixed bag. I have always hated the idiom. I have always hated to use the term in response to questions posed by reporters. I felt it was something of a "cop-out." The fact is that there is no other way to describe Nike's (NKE) fiscal third quarter earnings release made public on Thursday night. Nike reported EPS of $0.90, which did easily beat expectations, but on revenue of "only" $10.36 billion. That top line number fell well short of expectations and was only good for year over year growth of 2.6%.

The numbers within the numbers are also inconsistent, or should I say consistent with a firm wrestling with the impacts of a negatively impacted pandemic economy. Gross margin improved a crisp 130 basis points to 45.6%, but not really for reasons that a firm like Nike would welcome. Selling and administrative expenses dropped, as did "Demand Creation". Why? Less advertising, less marketing, less branding "events." Operating expenses also decreased... less wages, increased management expense management. These moves were necessary. Sales were hampered by both retail closures as well as problems in logistics. We move on.

Breaking sales down regionally, North America contributed $3.564 billion to the pie. This was an 11% year over year decrease, that broken down further... shows -9% performance for footwear, -12% for apparel, and -22% for equipment. The Europe, Middle East, and Africa region produced sales of $2.609 billion, -9%, while the Asia, Pacific and Latin America region printed -8% at $1.315 billion. The firm finds cause for these declines in sales in store closures across almost all regions at times, as well as U.S. port congestion, a shortage of U.S. truck drivers, and a global container shortage.

There were bright spots. For one, the Greater China region produced sales growth of $2.279 billion, up 42%, with the growth fairly evenly spread between footwear, apparel, and equipment. Nike's direct to consumer business grew 20% to $4 billion, including Nike branded e-commerce sales that alone grew 59%. Online sales in North America topped $1 billion for the first time. According to the firm, e-commerce is still on track to eventually account for half of all sales at some point going forward.

The firm is forecasting FY 2021 revenue that will rise in the low to mid teens (in percentage terms) from the year prior. Wall Street had been up around 16%, on this, so that's not really a positive. For the current quarter (Q4), the firm sees sales rising 75% (above the street's 64%) and gross margin expansion of up to 75 basis points. That is a positive. The problem with the outlook in my opinion is that it is at least partially based on eased lockdowns across Europe into April and we all know that much of France just went back into a strict social and economic lockdown this morning. That, and the potential that this response to spiking transmissions of the virus will slow, or reverse Europe's reopening would be problematic.

Just an FYI... The Oregonian (local newspaper) reported on Thursday night that Nike had recently been laying off an unspecified number of employees in addition to the 700 jobs in Oregon that we knew had been lost through January. 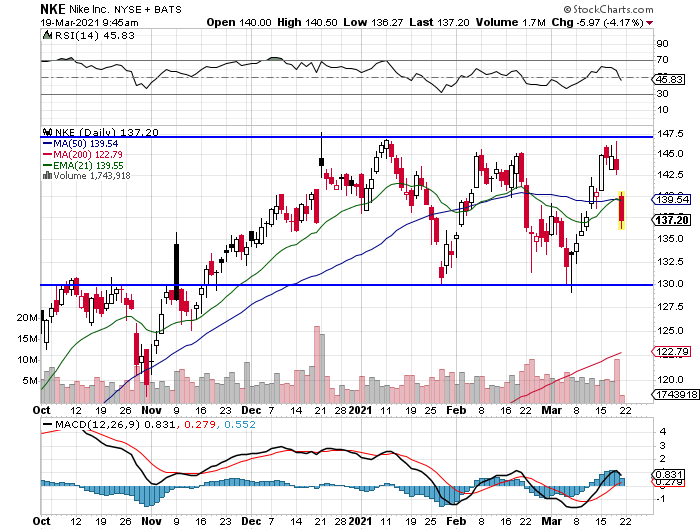 Shares of NKE have been range-bound as a basing pattern had started to develop back in November. The shares have broken through both the 21 day EMA and the 50 day SMA this morning and this has created a gap that will most likely fill at some point. Do you want to buy Nike? Probably. Do you want to pay these prices? Right now? On a Quadruple Witching expiration Friday? Probably not.

The idea in my head is to acquire a few shares as close to the $130 level as possible and get rid of them when that gap fills. Being I think I am willing to pay $130, but I do not want any equity on my book right now, I might as well get paid to wait, right? Just an idea... May 21st NKE $130 puts are worth a rough $3.70 right now. Even if a trader were to have the shares put to him or her in May, the trader's net basis would be $126.30. Not too bad for a stock currently trading around $137, which is more than a 5% discount to Thursday's close.

Get an email alert each time I write an article for Real Money. Click the "+Follow" next to my byline to this article.
TAGS: Earnings | Investing | Stocks | Technical Analysis | Trading | Apparel | Sports business