Can Micron Save The World?

So widely held by the retail crowd. Incredibly low valuations often pointed to as a catalyst. A catalyst to the upside for the shares? Or maybe a catalyst to the downside for projected earnings. Those of us who have often played this game, including yours truly, have often come away shaking their collective heads. I sat this earnings season out, and I'll tell you why. I simply do not trade this stock very well. It is when I have been sure that I had a winner in Micron (MU) that I lost, and even more amazingly, it is when I have decided to exit long positions in this name that simply by dragging my feet through the discipline of incremental trading that I have realized the most profit. Simply put, discipline has often trumped analysis where as MU is concerned, at least for this trader.

So it was that the semiconductor industry suffered first, the collapse of demand for crypto-currencies as a driver, and then from the group's overall exposure to China in terms of revenue generation as the trade war worsened between the planet's two largest economies against a backdrop of slowing global economic health. Inventories became a problem, as much for purveyors of memory chips such as NAND and DRAM, which happens to be Micron's wheelhouse. Micron, by the way had prior to this year been not just exposed to China, but reliant upon the blacklisted telecom giant Huawei for an incredible 13% of the firm's revenue over the two quarters prior to the fiscal Q3 numbers reported last (Tuesday) evening.

The Quarter At Hand

For the firm's Q3, Micron reported EPS of $1.05 on revenue of $4.79 billion. Though these numbers look horrendous on the surface (EPS -67% y/y, Rev -38.6% y/y), the firm actually beat expectations quite handily on both lines. Micron shares roared overnight in response to these numbers. This morning Needham upgraded Micron from a Neutral to a Buy, while initiating a target price of $50. Piper Jaffray, on the other hand, reduced that firm's target price from $40 to $36, while maintaining a Neutral rating. My thoughts? More in line with Pipers, and I will explain. However, I will also acknowledge that these shares are going to trade on G-20 headlines for the time being. While Micron led the way higher on Wednesday morning, the entire group traded considerably higher, especially fellow memory chip makers Western Digital (WDC) , and Seagate Technology (STX) on positive comments made earlier in the day by Treasury Secretary Steven Mnuchin on negotiations with China.

On the call, CEO Sanjay Mehotra is "seeing early signs of demand improvement." The firm expects to reduce cap-ex for fiscal 2020 in order to help improve the balance between supply and demand. For this current quarter, Micron is guiding EPS toward an adjusted $0.45. That's versus a consensus view of $0.61. The firm is guiding revenue for the current quarter toward $4.5 billion. Consensus is at least right now, slightly above that, at $4.56 billion.

Do these numbers scream "Buy" at you? They don't for me. While Sanjay Mehotra is optimistic, he has been optimistic before, and that has not always been reason for shareholders to be optimistic.

I'm going to pretend that I am from Missouri with this one. Show me, not for a quarter, but for a half, at least. Let's not forget that the street is still broadly anticipating full year 2020 earnings "growth" of -42%, without an improved condition regarding exposure to China in general, and Huawei more specifically. 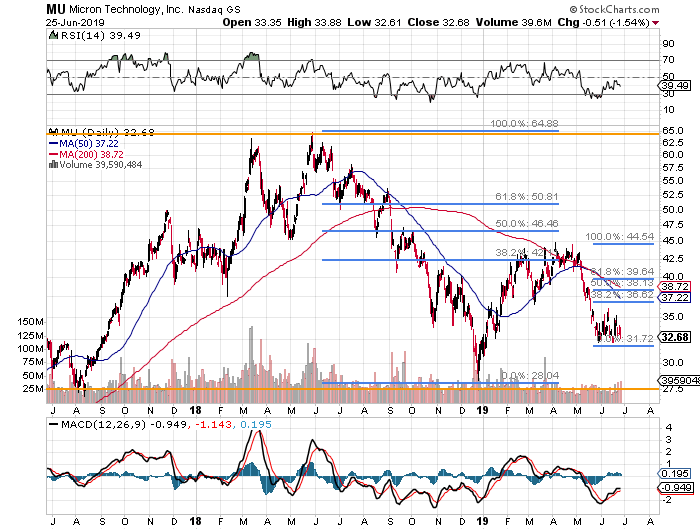 As one can see, the $36 level becomes key this morning. Should this area provide support, there is plenty of traffic in the $38 to $40 range to keep a lid on the shares in my opinion. Should the stock price fail at this spot, return ticket to the $32-ish area would not surprise. I must stress that so much of this, at least in the short-term, will change as rapidly as headlines that leak out of Osaka.

My opinion is this. As an investor, I am unconvinced, so I sit on my hands. As a trader, if maybe I can get long $36 puts expiring in September and short $32 puts expiring the same month for less than a net debit of $1.25... Maybe I go that route. That would be reward worthy of some limited risk.

Get an email alert each time I write an article for Real Money. Click the "+Follow" next to my byline to this article.
TAGS: Investing | Markets | Stocks | Technical Analysis | Trading | Semiconductors & Semiconductor Equipment | Technology | China | Stock of the Day