It's about trust. Sure, as a trader I have made some dough getting in and out of ServiceNow (NOW) . Would have done better just hanging on. The firm reports it's Q2 financial performance this Wednesday afternoon. I am, given the landscape, and given the exhibited willingness of some portfolio managers to seemingly scalp their largest winners this season, tempted to either take a pass on NOW this season, or take a bearish stance going in.

There are a number of reasons why this is a difficult name in which to position oneself this week. One is that I think the firm probably had one of, if not the finest, quarter in the firm' s history. That's saying something, given the firm's place as a leading software/cloud names that simply makes it easier for business to proceed with... well, business. ServiceNow is thriving in this difficult environment, and I think extremely highly of current CEO Bill McDermott of SAP (SAP) fame, who took the reins in November.

That said, and I don't like to look at valuation in stocks of this type as they do seem to trade more on momentum, levered cash flow and potential, than on current fundamentals. But ServiceNow does trade at 124 times past 12 months earnings as well as 100 times 12 months forward looking earnings. Just a few months ago that number was in the 60's. What I am saying is they have to crush the numbers (they just might) and guide forward aggressively (they just might). So, do I trust that ServiceNow probably knocked the cover off of the ball? Yes. Do I trust that the shares will go still higher, even on good news? I don't know.

For the firm's second quarter, ServiceNow is expected to report EPS of $1.0, which would be good for year over year earnings growth of 42%. Though fantastic, that number would actually be slightly down sequentially. As for sales, the street is looking for $1.05 billion. The revenue number is spot on, would amount to growth of 28%, which believe it or not would be the slowest pace of such growth in recent memory.

The story may not be in business to business for ServiceNow, but could be contract work for both the federal and regional governments in response to the public health emergency. We know that the state of Washington and the cities of Los Angeles and San Francisco in California are clients.

We'll also need to hear more on how much current business deals with Deloitte and Accenture (ACN) are playing out, and just how accretive to performance they are. McDermott will also likely have to comment on the still to be completed acquisition of Belgian start-up Sweagle. 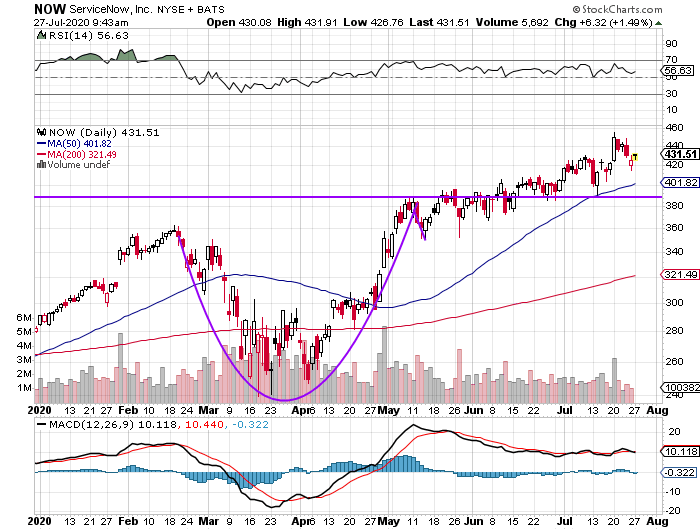 Based on the methodical move higher for these shares since the mid-May set-up that really can not be termed a "break-out", there is some chance that shares of NOW could be pulled back toward the shares; own 50 day SMA (currently $401), and not toward a hypothetical price target of $465. The shares did come sort of close, trading above $454 one week ago.

My thinking is that I would probably like to go into this Wednesday evening bearish, but in no way am I brave enough to short the equity. I think, though a bear put spread might be on the expensive side for a name like this, it is probably the way to go bearish, while maintaining a tolerable level of exposure to risk.

Get an email alert each time I write an article for Real Money. Click the "+Follow" next to my byline to this article.
TAGS: Earnings | Investing | Options | Stocks | Technical Analysis | Trading | Technology