It is, after all, a smaller world. The Walt Disney Company (DIS) . The undisputed king of content, especially after integrating the assets purchased way back before the world ended, from Fox. Thank goodness for that. Walt Disney is the poster child for what some might call the "economic recovery" trade, or the "normalization" trade. What a great group of business units. Really. Unless there is a global pandemic. As long as the sale of entertainment and leisure can be made to large masses of human beings and done so safely.

This is unfortunate. Disney is most famous perhaps for the theme parks, and resort hotels. These businesses have all either been shut down for lengthy periods of time, or forced to operate at reduced capacities. How about the cruise lines? That, my friends will be a "no-go" at this station. Remember how strong Disney's Studio Entertainment division had been? Star Wars? Marvel? Pixar? You name it. The cinema as a viable business had been slowing down ahead of the pandemic as more and more folks chose to stream their entertainment at home. Disney had seemed immune to it all. The firm's movies still did well. Still drove revenue. Until local movie theaters had to shut down. That was the end of that. At least for now, but definitely for longer than anyone anticipated.

By the way, those streaming services had been peeling eyeballs, not to mention advertising dollars away from Disney's very successful lineup of broadcast and cable networks (including ESPN) for years now. This forced Disney to compete in that arena, which to their credit, they have done very well. Speaking of cable, problematically, as ESPN has been a very profitable business all by itself historically, sports had been shut down or reduced themselves. In addition, the public has shown far less interest in some sports when they did finally come back than had been shown prior.

Late Tuesday, the Walt Disney Company reported the necessity to lay off approximately 28,000 employees, from the Parks, Experiences, and Entertainment unit, about two thirds of these will come from the ranks of part-timers. Disney parks boss Josh D'Amaro explained that the firm had done just about all it could before going this route. D'Amaro talked about reduced expenses, delayed capital projects, having already furloughed employees while still paying for their benefits. The business in its current state just can not support such staffing.

The short of it all is this. Most of Disney's businesses rely upon the sale of massed entertainment. This environment is worse than sub-optimal for such businesses. The one business that is actually built to succeed in "this world" is the one that Disney had been prepared to take losses on for a few years in order to build out market share... the streaming business. Direct to the consumer is where "it" is these days, whether you sell sneakers or entertainment. By all accounts, Disney+, ESPN+, and Hulu (Disney owns 60%) have all exceeded expectations since their inceptions or reconfigurations. That does not really cut the mustard though. Let me explain.

Disney released the live action version of "Mulan" as a "pay per view" extra on Disney+. Globally, the film has generated almost $300 million since opening almost a month ago. While this is seen as a huge success, the fact is that this number is probably only about two-thirds of the way toward what the movie might have generated had it been released in movie theaters pre-pandemic. 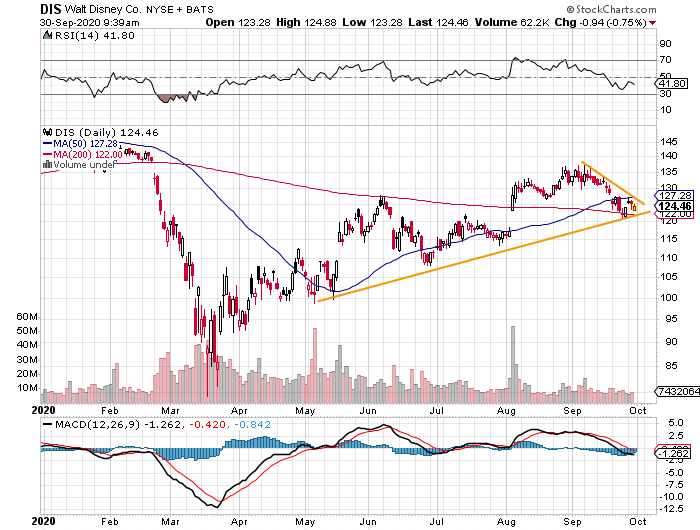 The chart comes to a point now. A series of higher lows that has been in place since March and on trend since early May now runs into a sudden downward sloping series of highs that really only just began about a month ago. There is not much relative strength to point to, and really not a lot of positivity on this chart other than a "golden cross" in early September that appears to have passed without any positive impact.

I would expect a test at the 200 day SMA at the $122 level sometime in the short term. The 50 day is not really that far away at $127. Could the shares get stuck in a range here? It's possible, but the closing orange trend lines suggest that a volatile move might be imminent. The shares are certainly expensive in this environment. An investment in this name is a bet on a recovering economy in a post-pandemic world. I am thinking that I buy the name only on a dip that tests $122 from above, or on momentum on a break above $127. Not in between the two. Just my opinion.

Get an email alert each time I write an article for Real Money. Click the "+Follow" next to my byline to this article.
TAGS: Investing | Stocks | Technical Analysis | Trading | Movie Production | Movies | Resorts and Hotels | Sports business | Television Production/Distribution