Disney certainly left it all out on the field in 2019. The question becomes: how much is left for 2020? The movie lineup will remain strong, but will it be epic in a way that can match 2019? On the surface, I would say no. The culmination of the initial MCU burst came to a resounding close while "Star Wars" ended its third act with strong, yet declining, numbers. Although "Star Wars" will continue the trend of raking in strong numbers, I haven't seen things this divided since Jar Jar Binks was nominated for Time's Person of the Year. I worry the finale wasn't strong enough to drive traffic to the new "Star Wars'" themed sections in the Disney amusement parks. People will still come, but I wouldn't conclude outperformance is guaranteed.

Disney+ streaming does offer a great deal of optimism for 2020, but with The Mandalorian done with its eight episode run in season one and viewers needing to wait until fall 2020 for season two, a lack of new content will be an issue for the streaming service. The lineup in the first half of 2020 isn't likely to draw the same excitement as its 2019 kickoff. Look for growth numbers to diminish in the first and second quarters as some potential subscribers wait for more original content to come online. Unfortunately, that content creation will have a near term impact on the bottom line but should offer long-term rewards. 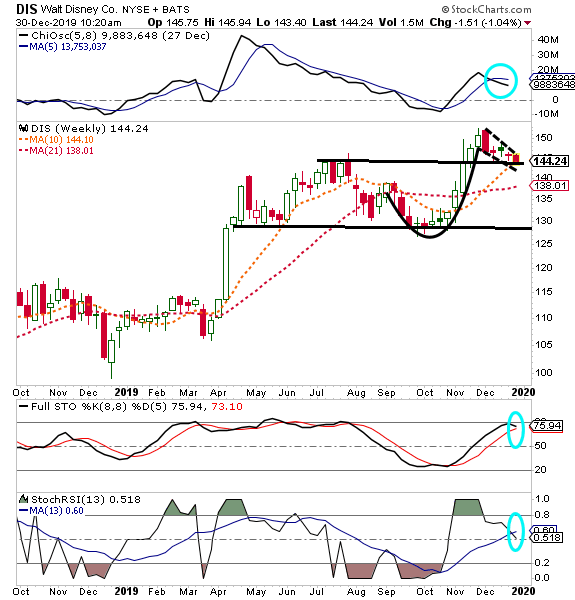 As we head into 2020, the technical picture is best described as something's gotta give. Disney's weekly price action is in its Endgame. That doesn't mean it is bearish, but I foresee one side taking control in the first half of 2020 by what transpires in the first half of January. On one side, we have a strong bullish pattern in the form of a cup and handle formation. This continuation pattern is the culmination of the 2019, however, there is an issue here. The pattern, a continuation pattern, has formed after a channel pattern. Strength is diminished as one could easily argue it is no longer the continuation of a bullish move, but more of a neutral move. Even still, the channel would be a bullish flag after the strong April push higher, so tomato to-mah-toe.

Secondary indicators are polarizing here as they threaten the bulls' arguments in a big way. We already see bearish crossovers in the StochRSI and Chaikan Oscillator while the Full Stochastics has turned lower but not yet crossed. Crosses in that indicator have caused drawdowns lasting some two to four weeks, outside of the one instance where the turn occurred shortly before earnings.

Overall, I think Disney will lack the market outperformance seen in 2019 in the coming year. I envision underperformance in the first half of the year with some optimism building over the summer leading to a stronger second half. I'd get interested again about 8% to 10% lower than current prices although a break above 2019 highs would likely get me interested in a momentum trade, but nothing more than a quick trade.

Get an email alert each time I write an article for Real Money. Click the "+Follow" next to my byline to this article.
TAGS: Investing | Stocks | Technical Analysis | Trading | Media | Movies | Consumer Discretionary | Stock of the Day