I get the story two ways. I read what others are writing about the quarter that the Walt Disney Company (DIS) reported on Thursday evening, and I look at the numbers for myself and read what was said last night by management. Not exactly two different stories, but not exactly the same impression either. Disney had a good quarter. That's my take. I bought some last night after hours. I expect that I will buy some more either today after this piece publishes or over the coming few days. I can see investors balking at the valuation. That's a valid argument. To think that this company is not executing well, or underperformed? That's just not understanding the business, the conditions under which that business has evolved, or how much the average consumer, especially with children... yearns for what Disney offers.

For the firm's fiscal second quarter the Walt Disney Company posted adjusted EPS of $0.79, and GAAP EPS of $0.50. By both metrics, profitability absolutely crushed Wall Street's expectations. Revenue generation of $15.61 billion, however... disappointed and showed contraction of 13.3% year over year, highlighting income from continuing operations before income taxes that printed up 17% at $1.23 billion , even on that reduced revenue. That's not just solid corporate execution my friends, that's simply called "setting the bar."

So, why is the stock showing weakness on Friday morning if the quarter was so good? That gets complicated, but it's more about missing projections for subscriptions to Disney Plus and the ARPU (average revenue per user) for Disney Plus which is at least partially explainable. Disney reports performance across two business segments these days... "Disney Media and Entertainment" and "Disney Parks, Experiences, and Products." Shall we proceed?

By far, Disney Media and Entertainment at least in the present is the much larger segment, contributing $12.44 billion (+1%) to the $15.61 billion whole. Here's where we find Linear Networks ($6.746 billion, -4%), Direct to Consumer ($3.999 billion, +59%), and Content Sales/Licensing ($1.916 billion, -36%). Linear Networks and Content Sales drive the segments operating income, as Direct to Consumer for all of its growth still operates at a loss, which was/is not unexpected.

Let's go into that particular sub-segment as this is where all of the perceived disappointment is stemming from. Disney Plus subscriptions grew to 103.6 million, which is less than the 109 million that Wall Street was looking for. Given that Netflix (NFLX) also just disappointed, is it possible that the pandemic pulled some demand forward? Of course. Is it possible that growth reverts to something less urgent as folks actually leave their homes? Yes, but that is also good for Disney's other segment. The firm has left untouched prior guidance for 230 million to top 260 million subscribers by the end of fiscal 2024.

There was some further disappointment as Disney Plus ARPU dropped precipitously from $5.63 one year ago to $3.99, -29%. What gives here is Disney's Hotstar in India as part of Disney Plus, and the promotional rates around the launch in time for a major cricket event in that country. Ex-Hotstar, Disney Plus ARPU lands at $5.61, down just two cents from a year ago, and a sequential increase from the fiscal first quarter.

Moving on to the rest of the Disney streaming entertainment universe, the performance is very solid and clearly less complex. Hulu SVOD (subscription video on demand) grew 31% to 37.8 million subscribers, while Hulu Live TV + SVOD grew 15% to 3.8 million subs. ESPN Plus subscriptions increased 75% to 13.8 million. As for ARPU, Hulu SVOD increased just two cents to a very impressive $12.08, Hulu Live TV + SVOD increased 21% to $81.83 driven by a price increase, and ESPN Plus increased 7% to $4.55.

As Disney moves toward getting it's highly successful motion picture industry back into newly reopened theaters across the USA and eventually the rest of the planet, management has made clear that new movies will also continue to premier on Disney Plus as a means toward driving new subscriptions suppressing churn.

Disney Parks, Experiences, and Products contributed just $3.173 billion (-53% y/y) to the whole. As for Parks & Experiences, revenue of $1.735 billion came from the domestic side, -58%, while $262 million in sales were produced internationally, -45%. Consumer Products actually experienced sales growth of 13% to $1.176 billion.

Bear in mind that Disney Cruises remained closed for the entire reporting period, as were Disneyland Resort in Anaheim and Disneyland Paris. All other Disney properties globally operated at reduced capacity. Important to note that management reports attendance trending higher throughout the quarter at Walt Disney World in Orlando, Florida.

You've Got a Friend In Me

Speaking just for me, I see it as okay to start, if one has not already... building a long position in Walt Disney. Remember, if we trade, we trade, if we invest... we do so incrementally. I bought small ahead of the numbers and I bought small at this level last night. I am not close to done. 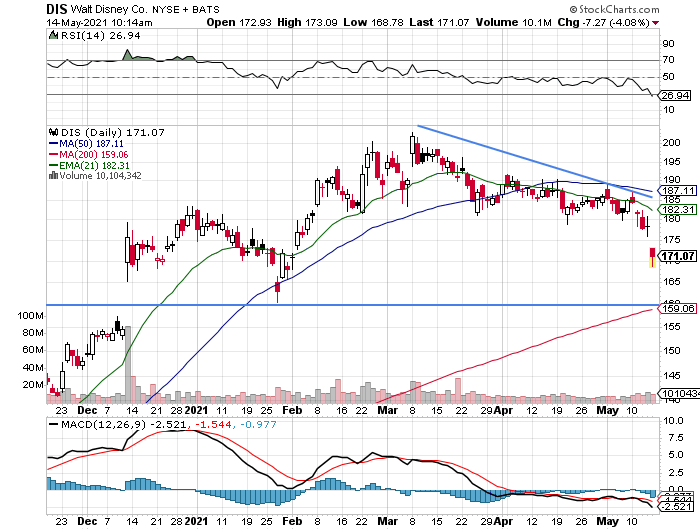 The first thing I see here is the RSI. This stock is short-term oversold. In addition, the daily MACD is atrocious. I also see a tending series of lower highs that led to this morning's gap down opening. As I have told you before gaps do usually fill. That's good short-term, but maybe not so much for the medium-term, as the December gap higher has never filled.

It is for this reason that I am trying to scale my buy order into the 200 Day SMA, which also happens to be the January low. That's where I see the best chance for substantial support, and if it gets there, that entire December gap will fill. So, why scale in at all Sarge? Why don't you just wait and buy the shares when they get where you think they're going? Simple, gang. Because that is how I get left with either nothing at all, or too small a position. I want to be long this name and long enough of it so in terms of weighting it can significantly impact my portfolio... maybe for the rest of my life, but I'll settle for through the entire global re-opening process. That's probably years.

Get an email alert each time I write an article for Real Money. Click the "+Follow" next to my byline to this article.
TAGS: Earnings | Economy | Investing | Stocks | Technical Analysis | Trading | Digital Entertainment | Movies | Resorts and Hotels | Sports