The Big Cheese is stepping away from the helm of the big mouse. Bob Iger is stepping down as CEO of Disney (DIS) , and Bob Chapek is stepping in. Is there something in the job description that requires the name "Bob?"

Initially, the market sold off on this news Tuesday after the bell. Shares rebounded this morning, likely given a boost by the market bounce, but we're fading into lunchtime. I'm not putting my hat into the good move/bad move corner yet. We won't know for six to nine months after Chapek assumes full-time duties how it might even begin to play out. And it's not as if Iger is disappearing as he'll remain Executive Chairman and direct the company's creative endeavors.

Iger will be likely involved with the integration of Fox assets, while Chapek steps into the top spot.

Fortunately, Disney is about more than one person, but there is concern regarding Chapek's experience. He comes from the parks world versus the current big push from the company on the streaming and content side. Can he transition from the physical world to the next generation of entertainment? That's a huge question, but as I said, we won't know the answer in the near term.

What will matter in the short-term is how the market reacts over the next week. Disney's stock has been hanging on by a thread after a rough start to the week. The gap left on Monday will be a trigger for momentum traders expecting a fill, but not until the stock gets back to $135. My bigger concern is a close under the $129 level. It's easy to see on the weekly chart how important support develops just below $130. This dates all the way back to the huge breakout in April 2019 followed by the retest in the fall of 2019. While it doesn't look like a big deal on the weekly chart, that bar in April 2019 actually represents a HUGE gap on the daily chart. 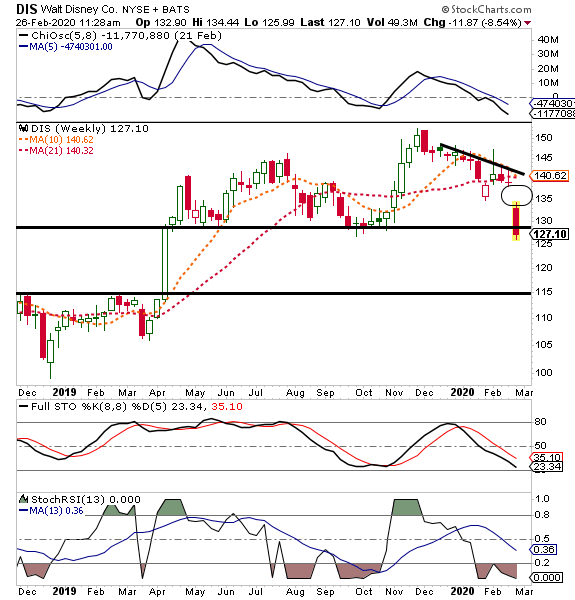 While trading under the previous support is a worry, a close under $124.75 may be a bigger issue. If that occurs, then we're into the gap left in the wake of April 2019. The downside target? $117. That would take the wind out of the sails in terms of confidence surrounding a change at the top. Bulls need to recapture $129, and in a hurry. A weekly close under that level turns it into resistance. Worse, it paints a bullseye, or I should say bearseye, on the $125 level. If sellers can break that mark, then I would definitely be on the sidelines from Disney until we trade down to $117. As it stands now, I'm on the sidelines or a seller below $129. I don't see a reason to accept the downside risk here. I'd rather wait for a close above $130 or a test of $117 before stepping in to buy.

Get an email alert each time I write an article for Real Money. Click the "+Follow" next to my byline to this article.
TAGS: Investing | Stocks | Technical Analysis | Trading | Media | Movie Production | Resorts and Hotels | Stock of the Day