Baby Yoda. Got your attention? Good. Have to tell you that I myself have taken a real liking to the little green fellow. I mean who amongst us doesn't smile when we see Baby Yoda... and who amongst us hasn't dreamed of being "The Mandalorian" when we grow up. What could be more glorious than living the life of an anonymous, helmeted warrior living a Spartan life driven by devotion to duty? The concept is the stuff of goosebumps.

The Walt Disney Company (DIS) reported the firm's fiscal first quarter financial results on Thursday evening. Not just good. Very good in comparison to expectations. Perhaps no media and entertainment entity has evolved and refocused in this pandemic environment as had Disney in such a way as to maximize the impacts of what could be done while minimizing impacts where nothing could be done to soften the blow to revenues.

Disney has streamlined its reporting structure for the quarter and I imagine going forward in order to better group businesses with something in common. This also makes our jobs easier. Business units are now... One... Disney Media and Entertainment Distribution, and Two... Disney Parks, Experiences and Products.

Disney Media and Entertainment Distribution contributed $12.661 billion in revenue to the whole. Linear Networks remains the largest single subcomponent of the unit, contributing $7.693 billion in sales, up 2% year over year. This includes cable, and broadcasting to include the ABC television network and ESPN, as well as a vast collection of both domestic and international channels.

The second largest and now most important subcomponent of Media and Entertainment Distribution is "Direct-To-Consumer" or the "streaming services" to most of us. This business drove revenue of $3.504 billion, up 73% y/y. This is where the growth is, and is the reason why Disney has not just sustained equity prices where they were, but has experienced an incredible lift in valuation. Disney Plus subscribers ended the quarter at 94.9 million (consensus: 91 million), up from 73.7 million over three months, driven to some degree by the integration of India's "Hotstar". Hulu subscriptions increased from 36.3 million to 39.4 million, while my favorite streaming service... ESPN Plus saw subs increase from 10.3 million to 12.1 million. I just hope that Korean Baseball is back this year. Having live baseball on TV in the middle of the night literally saved my sanity when I was suffering the most with that darned virus and the post-viral syndrome that followed.

Content Sales/Licensing and Other is the smallest of the three businesses within the Media and Entertainment segment. This business contributed $1.702 billion, which was a contraction of 56%. This for those who may not have figured it out is mainly the cinema, and that pretty much explains the performance.

Disney Parks, Experiences and Products posted sales of $3.558 billion, down 53% from the prior year. No surprise here. Walt Disney World in Florida and Shanghai Disney were both open, but faced capacity restrictions. Hong Kong Disney and Disneyland Paris were both closed for long stretches over the three month period. Disneyland in California was closed for the entire period. In addition, the cruise ships are not cruising at all either. On that note, CEO Bob Chapek did note with some optimism that whenever capacity has been allowed to increase so has business. Chapek also notes that forward looking, bookings are not bad at all. Folks do want to go on a Disney vacation when it is safe to go.

Consumer Products, which is also part of this unit did much better than expected. You may not be able to take your child on vacation these days, but you can buy them their own Baby Yoda for the holidays, and it appears that this is exactly what the public did. 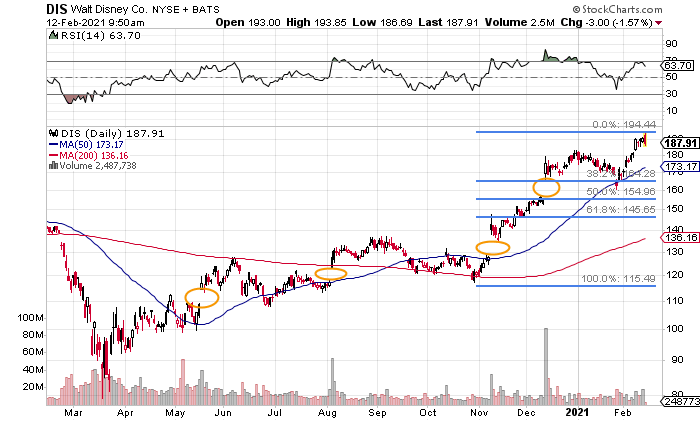 Yes... The Walt Disney Company has done everything right, considering. Yes, Disney is going to be one of the great reopening plays as economic activity normalizes. That said, the shares ran into earnings, and traded at 109 times forward looking earnings as of Friday morning. I don't mean to be a downer, but I expect the shares to come in a bit.

The orange circles (that look more like ovals) represent the four times that DIS has gapped on the road to recovery over the past nine months. The first two gaps filled properly. Gap number three has never come close to filling. Gap number four really did come close to being filled in January. Do gaps have to fill? No. Do gaps usually fill? Yes. I think that first gap might still fill, and I will be using weakness in this stock when it arises to reinitiate a long position. I will enhance the effort by writing naked puts against the stock where and when I deem appropriate in order to reduce net basis while exposing myself to increased equity risk at levels I find acceptable.

Notes: The trader who does choose to purchase equity here is reducing the expense through the sale of a series of options. In exchange for these net basis reducing premiums, the trader has limited profit over the next three months, while increasing potential exposure to broader equity risk at levels where gaps have failed to fill since November.

Get an email alert each time I write an article for Real Money. Click the "+Follow" next to my byline to this article.
TAGS: Earnings | Investing | Options | Stocks | Technical Analysis | Trading | Movies | Consumer Discretionary | Sports