The British are coming! How soon can they get here?

The Walt Disney Company (DIS) reported the firm's fiscal fourth quarter results on Wednesday evening, completing for the firm... fiscal 2021. The firm disappointed, posting adjusted EPS of $0.37, GAAP EPS of $0.09, and revenue of $18.53B. Despite the 26% year over year growth in revenue generation, all three metrics fell short of what Wall Street was looking for. There were a few quirks in the overall data.

Total segment operating income printed at $1.587B, up 162% from the year ago comparison, but still well short of the more than $2B that Wall Street had in mind. This took me by surprise last night, because once I started working my way through the press release, one of the first items I zeroed in on was free cash flow. I immediately saw that free cash flow had printed up 62% at $1.522B (almost three times consensus) and let my guard down a little, mistakenly assuming that the rest of the report would read better than in fact it did.

Of course, given restrictions based on vaccination and testing status, the Biden administration has started to ease conditions for cross-border travel. While re-opened theme parks were a positive driver for the broader business this past quarter, that was accomplished largely with just domestic crowds in attendance. Given a little luck, and the grace of a hopefully abating pandemic, bring on foreign tourism. This is a positive that is not priced in just yet, because it can not be.

Disney reports results broken down into two large segments that are then broken out further into several business units. The larger segment is Disney Media and Entertainment Distribution. This segment contributed revenue of $13.084B to the whole, up 9%. but slightly below expectations. The lesser segment, Disney Parks, Experiences, and Products, posted revenue of $5.45B, up 99%, nearly doubling FQ4 2020. This number actually beat Wall Street. Unfortunately, both segments fell short of expectations for operating income, the smaller segment quite substantially.

Linear Networks, which is ABC, cable television channels and other owned TV stations saw revenue contract 4% to $6.866B.

Content Sales/Licensing and Other put together revenue of $2.047B, up 9%, but also short of projections.

Parks & Experiences enjoyed revenue growth of 126% to $4.166B, beating Wall Street. Within, domestic sales increased 270%, while international sales grew 46%. The firm makes the point that all four Disney cruise ships are in operation.

Consumer Products posted revenue of $1.284B, down 3%. The decrease in revenue was largely blamed on lower royalties from licensed game titles.

On the direct to consumer misses, and apparent gaps in content creation, CEO Bob Chapek said: "We are nearly doubling the amount of original content from our marquee brands, Disney, Marvel, Pixar, Star Wars and National Geographic coming to Disney + in FY '22, with the majority of our highly anticipated titles arriving July through September." Chapek expects expenses to rise over the first half of FY 2022, and net subscriber adds to ramp up toward the second half of the year. Supposedly the DTC team is working on 340 local original titles in various stages of development.

On ESPN and ESPN +, Chapek adds: "We're also moving toward a greater presence in online sports betting. And given our reach and scale, we have the potential to partner with third parties in this space in a very meaningful way."

I see four five star (at TipRanks) rated sell-side analysts that have opined on Disney since last night's earnings release. Of the four, there were two cuts made to price targets, and no downgrades. Daniel Salmon at BMO Capital, who already had the equivalent of a "hold" on Disney, cut his PT to $180 from $195. John Hodulik of UBS, who maintained a "buy" rating, reduced his PT from $220 to $205. Both Benjamin Swinburne of Morgan Stanley and Michael Morris of Guggenheim left "buy" ratings in place as well as PTs of $210 and $205, respectively. Disappointment in the quarter reported, was however... a theme.

I came in long the name, and I have added both last night as well as this morning. I still do not have an especially large position and can afford to be patient, which I intend to be. I am 3/8 of the way toward building what I would call a full position for this name. That means that I can probably add a little today, to get up to a half position ahead of Friday's big Disney + Event. I am currently down almost 5% on this position, and you all know my 8% rule, so I do have some flexibility here. Not that Friday will have any material impact on the business, but I think it quite possible if not likely that the event at least causes some positive market reaction. 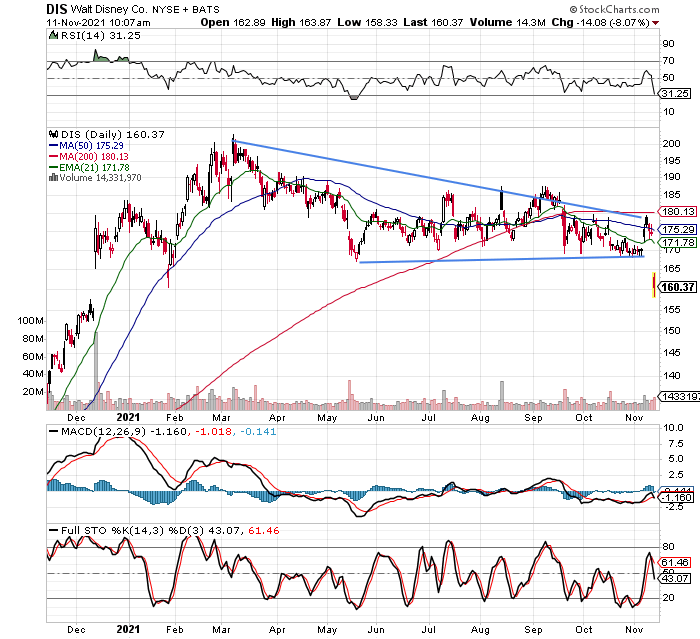 Readers will see that DIS shares broke down today from a closing descending triangle. $160 is the low from January 2021, and that seems to be where the shares caught some footing this morning. I would rather see the shares completely fill that unfilled $157/$165 gap from December 2020 than hold $160. This way, that's at least out of the way, and we can focus on filling the gap created this morning rather than something below.

I am holding some dry powder in reserve in the hope that I can deploy some capital between $157 and $159, hopefully today. $157.50 puts expiring tomorrow are still paying about $0.80. I think that might be an idea. I still think this is a $200 stock. Apparently so do several five star analysts. You know... I heard a rumor. I heard that the British are coming.

Get an email alert each time I write an article for Real Money. Click the "+Follow" next to my byline to this article.
TAGS: Earnings | Investing | Stocks | Technical Analysis | Trading | Media | Movies | Resorts and Hotels | Television Production/Distribution | Sports