On Tuesday evening, The Walt Disney Company (DIS) released the firm's fiscal fourth quarter financial results. To say that Disney had an absolutely awful quarter would be to understate reality.

The crunch? It's coming from heavy investment on the steaming businesses and a slowdown in advertising. The bright spot was in the parks, but as we are seeing, the parks can not carry the entire firm. Leadership here either has to evolve to changing economic conditions or get out of the way. The stock traded significantly lower overnight.

Disney Media and Entertainment Distribution drove revenue of $12.725B (-3%), generating operating income of $83M (-91%). Both Of these numbers fell short of Wall Street expectations.

Disney did not provide any guidance in the press release. In the call, CFO Christine McCarthy provided a loose outlook for fiscal year 2023. Assuming no "meaningful shift in the macroeconomic climate, the firm expects both full year revenue and segment operating income to grow at a high single-digit percentage rate versus the fiscal year just concluded." (Wall Street was looking for projected revenue growth of up around 12.5%.)

McCarty also mentioned that cash spent on content will rise from FY 2022's $30B, while CapEx rises from $5B in FY 2022 to $6.7B. Better hope that no meaningful shift in the macroeconomic climate arises. The yield spread between the US Ten Year Note and the US Three Month T-Bill suggests that economic winter is coming.

Disney ended the quarter with a net cash position of $11.615B, and inventories of $1.742B. This left current assets at $29.098B (-13.6% y/y). Current liabilities come to $29.073B. This leaves Disney's current ratio at a just barely acceptable 1.0. The firm's quick ratio stands at 0.94, which does not thrill me. Twelve months ago, Disney ran with a quick ratio of 1.04. There has been some notable deterioration in the quality of this balance sheet.

Total assets add up to $203.631B, including "goodwill" and other intangibles of $92.794B. This is 45.6% of total assets. While I am uncomfortable with such a high percentage of assets being labeled as intangible, it would be difficult to actually place a dollar amount on Disney's brand name and public facing position across several businesses.

Total liabilities less equity amounts to $104.752B. This includes $45.299 in long-term borrowings. That debt is down from a year ago, but there is a lot of work to do in order to bring the debt-load more in line with the cash position. The best thing I can say about this balance sheet is that it is not a disaster. That does not make it fortress-like in the least.

Since these earnings were released late Tuesday, I have noticed nine sell-side analysts that are both rated at four stars or better at TipRanks and have opined on DIS. Among the nine analysts, there are seven "buy" or buy-equivalent ratings and there are two "hold" or hold-equivalent ratings. The average target price across the nine is $116.33, with a high of $135 (Philip Cusick of JP Morgan) and a low of $94 (Doug Creutz of Cowen & Co).

Omitting the high and the low as potential outliers does not move the needle much. The average target price across the other seven analysts comes to $116.86.

Performance for the quarter was a huge disappointment. Guidance was not very helpful and what we did hear was also disappointing. The balance sheet is not as strong as it was just a year ago. Direct to Consumer needs to improve in terms of reaching profitability more quickly than it is. Linear Networks needs to slow its descent. Even trading with an $88 handle, down 11% this morning, the stock trades at 18 times forward earnings, so it is not cheap here.

The troubling thing is that it is difficult to see any improvement going forward for quite some time the way things are. The call was almost an embarrassment, as if management has no idea that their performance is and has been anything but completely unacceptable. 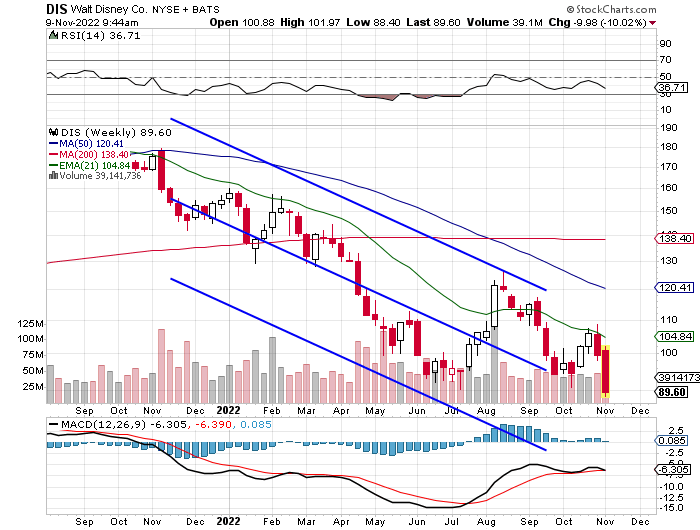 DIS now falls into the high $80's testing both the lows of July and the central trendline of our Regression model. Relative strength is weakening as the stock's daily MACD suffers a bearish crossover of the 26 day EMA by the 12 day EMA. The stock now trades at a 14.5% discount to its 21 day EMA and a 25.6% discount to its 50 day SMA.

I am long these shares at an average price of $92.54, so I am not experiencing great pain at this point, but this position was a nice winner earlier this week.

Do I want out of Disney? At this point I do. Does it make sense to sell the shares here? No. I will probably day trade these shares for the rest of the week and try to make back my 4% loss.

However, if I did want out right now, it would make more sense to write December 23rd $89 calls against the position for about $5. This way if the trader does get called away, the out price improves from $89 to a net $94. If the trader does not get called away. then said trader pockets the five bucks and still has to get out of a sagging equity position.

Get an email alert each time I write an article for Real Money. Click the "+Follow" next to my byline to this article.
TAGS: Earnings | Investing | Stocks | Technical Analysis | Trading | Media | Movies | Resorts and Hotels | Consumer Discretionary