I tend to dabble in Roku, Inc. (ROKU) options more often than in the equity itself. On January 6th, the stock started acting a little better after more than a week of moving lower to sideways. I decided to start building an equity position. As long-time readers well know, I often move in eighths. My entry into a position is usually 1/8 of my intended size. It can be 1/4 if I feel a need to be aggressive, it can be 1/16 if I am less sure of myself. On January 6th, I purchased 1/8 of a "full position" in ROKU at $343.10. On January 7th, ROKU rallied 10%, and never looked back. I never added more, which for me is the difference between an investment and a trade. A trade takes off too quickly for me to build much of a position. An investment happens more gradually.

Hence, my trades, particularly in this environment have decisively outperformed my investments. I saw the ROKU earnings. The stock was trading higher into the pre-opening hours. I sold that smallish stake in ROKU just ahead of the close on Thursday, as I did not trust these earnings given the extreme volatility in the shares earlier in the week. I would have done better had I sold ROKU on Monday. I would have done better had I not even sold ROKU. That said, I turned more than a 31% profit in less than six weeks, and one thing we don't do here is gripe about profits. No "wouda, shoulda, coulda's" here. All I want to know is if I should jump right back on the bandwagon. So... let's think about this together and come up with something useful, shall we?

Nice quarter. For the firm's fourth quarter, ROKU reported earnings of $0.49 per diluted share. Not only did this number beat the street, the street was looking for a net loss. This trounced the street. The firm generated $649.9 million in revenue for the quarter, also a beat, and good enough for year over year growth of 58%, which was incredibly a deceleration from the torrid pace of growth experienced for Q3, but still generally above the firm's pre-pandemic trend.

Gross Margin expanded 770 basis points for the year to 47%, but that does not mean that the firm's two business units perform anywhere close to each other. ROKU generates most of the firm's revenue selling advertisement on its streaming platform. That platform contributed $417.2 million (+81%) to the whole of $649.9 million. Player revenue expanded 18% to $178.7 million. Here's where it gets interesting. The firm posted net income of $67.3 million, but move up a few lines on the consolidated statement of operations provided by the firm, and we see that gross profit came to $305.5 million, and that the platform drove $300.8 million of that total. Player derived gross profit amounted to just $4.6 million. Incredible.

Overall though, it is very difficult to find anything wrong with the quarter. Adjusted EBITDA ramped 650%. Average revenue per user popped 24%. The number of active customer accounts increased by 39%.

The balance sheet is in great shape. Cash and cash equivalents have more than doubled over the full year, accounts receivable have popped nicely. Total assets are growing much more quickly than total liabilities less stockholder equity. The firm has not added long term debt, and has not padded the Goodwill entry. Pristine is what I would call it.

In 1962 (back when home runs were still special), Roger Maris hit 33 home runs for the New York Yankees and drove in 100 RBIs. Great season by any measure. Made the all-star team. Any measure except when measured against his own season in 1961... when he hit 61 HR (still considered by baseball fans to be the legitimate record) and drove in 141 RBI.

As planet earth emerges from the scourge of the Covid-19 pandemic, chances are that ROKU will have this same problem. On page seven of the firm's 12 page letter to shareholders, CEO Anthony Wood and CFO Steve Louden say as much... "We are mindful that in 2021 year over year comparisons will be quite volatile. In the first half of the year, we expect strong financial comparisons as compared to the first half of 2020 which includes the early impacts from Covid-19 and the resulting economic lockdown. While in the second half of the year, we anticipate much tougher comparisons thanks to our exceptional performance in 2H20, and Q3 in particular, as consumer interest in streaming surged and our monetization efforts rebounded from slower q2 growth levels. Thus, for the full year, our overall year over year revenue growth will fall below levels we expect to see in the first and second quarters of 2021."

The firm expects Q1 revenue to land in a range of $478 million to $493 million, well above consensus of roughly $455 million. However, the firm expects to experience negative net income ($-23 million to $-16 million) on adjusted EBITDA of positive $27 million to $34 million. 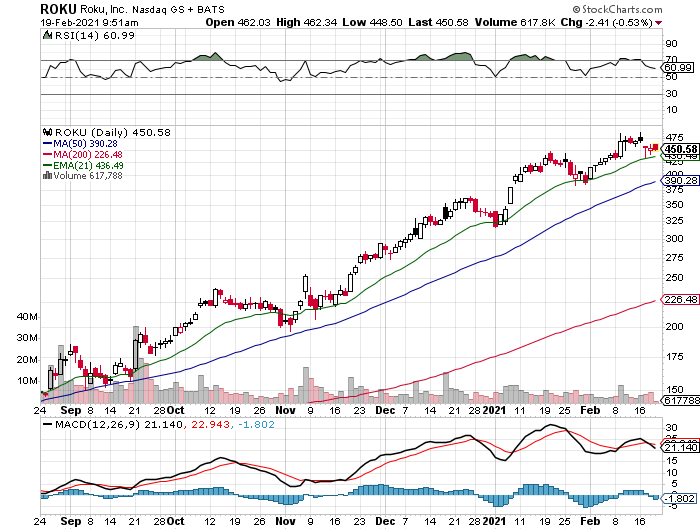 I do not expect to immediately jump right back on this stock. Let's not forget that the direct competition is Apple (AAPL) , Amazon (AMZN) , and Alphabet's (GOOGL)  , so I am thinking we wait and see if the "swing" crowd saves this stock at the 21 day EMMA as they have for the past two days. Again, this firm is performing well and is built to last. I just want to see if Wall Street thinks the shares are expensive here. The 50 day SMA has not been tested in almost three months. If one is willing to play that game, $390 put options going out one month from today are still paying about $9. That, my friends, is tempting.

(Apple, Amazon, and Alphabet are holdings in Jim Cramer's Action Alerts PLUS member club. Want to be alerted before Jim Cramer buys or sells these stocks? Learn more now.)

Get an email alert each time I write an article for Real Money. Click the "+Follow" next to my byline to this article.
TAGS: Earnings | Investing | Markets | Stocks | Technical Analysis | Trading | Gaming