Tesla (TSLA)  has become a cult stock. A stock that represents the future of transportation, technology, vision and more all wrapped together. And bitcoin has captured the attention of big and small investors around the world as it has soared to the stratosphere. It was just a few days ago that the financial world learned that Tesla had bought a chuck of the cryptocurrency. It was just December 20th that the company entered the S&P 500 with a hefty 1.69% weighting.

There is an old Wall Street saying that says that news on stocks is not important but rather how the stock reacts to the news is what is important. Let's check out a few charts.
In this daily bar chart of TSLA, below, we can see that prices raced higher from mid-November ahead of the announcement by S&P of Tesla's inclusion in their cap-weighted index. Prices finally stopped advancing in late January and they have retreated down to the end January lows.
With the price of bitcoin soaring this month why hasn't TSLA soared still higher?
Back to the chart - trading volume has been lighter than average the past four weeks or so. The On-Balance-Volume (OBV) line has turned flat suggesting a balance between aggressive buyers and aggressive sellers.
The Moving Average Convergence Divergence (MACD) oscillator crossed to the downside last month for a take profit sell signal.

In this weekly Japanese candlestick chart of TSLA, below, we can see a two-week pattern very close to a bearish engulfing pattern. Actually it is called a dark cloud cover and like the bearish engulfing pattern it is a top reversal.
The weekly OBV line has leveled off and the MACD oscillator has narrowed telling us that the strength of the uptrend has weakened.

In this daily Point and Figure chart of TSLA, below, we can see that a trade at $779.45 could weaken the picture. The software is already projecting the $670 area as a potential downside price target. 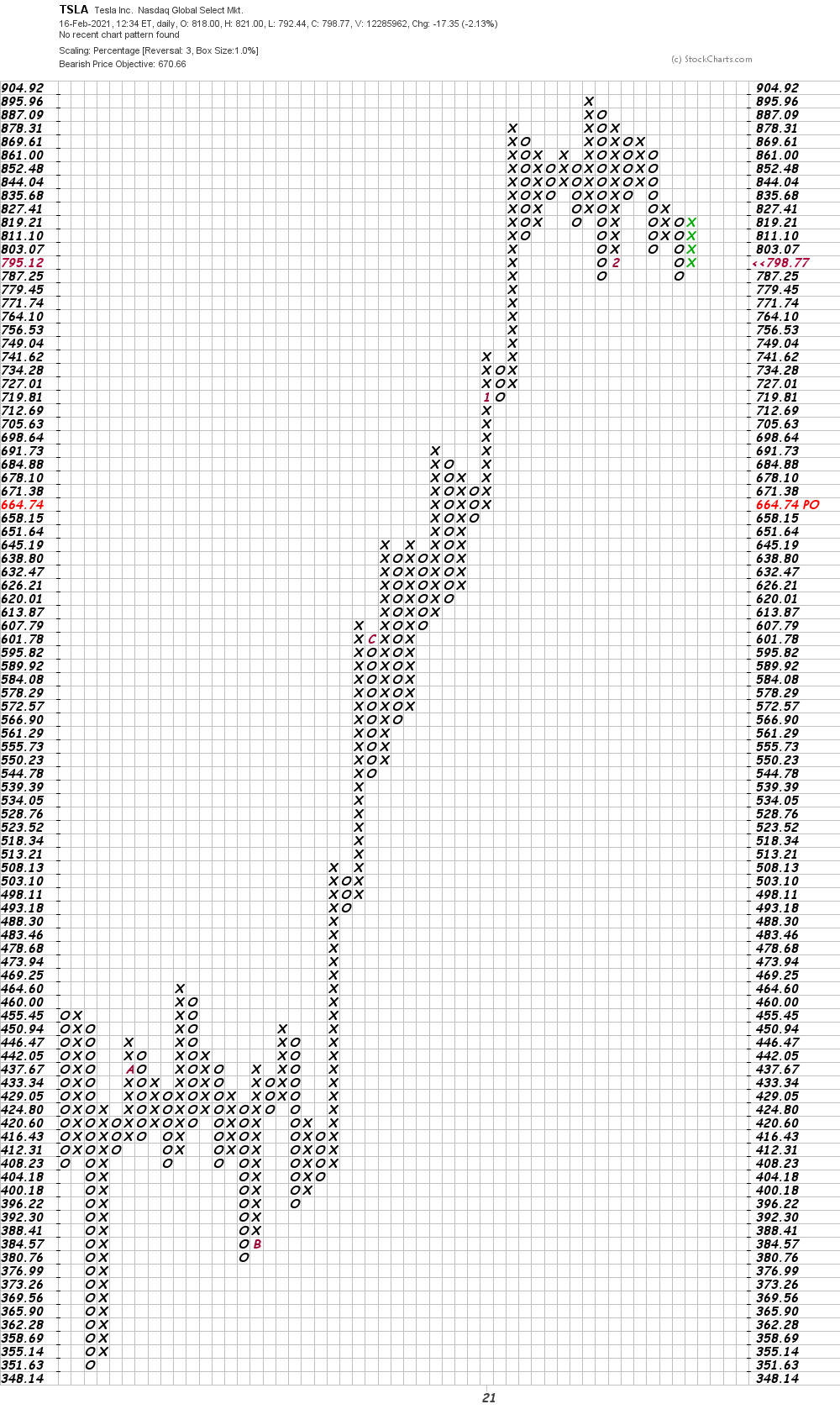 Bottom line strategy: Wall Street analysts have been leapfrogging each other as they raise their price targets for TSLA. Piper Sandler analyst Potter recently took his price target to a new Wall Street high of $1,200. Despite all seemingly bullish news, the stock has stalled and is looking like it can correct lower. Just as TSLA's strength lifted the S&P 500, its weakness can cut in the other direction.
Get an email alert each time I write an article for Real Money. Click the "+Follow" next to my byline to this article.
TAGS: Investing | Stocks | Technical Analysis | Trading | Technology | Cryptocurrency | Elon Musk | Electric Vehicles