For his "Executive Decision" segment of Mad Money Wednesday night on CNBC, Jim Cramer sat down with Michael Dell, chairman and CEO of Dell Technologies (DELL) , the IT infrastructure company that is once again publicly traded.

Dell explained that his company is now the leading IT infrastructure company, bringing together the best in storage with EMC, the best in servers with the old Dell and the best in virtualization software with VMware (VMW) . Dell currently owns 80% of VMW.

When it comes to infrastructure, especially in the cloud, Dell said his company services 99% of Fortune 500 companies and has some 20,000 scientists and engineers working on research and development. The company has spent $20 billion on R&D thus far and appears to be well positioned for the future.

(For more on Dell, see Jim Cramer's "Underestimate Michael Dell At Your Peril.")

Turning to the topic of artificial intelligence, Dell said that AI is meant to enable human potential and not leave swaths of society behind. He said it's important that creators of AI systems keep those goals in mind. All that sounds wonderful but it does not mean much without superior stock performance.

Let's check out the charts and indicators this morning.

In this daily bar chart of DELL, below, we can see that we do not have a lot of current price history to work with. Dell the company and the man are known entities but recent price history is on the light side.

The Moving Average Convergence Divergence (MACD) oscillator crossed to the downside in early March to signal a take profits sell signal. This oscillator has been narrowing recently and may or may not cross to a fresh buy signal. It all depends on the price action going forward.

In this Point and Figure chart of DELL, below, we can see what prices could be key in the weeks ahead. A rally to $59.23 would be bullish but a decline to $51.53 would be bearish. A $45 price target is being indicated at this point in time. 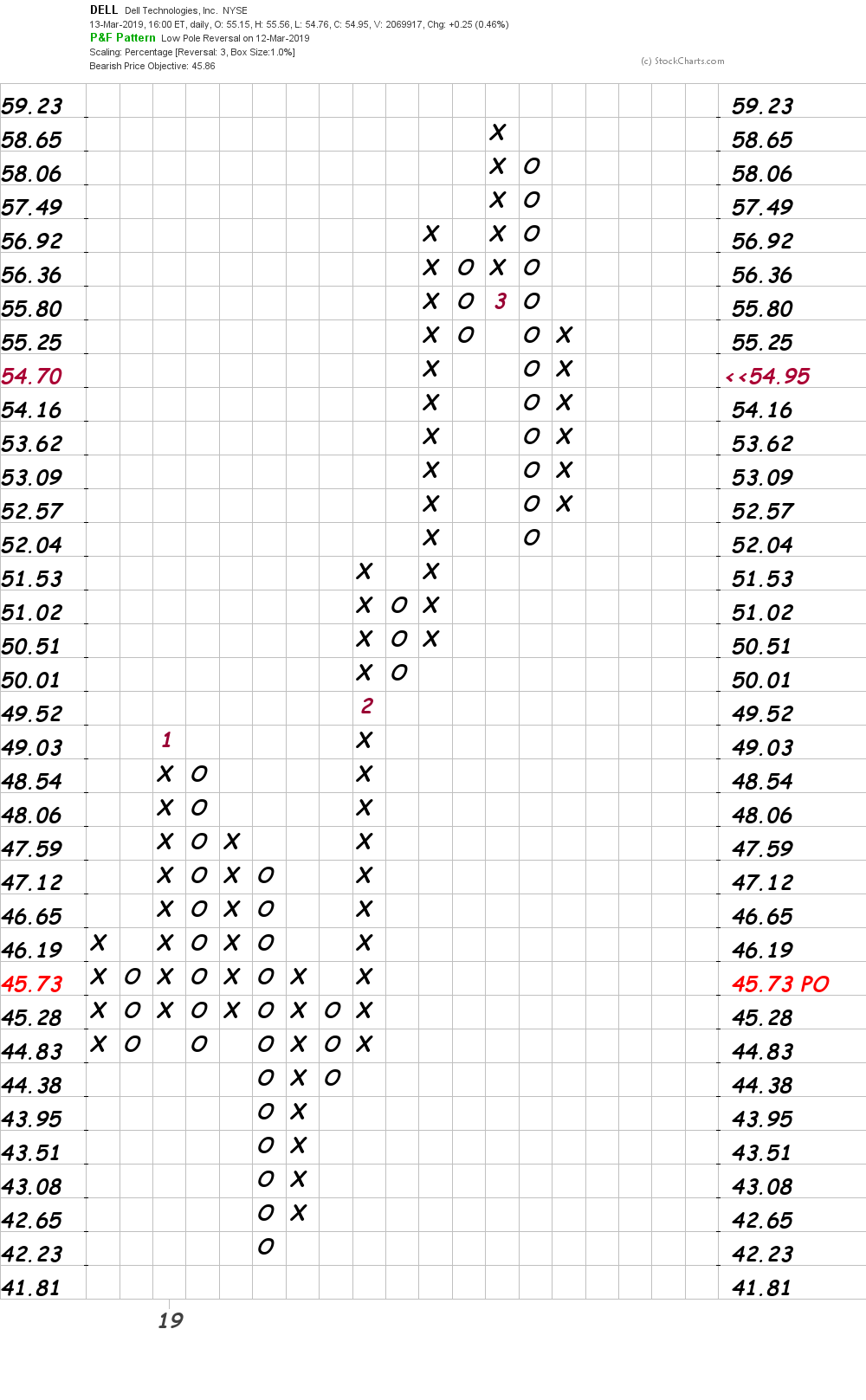 Bottom line strategies: DELL could move higher from here but the charts currently have a bearish tilt to them in my opinion, so I would either stand aside waiting for a better buying opportunity or take my money and attention elsewhere.

Get an email alert each time I write an article for Real Money. Click the "+Follow" next to my byline to this article.
TAGS: Investing | Stocks | Technical Analysis | Trading | Technology | Technology Hardware & Equipment | Telecommunications