As the trade war lumbers on, some stocks are being held hostage, Jim Cramer told viewers of Mad Money last Friday. One of those stocks is Dell Technologies (DELL) , which has transformed itself from a PC and printer company into a technology consulting powerhouse. Cramer told viewers that he would be a buyer of Dell into any additional G-20 summit weakness this week.

Investors should also consider VMware (VMW) , the virtualization company where Dell owns a large stake. Cramer said VMware is an even better deal than Dell. Let's round out the discussion by a look at the charts of both of these companies.

In this daily bar chart of DELL, below, we can see a fairly steep decline from the middle of May. There is a gap to the downside as prices break below the cresting 50-day simple moving average line. The selloff doesn't end and DELL closes below the flat 200-day average line. We can also see that a rally to the underside of the 200-day line failed.

The daily On-Balance-Volume (OBV) line shows a decline from early May telling us that sellers of DELL have become more aggressive.

The Moving Average Convergence Divergence (MACD) turned lower in May to a take profits sell signal then an outright sell in early June as the indicator fell below the zero line. The other day the oscillator turned upwards to a cover shorts buy signal.

In this weekly bar chart of DELL, below, we can see that prices are below the flat 40-week moving average line.

The weekly OBV line has moved lower the past six weeks and the MACD oscillator on this longer time frame crossed to a weekly take profits sell signal.

In this Point and Figure chart of DELL, below, we can see an upside price target. A decline to $51.02 will probably turn this chart bearish. 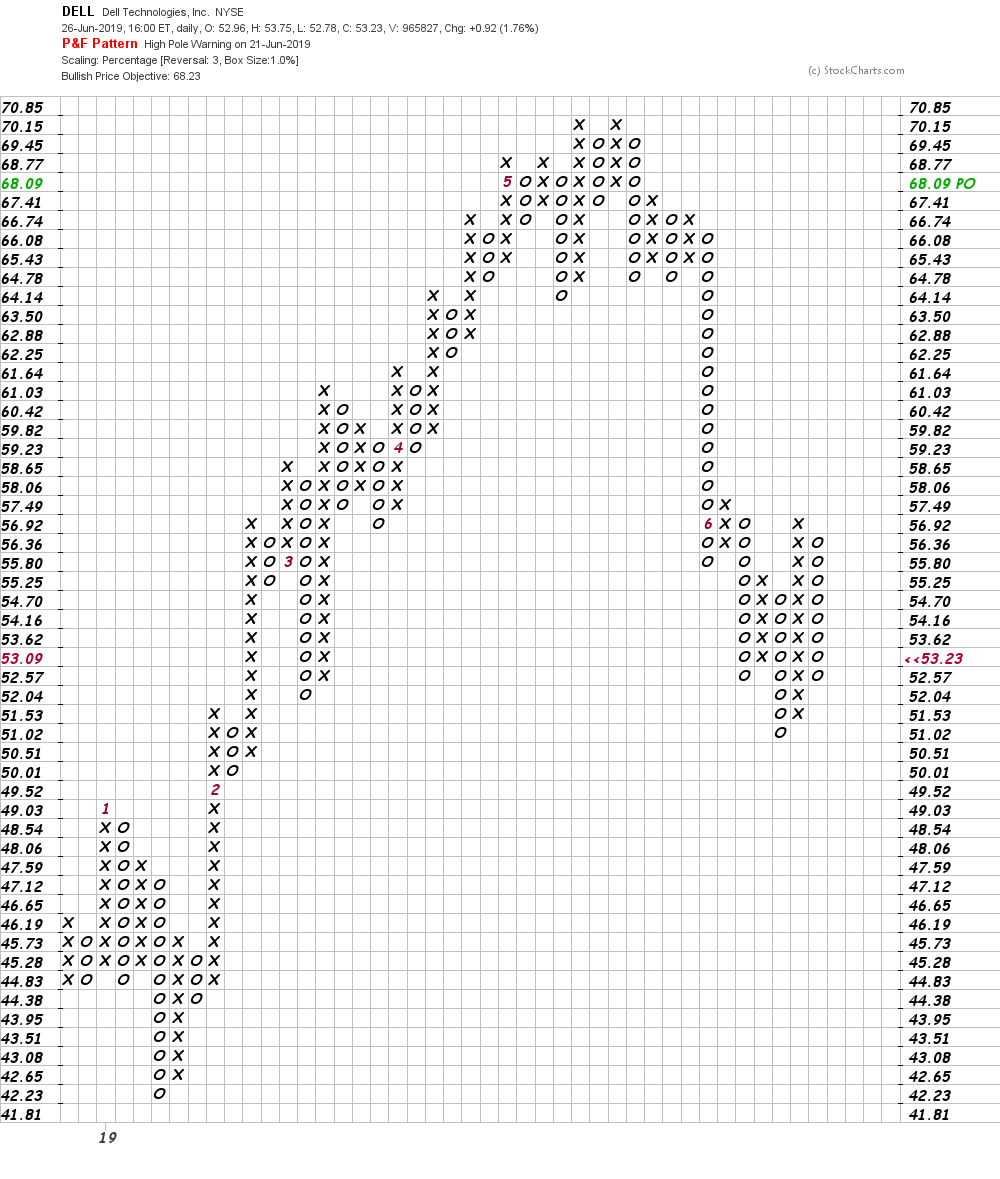 In this daily bar chart of VMW, below, we can see a chart picture a little different than the one above for DELL. Prices sold off sharply from the middle of May to early June. There was a gap to the downside in the middle of the decline but prices have so far held above the 200-day moving average line.

In this weekly bar chart of VMW, we see that prices are above the still rising 40-week moving average line. The weekly OBV line shows some decline (read - selling) and the MACD oscillator is in a take profits sell mode.

In this Point and Figure chart of VMW, below, we can see a bullish upside price projection, however, a trade at $166.72 could well turn the chart bearish. 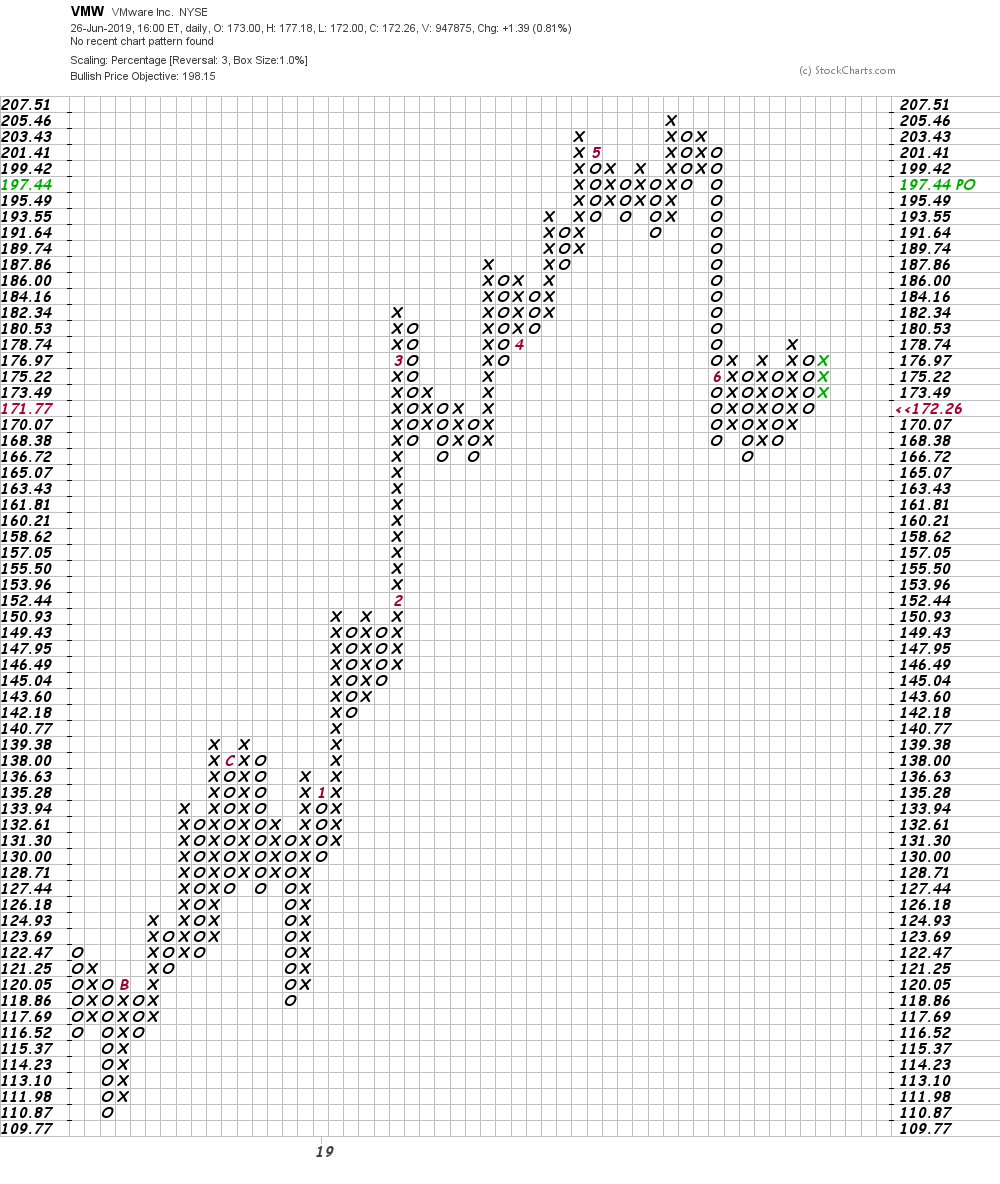 Bottom line strategy: DELL and VMW have similar but difference chart patterns. A classic chart reader might consider the patterns of the past five or six weeks to be bear flags. A bear flag would mean that prices could be vulnerable to another sharp move lower.

If you are playing these stocks from the long side I would have a sell stop just below the recent lows.

Get an email alert each time I write an article for Real Money. Click the "+Follow" next to my byline to this article.
TAGS: Investing | Stocks | Technical Analysis | Trading | Technology | Technology Hardware & Equipment | Mad Money