Deere & Co. (DE) reported the firm's fiscal third quarter financial performance this (Friday) morning. It's safe to say that while many firms are impacted directly by the trade war between the U.S. and China, and others indirectly due to the uncertainty that this environment creates... that Deere is probably impacted disproportionately. The firm is not only a traditional industrial type operation reliant upon steel prices as a capital good, but also reliant upon the agricultural community as primary consumers of the firm's finished products.

Deere reported adjusted Q3 EPS of $2.71, still 5% earnings growth, yet well below consensus expectations, and a third consecutive quarter of slowing growth. Revenue, conversely, beat expectations at $10.04 billion. That number, however, printed in year over year contraction (-2.6%), down 11.5% sequentially.

Sales in Equipment Operations declined 3% from a year earlier, while operating profit for the unit declined 6%. This is broken down further in the press release to Agriculture & Turf, and Construction & Forestry. Check this out. For Agriculture & Turf, net sales declined 6%, producing a 24% decline in operating profit. Operating margin for this line of business dropped to 10.3% from 12.8% last year. There's your trade war impact on this firm right there. The other, smaller business actually performed well. Construction & Forestry saw 1% growth in net sales, producing impressive 35% growth in operating profit, resulting in an operating margin that grew from 9.4% last year to 12.5%.

As a result of this performance, the firm is forced to lower guidance for a second consecutive quarter. That might be embarrassing, but understand this is not a case of poor corporate execution. Deere now expects full year net sales to grow 4%. This is down from a prior range of 5% to 7%. I think CEO Sam Allen summed it up well on Friday morning. The chief executive said, "Concerns about export market access, near-term demand for commodities such as soybeans, and overall crop conditions, have caused many farmers to postpone major equipment purchases. The firm is planning to move forward with a review of expenses in order to preserve/grow margin performance."

Speaking of purchases, or rather re-purchases, the firm spent $400 million buying back 2.6 million shares throughout the past quarter, reducing the outstanding diluted share count to 319.8 million. In December of 2013, the firm authorized a repurchase program allowing for $8 billion worth of re-purchases. That still valid authorization still leaves the potential for another $1.4 billion in buy-backs.

My opinion? Had the shares flushed out on Friday's opening bell, I would have probably looked to enter in incremental fashion. The shares are reacting very well to the call, therefore, I probably do not act, but this firm is invest-able, and is certainly not overvalued at 13 times forward looking earnings. 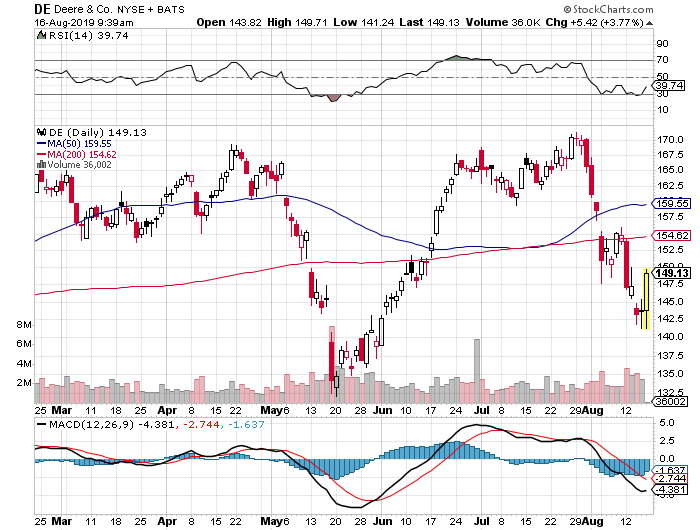 You can see the failed rally coming out of the May through July cup with handle pattern. Interestingly, should the early low of the day hold on Friday, these shares will have bottomed at nearly the same price for three sessions in a row. Is that meaningful? All basing patterns start somewhere. You get positive news on trade with China, and this chart will start to look like an upper deck Pete Alonso home run. I'm intrigued, but I'm not spending my own capital just yet.

Get an email alert each time I write an article for Real Money. Click the "+Follow" next to my byline to this article.
TAGS: Investing | Options | Stocks | Technical Analysis | Trading | Agriculture | Industrials | China

Even If You Don't Trade Copper, You Should Be Watching It

It isn't a coincidence that the copper market is teetering between feast or famine at the same time as the S&P 500.