You have heard footsteps from a long way out. A seemingly heavy, possibly powerful man, walking with an audible limp. What does he want? Why is he here? All lights out. Moon and stars, covered by clouds. He stops. The dim shadow of two feet barely visible beneath the locked door. He wants something. He's not angry, but don't bet he'll be kind. He's come here for you. He has a job to do.

The U.S. Senate passed legislation on Thursday night that basically adds $480 billion to the federal government's ability to borrow. This should kick the U.S. default can down the road at least as far as December 3rd, maybe a little further. The vote was close, getting by in a 50 to 48 vote with no Republican support. Honestly, I don't get the partisan games, once Senators McConnell and Schumer, representing both minority and majority leadership, had come to a temporary understanding. Guess I would make for a lousy politician.

This can kicking bill now goes to the House, but the House is not in session and will have to be called back. (Can this really be called full-time employment?) House Majority Leader Steny Hoyer expects the full House to vote on this bill on Tuesday, and it is expected to be passed there. At that point, the bill moves on to the president's desk, where it will be signed into law. Financial markets spent Thursday pricing in the removal of imminent default risk, and perhaps setting up extreme volatility at a time of year when capital usually flows into equity markets and liquidity usually dwindles. Oh joy.

The dim shadow of two feet no longer visible beneath that door. Barely audible, the powerfully large man, limps off. The sound tails down to almost nothing. Exhale. He is gone. Open the door slowly, peering off to the left and to the right, up and down the only road through this part of town. (We need roads that run in more directions.) No sign. Turn around to re-enter. A note on the door. "I'll be back."

Three consecutive "up" days for both the S&P 500 and the Nasdaq Composite. Ahead of September "Jobs Day" no less. Confidence should soar, yet it does not. At least not for this nine hundred and ninety-nine year market veteran. Ten of 11 select sector SPDR ETFs closed higher for the day, as Discretionaries (XLY) , Health Care (XLV) , and Materials (XLB) all tacked on more than 1% for the session. Only the Utilities (XLU) went south, as bond traders took yet another pound of flesh out of U.S. Treasury markets. The US 10 Year Note continued to sell off overnight, until finally hitting support around 03:30 am ET, yielding a rough 1.6%

Winners trounced losers by almost 5 to 2 at both the NYSE and the Nasdaq. Advancing volume topped declining volume by significant margins for names listed at both of New York's primary exchanges as well. That's all fine and good.

There is however... a "however" here. However, aggregate trading volume contracted from Wednesday to Thursday, quite aggressively for names listed at both exchanges, the Nasdaq in particular. Aggregate trading volume also contracted from Wednesday to Thursday for constituent membership of both the S&P 500 and Nasdaq Composite. To put it bluntly, professional money is not "all in" on this rally. There is caution.

One more thing. I am sure most readers are well aware that equities, while sharply higher in a broad sense for the day, did close almost sharply lower than where they had been early on Thursday afternoon. You do want to see how this looks on a chart. 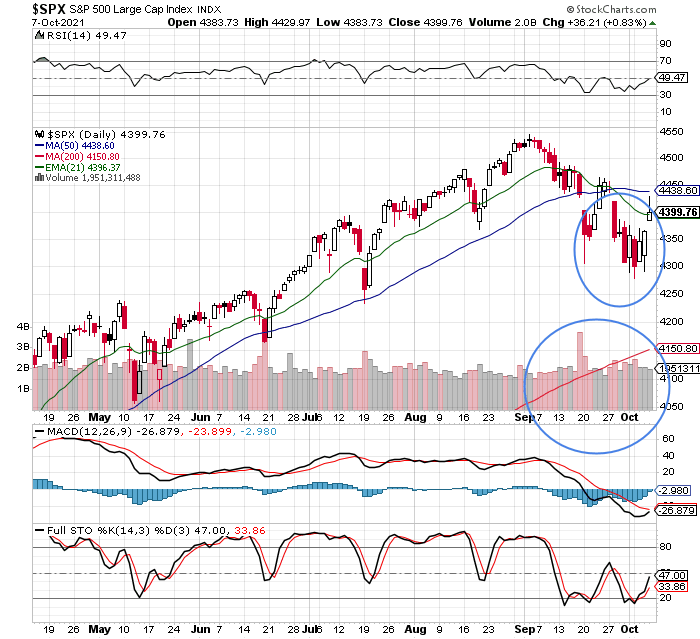 Note that the S&P 500 retook the 21 day EMA on Thursday, while failing in its approach to the more significant 50 day SMA. Note the unfilled gap left by the day's action. Note the successively decreasing volume as the three day rally wore on, and how much higher trading volumes have been on down days. 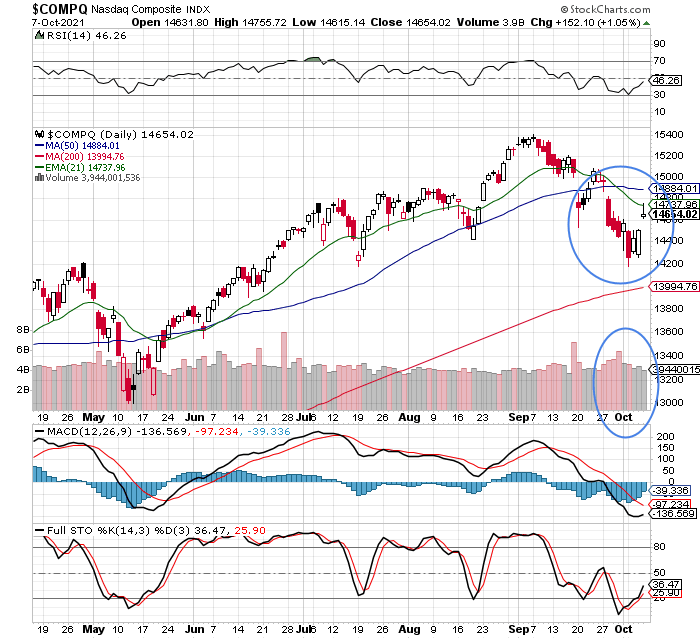 The Nasdaq Composite never even did more than temporarily pierce the 21 day EMA, and left the same unfilled gap, as well as the same apparent lack of conviction evident in trading volumes.

Yields are still rising. The dollar is strong. There are clear margin pressures around every corner. In other words, we have entered into a tough environment for corporate earnings. Large cap multinational corporations in particular. The phenomenon is even worse globally than it is here in the U.S. PPIs are running much higher than CPIs everywhere in the developed world and the spreads of -3%,and -2.4% are narrowest in the U.S., which means that corporations doing business in the U.S. will have a better time sharing spiking expenses with end users and consumers than will businesses operating elsewhere.

Some readers may have noticed that short positions are building in sovereign debt markets both home and abroad. Societe Generale's "Trend Indicator" (which I found at Bloomberg's website) shows short positions in the Japanese 10 year, UK 10 year, US 2 year and 5 year notes, and German 5 year debt futures among its 10 newest trades. CFTC positioning data for U.S. Treasury futures show that managers have sold $23 million per basis point of cash Treasuries over this past week, as hedge fund shorts are believed to remain elevated toward the long end of the curve. Does all this mean that interest rates are going higher? Probably, but it also means we may see a short squeeze first. Don't get caught in that trap.

I hear a lot of hot heads screaming about inflation being more than transitory without a lot offered in the way of a solution, just looking to score points through finger pointing. So, is this bout with inflation transitory? Of course, some of it is. Unless one believes that we never, ever beat COVID, or that manufacturers and exporters never figure out the kinks in their supply chains. No one promised anyone a time limit. I would still call as much as two years of heightened inflation "transitory" because I am not (I hope) a petulant child. Yes, wage growth and spikes in home prices and rents can be more structural than transitory, so inflation is not going back to sub 2% levels anytime soon, but it will come off of these levels.

Labor shortages have probably improved somewhat in September as folks have been rolled off of the federal "payroll", but labor supply can not fully recover until every two earner household that either wants or needs to be a two earner household does not feel compelled to have an adult at home. That's a COVID thing, and that could end up having a structural effect on labor markets that lasts depending on how "gun-shy" families have become in regards to being comfortable with the consistent reliability of in-person schooling.

As you can see below, I have 475K for non-farm payrolls for September this morning. I understand that I am slightly below consensus here. I understand that this contrasts with the ADP print on Wednesday. We'll see. I expect to see a mild drop in unemployment to 5.1% and perhaps a more aggressive drop in underemployment (8.5%) as participation spikes. The expected pop in participation makes predicting unemployment and underemployment rates a little tough.

The point is though, that the bar is set low. Unless we see negative or almost no job creation in this report, the Fed is going to move on November 3rd. They are going to announce the intent to taper at that time, and really depending on Congress, I believe the intent would be to act simultaneously with the announcement. The Fed needs to get the tapering of asset purchases down to a manageable level as soon as possible.

Again, we'll see. The FOMC as a group, I believe, feels the need to be flexible on short-term rate targets by mid-year 2022, which means that once the ball gets rolling on tapering, the committee will have to be aggressive. I do believe that the effort to get there from here will ultimately fail, as will both the U.S. and global economies in efforts to retain a normal looking pace of recovery. That is not for today's column. That is more the strategic than tactical view.

Ireland to sign on to the OECD's minimum 15% global corporate tax rate. Obviously, Ireland abandoning the 12.5% that literally modernized the country's economy is a big step, and a big win for most developed economies that would like to place a floor under these rates and remove haven seeking from the corporate equation. You may have heard of some of the firms that this impacts... Apple (AAPL) , Alphabet (GOOGL) , Amazon (AMZN) , and Facebook (FB) to name a few. The change of heart which will cost Ireland as much as $2 billion over coming years, leaves only Estonia and Hungary as EU holdouts. The EU needs all 27 members to vote unanimously or the whole enchilada is a "no-go."

You'll remember, if you read me often, that two weeks ago, Raytheon Technologies (RTX) and Northrop Grumman (NOC) successfully completed the first flight of a scramjet powered Hypersonic Air-breathing Weapon for the DOD. As you know, hypersonic weapons are currently indefensible, and both China and Russia are thought to be ahead of the U.S. on this technology which is why I harp on it so much. Washington does not seem to understand the urgency, as Russia launched a hypersonic weapon from a submarine earlier this week.

Well, both Sarge fave Raytheon and Northrop appear to be breaking out of basing periods of consolidation, while more or less having played by Leonardo Bonacci's (Fibonacci) rules year to date. Check this out... 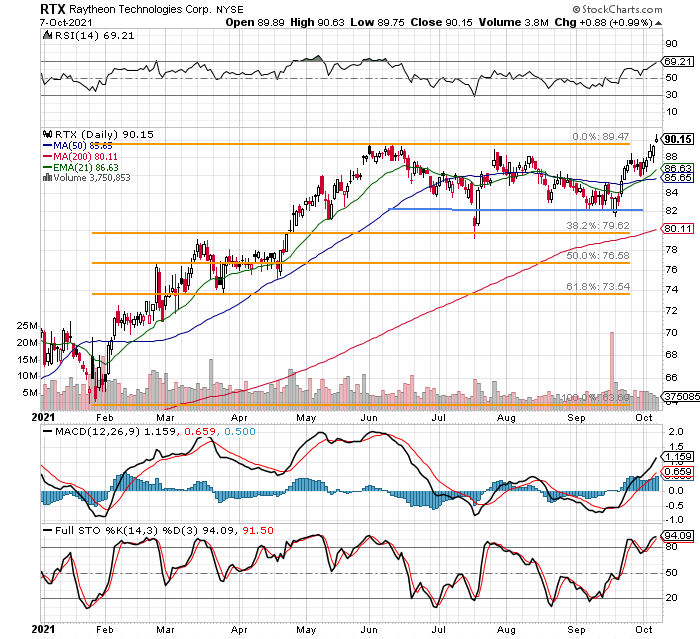 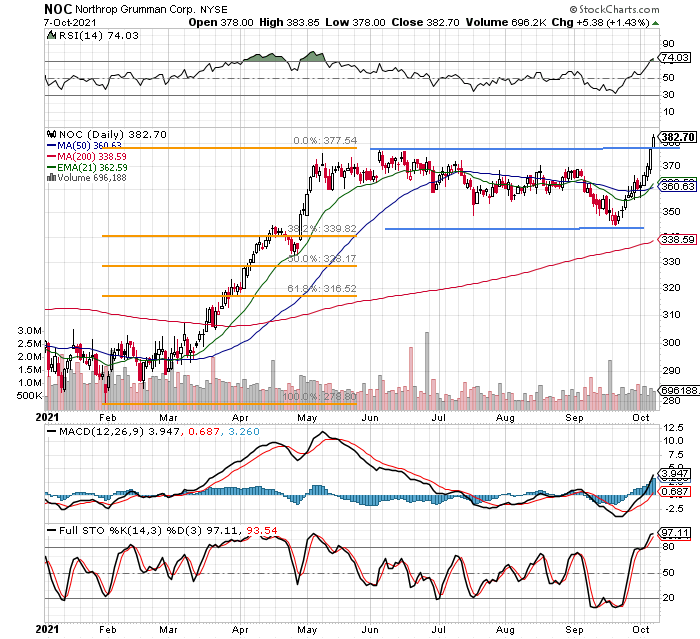 Both stocks now appear to be technically overbought, but that does tend to happen during breakouts. I currently have a $107 price target on RTX, and I was not smart enough to get long NOC, but if I were, and if you are... my price target would be around $450.

That the U.S. has a handful of special ops troops and U.S. Marines deployed to Taiwan to train local forces? Always faithful.

Get an email alert each time I write an article for Real Money. Click the "+Follow" next to my byline to this article.
TAGS: Federal Reserve | Interest Rates | Investing | Jobs | Markets | Stocks | Technical Analysis | Trading