I was tired. Yet, I waited up. Up for these two? Should have gone to sleep, or watched the Yankees play Cleveland. Could have impressed my wife and cleaned out the fridge. Anything. Literally, anything would have been more interesting than watching that debate, between those two candidates. I would love to hear thoughtful discussion, even well developed disagreement over the issues. Instead, you watched two seventh graders have a verbal slap fight. Think your side impressed? Not a chance. My bet? Not a single voter changed his or her mind last night, but a few may have decided to just not vote.

I thought of financial markets. Maybe something spoken on Tuesday could be market moving. The negative pall cast over European equity markets overnight as well as domestic equity index futures has less to do with anything spoken on either side, and more to do with a frustrating lack of outcome. I am currently reading a charming little book (about baseball and life) written by former All-Star first baseman Keith Hernandez in 2018. Before the world ended. That's what I should have done. I should have read my book.

Don't get me wrong. The candidates did touch on the handling of the pandemic, the recent Supreme Court nomination, social justice, potential voter fraud, and re-establishing order in several troubled U.S. cities. They sure did, often at the same time, with moderator Chris Wallace piping in often enough. The moderator who I really think tried to prevent chaos, lost control early. As in immediately. A three ring circus ensued. I am not going to go into who won last night's debate because I know that most folks already went in with a favorite as have many in the public eye. They will all spin what must be spun. Facebook (FB) will be unbearable today. Let me be clear, that's all it is, just spin.

My takeaway? Why this time? Why, of all election years has this one not produced at least any third party candidate worthy of mention? Such candidates have come and gone, often taking enough of the vote to impact elections. In 1992, Independent Ross Perot took 19% of the popular vote, impacting the electoral votes in enough states to prevent the re-election of the elder George Bush in favor of Bill Clinton who probably would have lost a two horse race that year. No, we do not need the kind of third party candidate that can tip the scales in favor of one of the two major political parties. We actually do need a thoughtful, viable third choice though. One that can scare the major parties just enough to publicly respect each other. And us.

Equity markets were trying to rally. The Nasdaq Composite (and Nasdaq 100) had posted three positive sessions in four, actually taking its own 50 day simple moving average. The S&P 500 (and the Dow industrials) had painted similarly green candlesticks of late, to set up at least an earnest attempt at taking that same line. Then, there was some mid-day news that rattled a few traders. Certain areas of both New York City and New York State were experiencing a sudden rise in the transmission of the coronavirus after that early epicenter of the pandemic had done so well for so long. Then, there was news from the National Football League. Several players and employees of the Tennessee Titans had tested positive. This news placed at least that team, and the team they played against last Sunday, the Minnesota Vikings (no positives so far, fingers crossed) on the shelf for now. No announcement has been made regarding this coming weekend's games for those teams.

This was enough to shake value investors and those in hopes of a continuance in the rapid economic recovery seen to this point, a recovery that has obviously started to slow down a bit. Crude was hit hard despite the fact that the US dollar index also moved lower throughout the day. The Energy sector sold off. Hard. The Financials? Better than Energy. That doesn't say much. Did anything go the right way? Sure. Internet type stocks led the Communications Services sector into the green (just barely), the only sector managing to do so. Information Technology as a whole traded lower as well, on weakness across both software and hardware. The semiconductors were the outlier, with both the Philadelphia Semiconductor Index, and Dow Jones US Semiconductor index showing gains on the day led by the likes of Advanced Micro Devices (AMD) , Qorvo (QRVO) , Nvidia (NVDA) , and Micron (MU) . On that note, Micron reported last night, and while returning to earning growth... that stock is trading 5% lower overnight on soft guidance.

There was a positive on Tuesday in the trading volume. Losers beat winners and declining volume beat advancing volume at the New York Stock Exchange. That said, NYSE composite trading volume decreased on Tuesday from Monday which was a religious holiday. That's hard to do. Volume also decreased on Tuesday from Monday up at the Nasdaq Market Site. However, at the Nasdaq, losers beat winners in a very close race, but advancing volume beat declining volume rendering the session nearly meaningless. The fact is that outside of the Dow Transports, nary an index gave up more than half of one percent.

There is a Difference

Technically, there is a distinction that must be made as the major indices appear set to come under some early morning pressure in the wake of presidential debate that at least to this observer, made two men look bad. The difference is this... 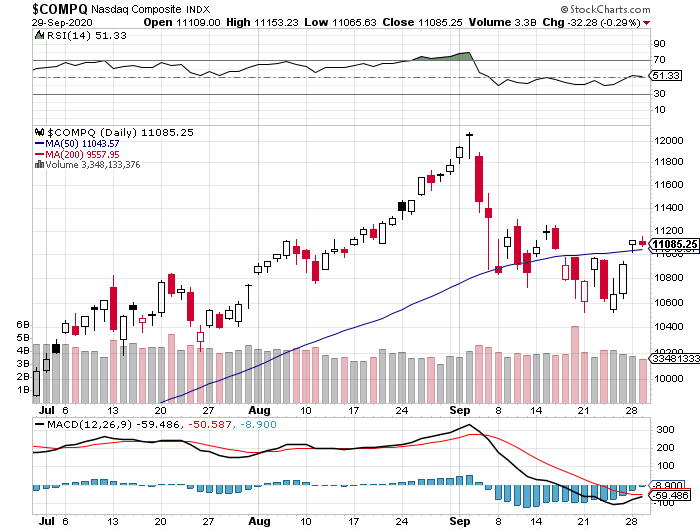 Though the Nasdaq Composite and Nasdaq 100 both gave up some ground on Tuesday, as of yesterday's closing bell the 50 day line had been successfully defended. That line will surely be tested on Wednesday. The positions of Tuesday's candles are quite different for the S&P 500 as well as the Dow Industrials. 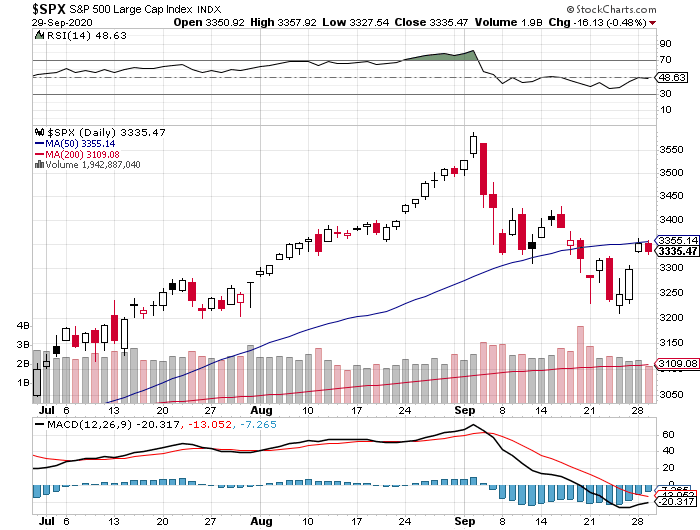 The read-out here? For the Nasdaq related large cap indices, that are much more reliant upon the tech sector and tech related industries outside of the sector, the line still appears as support. For the large cap indices more exposed to value or real economic recovery, the very same spot on the chart shows as resistance.

I think. What hope? Markets now look to the likes of Treasury Secretary Steven Mnuchin and Speaker of the House Nancy Pelosi to do something that those at the heads of their respective political parties could not do. Talk (and listen) to each other. We know that these two key players spoke on Monday night. We know that they spoke on Tuesday morning. We know that they have both agreed to talk again on Wednesday (today). They are engaging with each other in the attempt to find a middle. In 2020, that is something.

The House has already come down to a $2.2 trillion package (which is really $2.6 trillion offset by $400 million in revenue). As far as we know, the administration has gone as far as ballparking a $1.5 trillion idea. We know that this number has to go higher, even as we also know that this number may be too high for broad support from within the Senate. We also know that everyone has to get out of Dodge City to go campaigning, especially those caught up in tight races.

While we expect that Wednesday likely brings news on this front, we do not know just how positive or negative this news will be received. The debate may have put a negative light on the overnight session. This potential headline will decide where markets close later on.

I know readers took notice of the historic monthly increase seen for September in the Conference Board's measure of Consumer Confidence. Personally (you can check yesterday's Market Recon), I was looking for something just above 89. What the Conference Board put to the tape was a stunning 101.8, up from a revised 86.3 in August.

Can we trust this number, or maybe an outlier it is? Labor markets have improved, but not as quickly as hoped for after a positive reset. Weekly federal support for those on the receiving end of state level jobless benefits needs to be renewed. That's partially what the above paragraph is all about. This was the best headline number for this survey since March. So can we trust it? I'll let you know on Friday. After the Bureau of Labor Statistics releases its monthly employment surveys, and after the University of Michigan updates the September read-out on Consumer Sentiment.

- Regeneron (REGN) posted some early but positive data for one of the firm's Covid-19 treatment candidates. The investigational antibody cocktail REGN-COV2 did in the study reduce viral load as well as speed recovery in a clinical study of 272 non-hospitalized patients. Now, the cocktail will move onto a larger Phase 2/3 trail that will include 1,300 such patients. Regeneron is currently developing four therapeutic candidates in this fight against the virus. All are either in Phase 2/3, or Phase 3 trials. In addition to this one that targets non-hospitalized patients, two others target those who have been hospitalized while one would be a prophylactic meant for households where there has already been exposure.

- In saddening news, the Walt Disney Company (DIS) announced on Tuesday the layoffs of some 28,000 employees in the Parks, Experiences, and Products unit. Those impacted will come from the resort areas of Orlando, Florida, and Anaheim, California, as the firm's theme parks have suffered extensive shutdowns and only partial re-openings. Disney is as pure an economic recovery stock as there is. Beyond the parks, just think of the box office.

- When does Tesla (TSLA) announce vehicle deliveries for the third quarter? Any day now. Could be this week, or very early next week. CEO Elon Musk has set the bar high, emailing employees last week, stating the case for a potentially record setting quarter. "Battery Day" was something of a disappointment for investors. You knew Elon Musk would get more than one plate appearance, right? This stock has been so much more fun to own than it ever was to short. No joke.

(FB, AMD, NVDA and DIS are holdings in Jim Cramer's Action Alerts PLUS member club. Want to be alerted before Jim Cramer buys or sells these stocks? Learn more now.)

Get an email alert each time I write an article for Real Money. Click the "+Follow" next to my byline to this article.
TAGS: Economic Data | Economy | Investing | Markets | Politics | Stocks | Technical Analysis | Trading