Eighty-one years. I remember when my father could not believe it had been 30 years. Time flies. Echoes are forever. December 7th, 1941. 07:48 local time. 353 military aircraft (fighters, bombers, dive bombers and torpedo bombers) launched in two waves from six aircraft carriers would attack US military forces located on the island of Oahu, primarily the US naval installation at Pearl Harbor, in the territory of Hawaii.

2,403 Americans who had woken up on that otherwise pleasant Sunday morning in paradise, would never enjoy the opportunity ever again. Another 1,178 were wounded in action. Eight battleships were damaged, four sunk. Thirteen other naval vessels were either damaged or sunk including three destroyers. More than 180 military aircraft were lost. Losses were light on the Japanese side. 29 aircraft, and five midget submarines lost, 64 killed.

Fortunately for the US, a planned third wave had been cancelled as it would have required a night landing and refitting, and US gunnery had greatly improved during the second wave, once the shock had worn off. Just as fortunately, the US fleet of aircraft carriers, the real targets of the attack, were not home that morning. Those eight battleships? Seven were raised. Six would eventually join the war effort. One still lies there in the harbor. A permanent reminder.

Elsewhere, all but forgotten by history, Japanese naval and air forces would attack Wake Island on December 8th, 1941. Japanese forces included 2,500 infantry, and 23 vessels including two aircraft carriers, and two destroyers. The island was defended by 449 US Marines, 68 US Navy personnel and 5 US Army soldiers.

US forces sank both destroyers, two other smaller vessels, and shot down or damaged at least 30 aircraft. The defenders of Wake were few, but they knew what was coming. Even after losing the ammo for their bigger guns in one explosion, and running low on ammo for their small arms for days... that island held until December 23rd. Ooh-stinkin'-rah.

How was a smaller, less well equipped garrison at Wake more able to defend themselves than were those stationed at Pearl Harbor? Simple. They heard what had happened the day before on the radio. They knew that the Japanese Navy was coming for the isolated Pacific island held by US forces unmolested. They knew that the US Navy was in no position to help. They were as ready as they possibly could be, mentally, and with what they had on hand, for resupply and reinforcement were not options.

Markets are sending all kinds of warnings right now. What we are trying to figure out is if there will be a resupply. Recession looms. We think we know that. Bond markets are pricing this in. Equity markets seem to be catching up quickly. Do we get that seasonal rally into the year's end? Will Santa make that appearance? Even if Santa does gift investors a rally over the final week of December into the first two days of January, where will markets be going into December 26th? Where does that leave typical January capital inflows? These will not be easy questions to answer this year.

Equity markets took a drubbing on Tuesday, and this time I could not explain it away one way or another. The S&P 500 gave up 1.44%, as the Nasdaq Composite backed up an even 2%. The Philly Semiconductor Index, KBW Bank Index, Dow Transports, and Russell 2000 were all hit with the ugly stick for a second day this week. The S&P 500 has now painted the tape various shades of red for four consecutive sessions and for seven sessions in the past eight. The only "up" day in the batch being last Wednesday's Jerome Powell inspired pop.

Ten of the 11 S&P sector SPDRs went red as well on Tuesday, led lower by Communication Services (XLC) , Energy (XLE) , and Technology (XLK) , as all three of these funds were pasted for losses of more than 2%. Utilities (XLU) shaded green and were followed at the top of the performance tables by Staples (XLP) , REITs (XLRE) , and Health Care (XLV) as it became obvious that equity traders were trying to hide in more defensive sectors.

Breadth was ugly again. Losers beat winners by a rough 5 to 2 at the NYSE and by about 7 to 3 at the Nasdaq. Advancing volume took a 31.1% share of composite NYSE-listed trade and a 19.7% share of that metric for Nasdaq-listings. Now, this is the kicker... Aggregate trading volume increased day over day across NYSE-listed and Nasdaq-listed names, as well as across the S&P 500 and Nasdaq Composite. In fact, Tuesday was the first day that aggregate trading activity across those two indexes reached their respective trading volume 50 day simple moving averages on a "down" day in over a month.

What does that mean? It means that the pros are reducing exposure. In the case of the NYSE and the S&P 500, Tuesday was the second successive day of increased professional selling. That, my friends, is our warning. This does not mean that this "bull market" in place since mid-October is done for, but it could. This does mean that the recent pressure and all of the signs and talk of a coming recession have finally rattled those who move money for a living.

Where Are We Now?

Treasuries remain strong, especially out on the longer end of the yield curve. The 10 Year/2 Year and 10 year/3 Month yield spread inversions both created new lows on Tuesday. On top of that, WTI Crude has been tanking since Friday and equities are in the crosshairs. 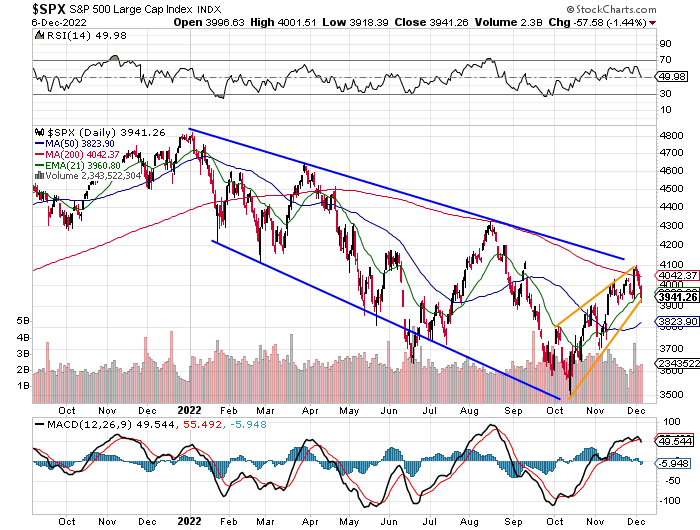 Readers will see that the S&P 500 surrendered the 21 day EMA on Tuesday, which turned any remaining swing traders to the dark side, as the daily MACD experienced that bearish cross-under that we have been watching for. Here, we also see that the "descending broadening wedge", which is a pattern of reversal, and has been in place all year, is still intact. We also see a much smaller, rising wedge in place since mid-October. 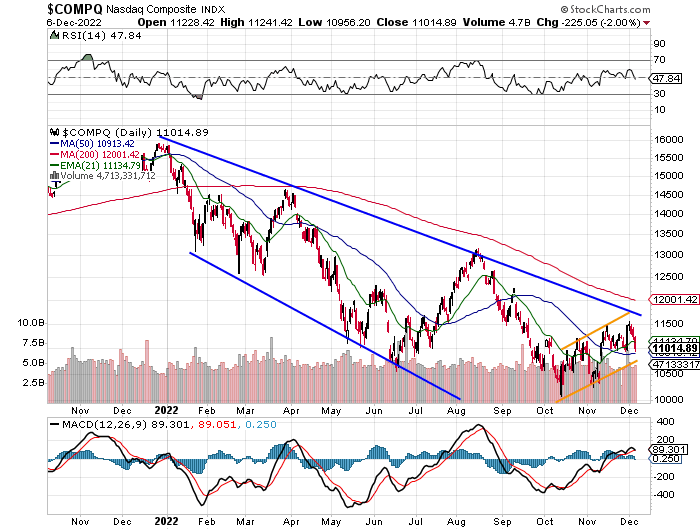 Readers will see much the same in terms of patterns and activity for the Nasdaq Composite even if the trend-lines are a little sloppier. The difference here is that after surrendering the 21 day EMA, the Nasdaq Composite now places its 50 day SMA in great peril. Think the professional pressure has gotten rough? We ain't seen nothing yet, kids, should that line fail.

Bankers are terrified. That's what. Many of them were out and about on Tuesday, and trading algorithms that target keywords were all over them. Goldman Sachs (GS) CEO David Solomon said, "When I talk to clients, they sound extremely cautious. Many CEOs are watching the data and waiting to see what happens." Solomon added that smaller bonuses and potential job cuts should come as no surprise.

Marianne Lake, co-CEO of JPMorgan Chase's (JPM) Consumer & Community banking division, said, "So the probability of recession has gone up. We're actually looking for that right now." Her boss, Jamie Dimon, was just as blunt... "Rates are now on their way to 5%. When you're looking forward, those things very well might derail the economy and cause this mild to hard recession people are talking about... so that may erode the economy."

Morgan Stanley (MS) CEO James Gorman said, "We've learned some things during Covid about how we can operate more efficiently. So that's something the management team is working on between now and the end of the year." Gorman made these comments as news broke that his firm would reduce payroll by about 2% (roughly 1,600 employees) ahead of a potential US recession. This happened as Bank of America (BAC) almost simultaneously announced a hiring slowdown.

It appears that the layoff bug that had already hit Tech was contagious and has now been caught by the Financials, which are more labor intensive than tech. Let's hope this doesn't spread to the industrials. That's where real national impact is.

Of course. Beijing is finally talking about trying to reopen. Are they full of it? One thing the world has learned over the past couple of years is that what China has done is fact. What China will do is a mystery. Stated intent has nothing to do with anything.

How have I been tackling this environment? Understand that I have not yet given up on a strong ending to 2022, despite having been miles ahead of the crowd on the recession call. I did cut my exposure to the banks on Monday morning, later than I know I should have, but at least ahead of most of this week's pain.

On Tuesday, I tried to take advantage of a rising US dollar as I think this is a temporary move, by gaining exposure to materials names like Cameco (CCJ) and Livent (LTHM) . Those are uranium and lithium plays for the uninitiated. This is more of a trade than an investment.

I have also been using general market weakness to increase exposure to cybersecurity. Despite still elevated valuation, this is where the growth still is. I do not see how growth can reverse, even if it does decelerate during recession for this industry. I have been adding to existing longs in Palo Alto Networks (PANW) and CrowdStrike (CRWD) , while initiating a small long on Tuesday afternoon in Sentinel One (S) . That one is still a cash burning machine, but I think the risk/reward proposition has finally reached an acceptable point for this name. That position is still in its embryonic stage.

On Tuesday, the Biden administration approved the sale of 116 M1A1 Abrams Main Battle Tanks and associated equipment and ammunition to Poland in a deal worth $3.75B. The Biden White House also approved of the sale of $1.5B worth of CH-47 Chinook helicopters to South Korea. The Abrams is a General Dynamics (GD) product while Boeing (BA) makes the Chinook.

Get an email alert each time I write an article for Real Money. Click the "+Follow" next to my byline to this article.
TAGS: Investing | Markets | Stocks | Technical Analysis | Trading | Treasury Bonds | Banking | Cybersecurity | Defense | China