As Jim Cramer laid out his game plan for this post-election week during Friday's Mad Money program, he got to Tuesday where investors will get a read on housing from D.R. Horton (DHI) and Rocket (RKT) . Cramer remained bullish on housing.


Let's check out the charts of DHI.
In this daily bar chart of DHI, below, we can see that prices are poised to retest the lows of September and October. Rallies overt $75 have not been long sustained. The slope of the 50-day moving average line has turned negative and prices are trading below it. The slower-to-react 200-day moving average line is still positive and intersects just below $60.
The On-Balance-Volume (OBV) line peaked in late August and its decline tells us that sellers of DHI have been more aggressive.
The trend-following Moving Average Convergence Divergence (MACD) oscillator also turned lower in late August and is now below the zero line for a sell signal.

In this weekly Japanese candlestick chart of DHI, below, we can see some negative candle patterns the past several weeks. Prices are still above the 40-week moving average line but the slope of the line is beginning to crest.
The On-Balance-Volume (OBV) line has been level or flat the past three months telling us that buyers and sellers of DHI are in balance for the moment.
The MACD oscillator has crossed to the downside for a take profits sell signal.

In this daily Point and Figure chart of DHI, below, we can see a potential upside price target in the $92 area but a decline to $66.08 will weaken the chart. 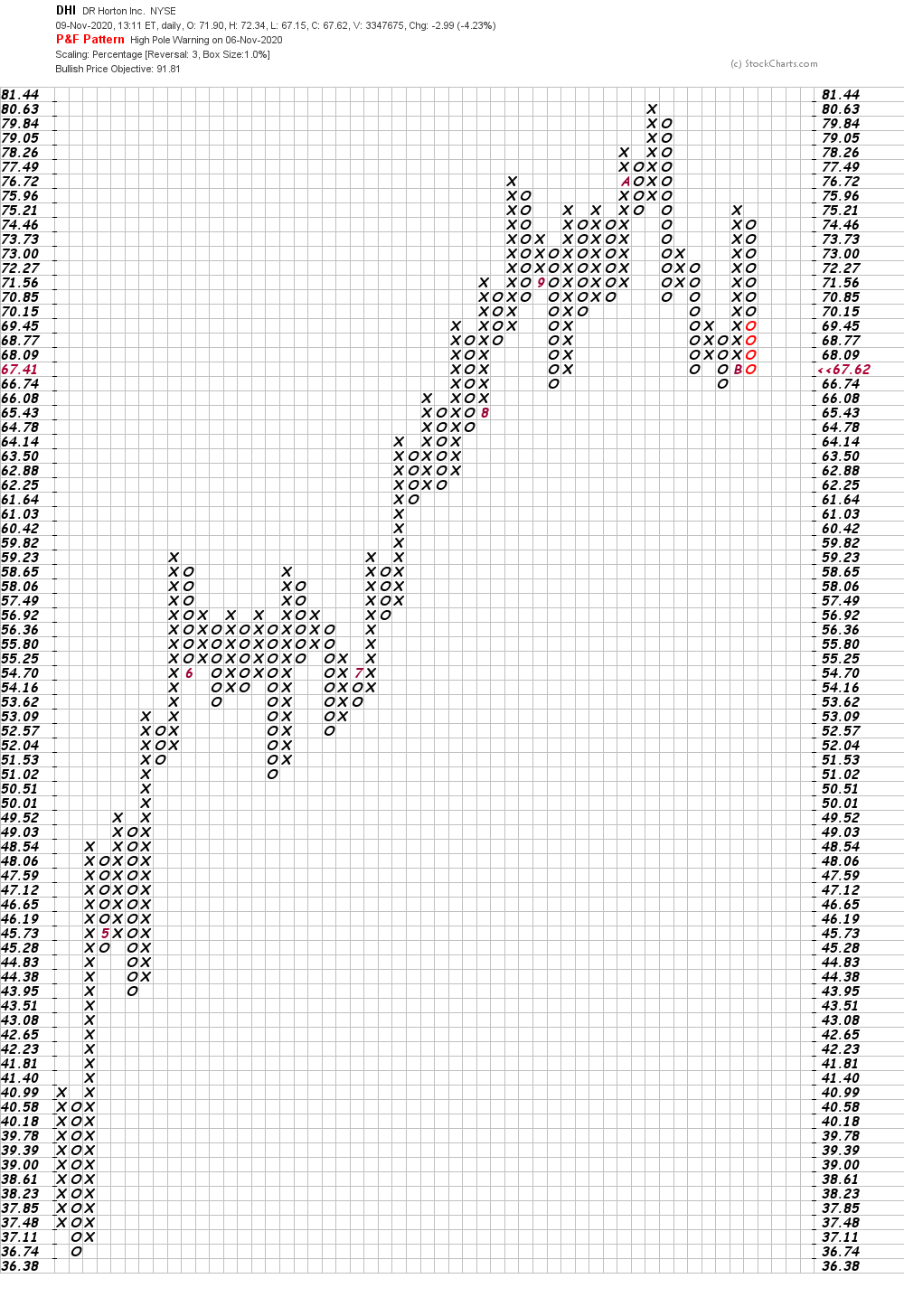 In this weekly Point and Figure chart of DHI, below, we can see a potential downside price target in the $53 area.

Bottom line strategy: The housing industry is supposed to be going strong with mortgage rates at low levels and other tailwinds, but the charts of DHI are pointed lower right now. I have no special knowledge of DHI's earnings but I would avoid the long side of the stock until new support develops.
Get an email alert each time I write an article for Real Money. Click the "+Follow" next to my byline to this article.
TAGS: Investing | Stocks | Technical Analysis | Trading | Housing Market | Construction & Engineering | Mad Money | Earnings Preview