CVS Health (CVS) reported the firm's fiscal third quarter performance on Friday (this) morning. The firm posted adjusted EPS of $1.66, easily beating Wall Street's expectations. As for revenue generation, CVS put a $67.1 billion print to the tape. That's good enough for 3.5% year over year growth, and good enough to beat the street by more than half a billion dollars. The firm also increased it's outlook for full year profitability going into the final three months. Let's dig in.

Pharmacy Services, the largest business unit of the firm's three, contributed $35.7 billion in revenue, down 0.85% year over year, but above consensus of $35.1 billion, as price compression and some client losses did take a toll. Retail Sales increased 5.9% to $22.7 billion, easily beating the $22.3 billion that the industry was looking for. Lastly, Healthcare Benefits posted sales of $18.7 billion, growth of 8.8%, and also above consensus as operations that had formerly been part of Aetna were combined with what was already in place.

On the quarter, CEO Larry Merlo stated, "Our strong third quarter results demonstrate continued execution of our long-term strategic plan that is transforming the way healthcare is delivered." He's not kidding. The firm offers everything from health insurance to front of the store, over the counter retailing, to flu shots to broad Covid-19 testing. The caveat? Larry Merlo will not be around long-term himself. Merlo will retire in February, stepping aside for current Aetna President Karen Lynch to take over the management of the entire business. Merlo, who held the post of chief executive since 2011, will remain on the Board at least until the annual meeting in May.

This is despite the firm having added 76K full and part-time employees since March, bringing headcount up to about 300K. CVS Health as recently as October indicated that the firm would need to add another 15K to payroll in the pharmacy as the firm prepares for a tough Covid and Flu season.

On that note, CVS now runs more than 4K Covid testing sites that have administered more than 6 million tests. Of these sites, the firm plans to have roughly 1K ready for rapid testing by year's end. 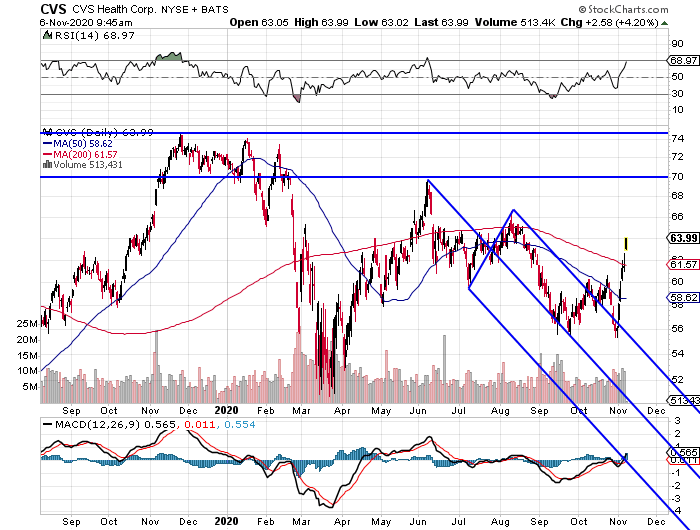 Perhaps the most interesting item visible on this chart is the downward sloping Pitchfork that begins in early June. CVS broke out of that formation in October, and in early November strength ahead of earnings, has now retaken both the stock's 50 day and 200 day SMAs. Notice the increase in November trading volume over October's as well.

Clearly, in my opinion, there has been recent professional accumulation. Maybe it was in anticipation of earnings. Maybe the spread of the pandemic. Perhaps this is either a vote against Merlo's leadership or to the contrary a vote in favor of Lynch.

I am long the shares, and I have added on weakness. Why? Because the shares - again, my opinion - are still cheap at just eight times earnings. Oh, and they do pay investors, even at these prices, 3.26% just to hang around. My target price is $73. Retaking last year's multi year high of roughly $77 is certainly not out of the question.

Get an email alert each time I write an article for Real Money. Click the "+Follow" next to my byline to this article.
TAGS: Dividends | Earnings | Investing | Stocks | Technical Analysis | Trading | Health Care Equipment & Services | Healthcare