Even New York Mets fans appreciate the prolific home run call of the crosstown rival Yankees radio play by play announcer John Sterling. "It is high, it is far... it is ... GONE !! Baseball season may be over. Earnings season, not yet. CVS Health (CVS) hit one out of the park on Wednesday morning. For the third quarter, the firm posted adjusted EPS of $1.84 (6.3% growth) on revenue of $64.8 billion (+36.4% y/y). These headline numbers for both the top and bottom line easily beat expectations.

It gets better. Adjusted operating income screamed 48.9% higher to $3.9 billion. Breaking down the results by business segment paints a picture of overall corporate execution that goes well beyond what even those of us who have been invested in this name expected.

Pharmacy Services, the largest of CVS's business segments posted revenue of $36.018 billion, 6.5% growth from Q3 2018. The Retail side of the firm put a $21.466 billion print to the tape. This was good enough for 2.9% growth. There was however some contraction in operating income produced by this unit. The firm blames this at least partially on both a $205 million pre-tax loss on the sale of Onofre as well as the recording of a $96 million store rationalization charge. As for the Health Care Benefits segment, this is where the firm's late 2018 $69 billion acquisition of Aetna comes in. This group produced revenue of $17.181 billion that in turn provided adjusted operating income of $1.423 billion that almost entirely was not there last year at this time.

There are several items that I think stand out from the tables provide by the firm in the press release. For one, year to date net cash flow from operations is just huge, at $10.214 billion, up from $6.386 billion for the comparable nine months a year ago. The cash position has grown to just under $5.2 billion from just over $4 billion over the last nine months. Growth in total assets has grown 12.2% over that same period, while the firm's reliance upon "Goodwill" to balance accounts only increased 1.1%. Turning over to liabilities, while expenses are rising, it quickly becomes clear that the firm is making progress in reducing long-term debt, which for me had been on my mind.

For the full year, as there is a quarter left on the clock, the firm increases it's own expectations for EPS to $6.97 to $7.05 versus consensus of $6.99. The new outlook increases the firm's guidance by eight cents on the low end and a nickel at the upper bound. The firm also confirmed guidance on cash flow from operations at a range of $10.1 billion to $10.6 billion. It seems that the nine month total would make that range clearly achievable should disaster be averted.

My reasons for being in this name in the first place had been an expected improvement in profitability as the Aetna acquisition is integrated into the firm, as well as the annual $2 dividend (yielding just under 3% at these levels.) My concerns have been balance sheet management, and political risk. The firm is obviously working on the balance sheet.

That said, there remains a certain amount of swirling risk emanating from both sides of the aisle in Washington. From the right, there has been an on again, off again effort to target pharmacy benefit management firms, while from the left, "Medicare for all" would be an outright disaster for firms like this, not to mention the entire economy. 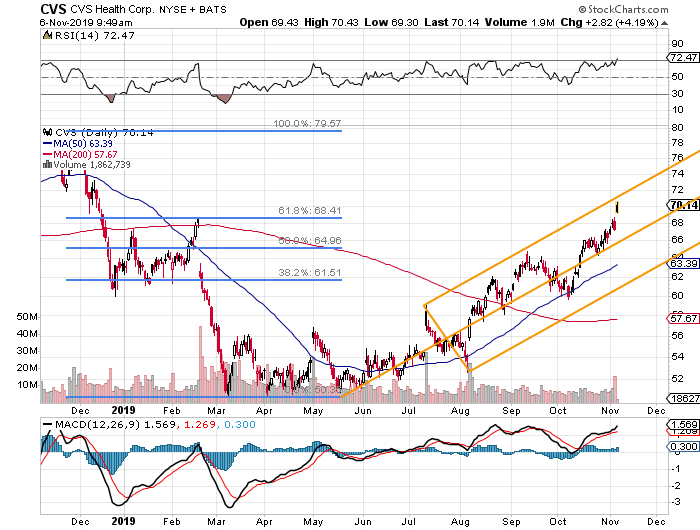 In the aftermath of these earnings, the shares appear to be not only testing the upper trend line of our Pitchfork model, but breaking above a 61.8% retracement of the December through March selloff. Relative Strength appears to be at possibly overbought levels.

I have a very large winner on my hands here. At $70, I am looking at a gain of just less than 30% for this name. My target price for this name had been $70 coming in, so I have to, by my own code of discipline, take some action. I will be a seller today, not a buyer.

I like the name, and I like the progress that CVS is making. This stock can go higher. I am still deciding whether or not I take my football and go home, or I leave something in place. Sometimes, one has to ring the register. For me, this is that day.

Get an email alert each time I write an article for Real Money. Click the "+Follow" next to my byline to this article.
TAGS: Earnings | Investing | Stocks | Technical Analysis | Trading | Consumer | Healthcare | Pharmaceuticals