Basically, the most important words spoken in my home: "I'm going on a CVS run... anybody need anything?" You see, we don't go inside stores. We did for a little while last summer, but then the slope of the curve got much worse again going into the latter half of Autumn. My sons have friends who go out. They don't know better. They haven't seen this monster for what it is, what it can do to an individual... for weeks, months, even a year. Hopefully, they remain blissfully ignorant.

The virus and the post-viral syndrome, which lasts seemingly forever. A year next month -- has left me stuck on a number of prescriptions. I was the guy who wouldn't take Tylenol for a headache. Now, I take four meds prescriptively as well as five over the counter dailies. I am, however... one of the very lucky ones. No complaining. My doctors have other patients that are also 11 months into this. I can still work, and I can still exercise, though I am not yet back to pre-Covid levels. I am most of the way back. I hear horror stories about the others.

You can get groceries delivered. You can do "drive-thrus" for fast food. Sometimes you do need to go to the pharmacy and talk to a pharmacist. Oh, they do have a drive thru lane, but since it turned into a Covid-testing site, the line has never been short enough to consider using for simply picking up medicine. So we go in. We grab our paper towels if they have them, our candy -- dark chocolate actually helps with post-Covid digestive issues -- over the counter meds, so do peppermint oil pills, etcetera. CVS is the one place that we'll go inside. CVS Health (CVS) also reported the firm's quarterly numbers this (Tuesday) morning.

For the firm's fourth quarter, CVS Health posted adjusted EPS of $1.30, which beat the street by six cents, but fell significantly from the $1.73 reported for Q4 2019. The firm also posted GAAP EPS of $0.75. Revenue generation landed at $69.55 billion for the three months... up 4% from a year ago, and also a beat of expectations. In addition, same store sales increased by 5.3% year over year, equal to the pace of growth from one year ago.

The firm's largest business is still Pharmacy Services, which contributed $36.355 billion to the whole, though that total amounted to a contraction of 1.9%. The other two segments grew nicely. Retail/LTC grew 6.6% to $24.062 billion, and Healthcare Benefits (Hello Aetna) increased 11.4% to $19.103 billion. Hey Sarge? Yeah, what's up? Uhm... that adds up to like $79 billion and change, you said revenue generation came to $69 billion and change. Good catch, you win today's prize. This is why you have to be able to monkey yourself around balance sheets, statements of operations and all of the other fun things that public corporations put in their data. Think this is complex? You should have seen General Electric (GE) under Jeff Immelt. There was no way to put those pieces together. Anyway, CVS reports $10,100 in "Intersegment Eliminations" which basically means that if you picked up a toothbrush in the front of the store and paid for it in the back of the store when you picked up you meds, that still only counts as one toothbrush. Kind of.

On that note, I think it is key to point out that the 5.3% same store sales growth above can be broken out as 7.5% growth for the pharmacy division and -1.8% up in the front of the store. That means that the growth came from people like me, who grab what they need and pay for it when they pick up their scripts. Nobody is browsing the aisles for convenience.

Oh, and before I move on, the adjustments taken still stem from integration costs related to the Aetna acquisition as well as the closures of a number of underperforming stores, as well as on the positive side, a $313 million payment related to the ACA risk corridor program and the sale of the Worker's Compensation business. The Goodwill section on the balance sheet remains close to unchanged.

While CVS continues to provide an invaluable service to the community as a Covid testing center, the firm along with key competitor Walgreens Boots Alliance (WBA)  , have been getting the vaccines out to both residents and staff at long term and assisted living facilities. CVS locations in 11 states have now started to take reservations to distribute the vaccines to those eligible in various neighborhoods. This service will by the way, will grow as does both the availability of said vaccines and also does the eligible population. The firm now sees adjusted EPS of $7.39 to $7.55 (The average of 27 sell-side analysts had been for $7.54 with a low of $7.31 and a high of $7.69.) and cash flow from operations ending in a $12 billion to $12.5 billion range. 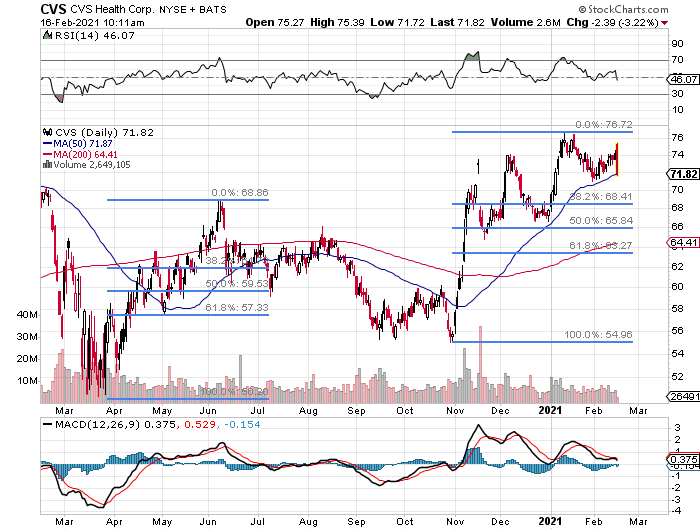 I'll be honest with you. This is not a great chart. That said, I do want to give new CEO Karen Lynch a chance. Nothing against Larry Merlo but I always thought that this stock was undervalued. It still trades at less than 10 times forward PE, and pays a nice dividend (2.7% yield) and had so much potential but could not break through. Really, even with today's selloff, my position, just equity (not including any of my net basis manipulating option trades) is still up 20% and that was really good back before instant gratification became the norm.

I am going to change things up though. My new pivot becomes the 2021 high of $76. We'll put a cautious price target of $91, but that's subject to this stock actually defending the 50 day SMA at $71.87 which is being tested right now. That line is not retaken later today or early next week. Then we start leaning on our old friend Fibonacci for support levels at $68 and $65. Let's make $65 the panic point, which still places panic well above net basis if you have been with me on this one since the start. Rock and Roll.

Get an email alert each time I write an article for Real Money. Click the "+Follow" next to my byline to this article.
TAGS: Earnings | Investing | Stocks | Technical Analysis | Trading | Healthcare | Pharmaceuticals