CVS Health Corp. (CVS) released its quarterly sales and earnings numbers this morning, and traders and investors were quick to react with selling before the NYSE opening bell.

We do not know where prices will close today but we can make some educated guesses to see what that will do to the charts and indicators.

In this daily bar chart of CVS, below, we can see a wide sideways trading range for CVS shares the past 12 months. If you bought the lows back in March of May you might only have a $4 profit at this moment. This under-performance when many stocks have doubled in the past year has to test the resolve of even long-term investors.

The daily On-Balance-Volume (OBV) line shows a rise from April to early December but most of that advance was erased from December to the middle of February as sellers became more aggressive.

The Moving Average Convergence Divergence (MACD) oscillator gave a cover shorts buy signal in early January but it looks like it will now turn down again from just below the zero line.

In this weekly bar chart of CVS, below, we can see a two year downtrend for prices followed by a $60-$80 sideways pattern. Prices are below the mostly flat 40-week moving average line.

The weekly OBV line shows a decline from September or before prices peaked in November.

The weekly MACD oscillator is below the zero line and was narrowing towards a possible crossover. The price weakness this morning is likely to delay a bullish signal.

In this Point and Figure chart of CVS, below, we have the price action through Tuesday's close. Later today a column of "O's" should be seen. A trade at $63.50 should weaken this chart. 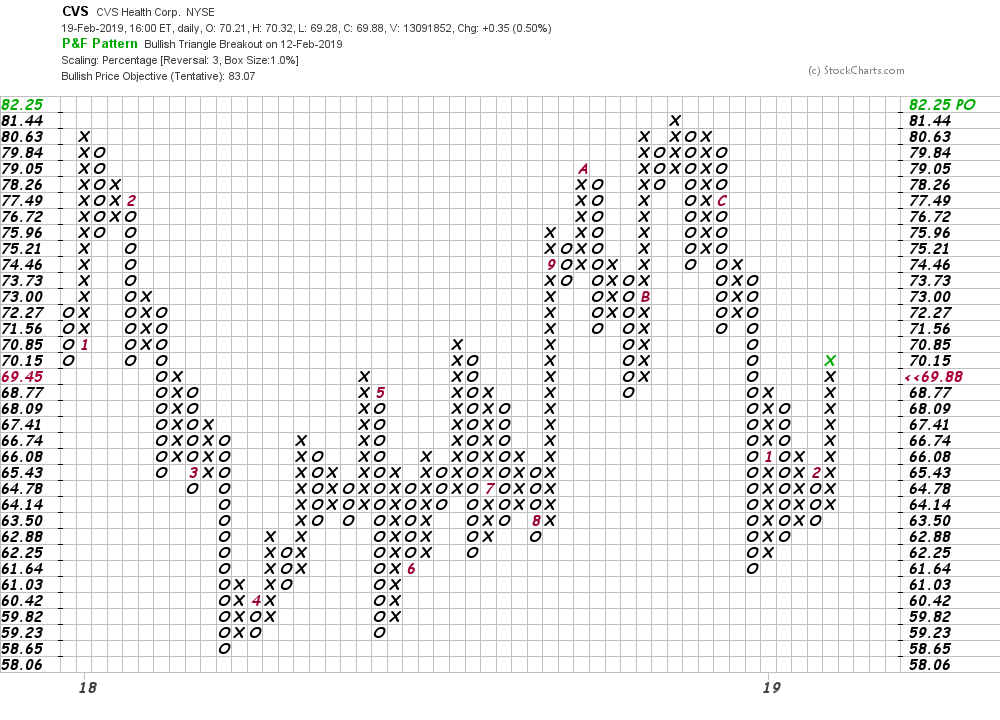 Bottom line strategy: CVS is probably going to retest the $64-$62 area or the lows of December and January. A close below $62 will be bearish. A period of repair will be needed before CVS looks attractive on the charts.

Get an email alert each time I write an article for Real Money. Click the "+Follow" next to my byline to this article.
TAGS: Earnings | Investing | Stocks | Technical Analysis | Trading | Healthcare | Pharmaceuticals | Stock of the Day