Like a pea... rolling off of a table. Like a penny... dropped from the observation deck of the Empire State Building.

It happened about 40 minutes after Wednesday afternoon's closing bell. Kablam.

The first shot came last week. The European Medicines Agency had delayed a decision on granting regulatory approval to German biotech CureVac's (CVAC) messenger RNA based COVID-19 vaccine candidate until August. Remember, the European Union had signed a deal last year securing up to 405 million doses of this jab last year, and sure could use the ammo in their fight against the virus.

That first shot was just a warning.

High hopes were dashed late Wednesday as the firm posted results from a 40,000 subject Phase 2b/3 clinical study that showed efficacy of just 47% against symptomatic COVID-19. The news came on the heels of 90% efficacy shown by the protein based candidate developed by Novavax (NVAX) and the two earlier messenger-RNA vaccines developed by Moderna (MRNA) and Pfizer (PFE) /BioNTech (BNTX) that were both seen at roughly 95% effective. That said, they were not exactly the same. This vaccine was said to maybe require less refrigeration than the other messenger RNA vaccines.

CureVac traded as high as $125.66 on June 7th, and closed at $94.79 at the Nasdaq on Wednesday. I saw the stock trade with a $37 handle overnight before recovering somewhat this morning. Just prior to the opening bell, these shares were trading around $51.

The deal is this. The firm loses money every quarter. Sales typically run in the single digits in millions. Fortunately, CureVac is sitting on a mountain of cash... $1.6 billion as of year's end 2020 thanks to governmental funding for shops working on developing vaccines in this fight against the pandemic. That said, the liability side of the balance sheet is dominated by $237 million in current unearned revenue and $610 million in non-current unearned revenue.

CureVac is blaming the current variant rich environment for the low efficacy rate, as almost all cases from the study came from what are now considered to be "variants of concern." We believe the earlier vaccines to still be quite effective against currently existing variants, though I imagine that this news will cause some doubt.

In the end, CureVac is down but not out. Because of the nature of the technology, messenger RNA can, I believe... be adapted more quickly than can more traditional or adenovirus based vaccines. So, there is that, plus CureVac is also working on a "next generation" COVID-19 vaccine candidate with GlaxoSmithKline (GSK) . 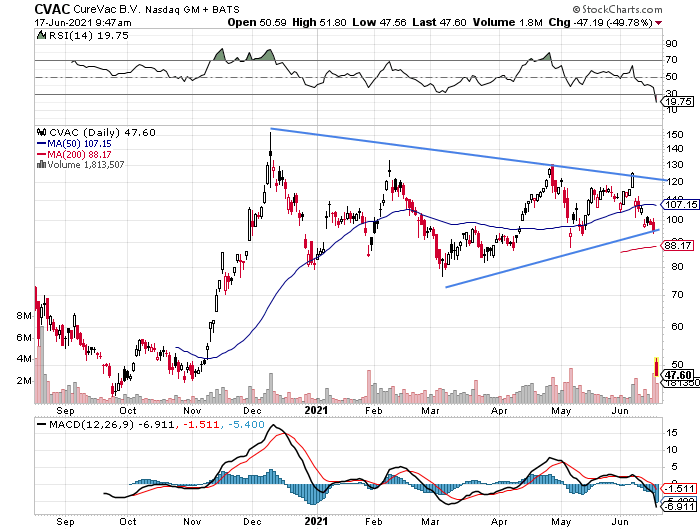 The stock had nearly closed a symmetrical triangle pattern that usually produces an explosive move one way or the other once completed, with or without news. As readers will see, the shares have dropped a few more bucks in price as I have been writing. Unfortunately, without sales the shares are really overvalued at any price.

My advice would be that if one takes a shot on this dip and buys the stock, know that what you are doing is indeed "taking a shot" as there is not yet much of a business in place. The equity is purely speculative. Traders should also be aware that the July 16th $40 puts were trading at extraordinary volume, and those puts were trading at a nearly $4 premium. What that means is be careful, or if you must buy the dip, day-trade it. For investors, the dip in Novavax makes more sense to me. I am, however... long neither issue.

Get an email alert each time I write an article for Real Money. Click the "+Follow" next to my byline to this article.
TAGS: Investing | Markets | Stocks | Technical Analysis | Trading | Biotechnology | Coronavirus