During Wednesday's Mad Money program Jim Cramer talked about the ongoing trade war and the hope for a soon-to-be deal between the U.S. and China. He noted that this is leaving a strange take on stocks. Cramer looked at Cummins Inc. (CMI) which last week missed on earnings, beat on revenue and provided a cautious outlook. The stock sank until the conference call. That's when its CEO said they expect stagnate action out of Europe and India, a decline in China, but growth in Brazil and North America.

That helped ease the selling pressure, but still left people divided on the stock with one analyst upgrading the stock to buy while another cut the stock from a buy to hold and removed their price target. Cramer pointed out that trucking orders were under severe stress following the Fed's plan to continue raising rates. However, since the Fed has walked back from that stance, heavy truck orders are likely to rebound. All of this is a bit confusing to me so let's focus on the charts and indicators.

In this daily bar chart of CMI, below, we can see a neutral to positive outlook for the stock. Prices have been in a sideways trading range since May. CMIT has crossed above and below the 50-day moving average a number of times. Rallies to the declining 200-day moving average line failed in October and November but this year CMI has been able to stay above this longer-term indicator. Volume shows a spike in late October at the low and less volume in December at the retest of that low. The daily On-Balance-Volume (OBV) line also shows a sideways movement but going back to last February. The OBV line shows some improvement from late December but it needs to move above the November high to impress the bulls. The Moving Average Convergence Divergence (MACD) in the lower panel shows a cover shorts buy signal and in January an outright go long signal as it crossed the zero line.

In this weekly bar chart of CMI, below, we can see three trends - an uptrend from 2016 to early 2018; a downtrend to June followed by a sideways/basing trend. Prices are above the now flat 40-week moving average line. The weekly OBV line is neutral but also not far from making a new high for the move up. The weekly MACD oscillator is just below the zero line and thus not far from an outright go long signal.

In this Point and Figure chart of CMI, below, we can see that an important breakout will happen if prices trade at $157.05 and that there is an upside price target of $198.69. 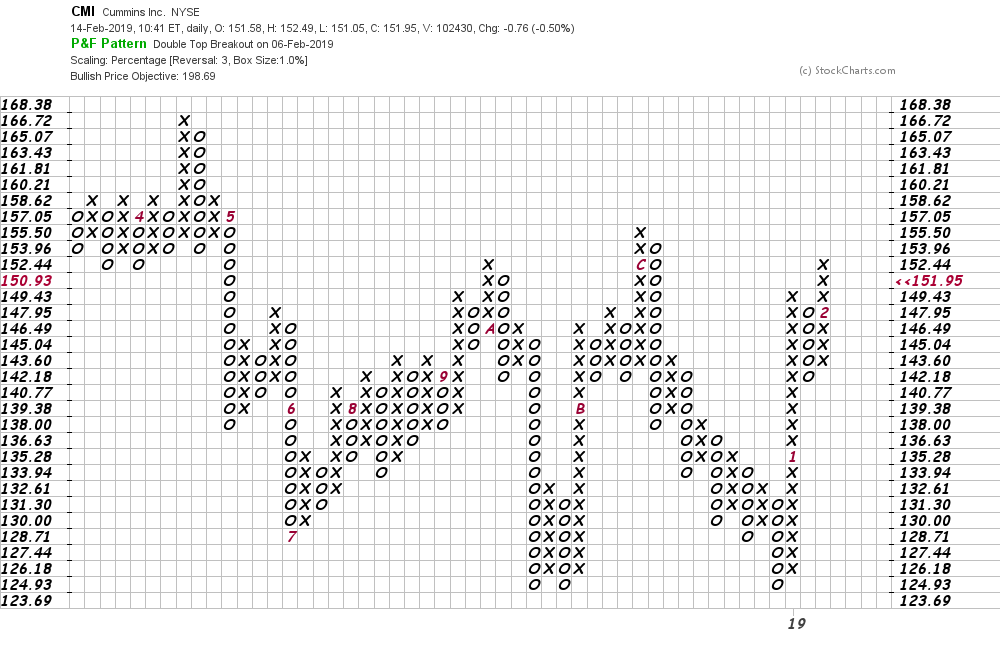 Bottom line strategy: CMI looks poised to break above the October and December highs but it may be held back by news or rumors on the trade front. Traders should wait for strength above $157 before buying and even then they will need to risk below $145.

Get an email alert each time I write an article for Real Money. Click the "+Follow" next to my byline to this article.
TAGS: Investing | Technical Analysis | Transportation | Industrial Goods