Cryptocurrencies have been on a wild ride as they topped in recent months and fell 40%-50% or more. The word 'crash' is fitting for the action that occurred. There has been some recent stabilization, and it looks like a recovery is starting.

There are two main cryptocurrencies that are traded like stocks in quasi-closed-end funds. Grayscale Bitcoin Trust (GBTC) holds Bitcoin, and Grayscale Ethereum Trust (ETHE) holds Ethereum. There are thousands of other cryptocurrencies traded on exchanges like Coinbase Global (COIN) , but if you want exposure to the two largest cryptos in the form of stock, then the choice is either GBTC and ETHE.

Ethereum has been gaining traction recently against Bitcoin primarily because it is a flexible platform, while Bitcoin is a cryptocurrency that functions as a store of value and a medium of exchange. Ethereum may be executable code, but that contains a variety of conditions. It is the technology that is used for Nonfungible Tokens because of this feature. 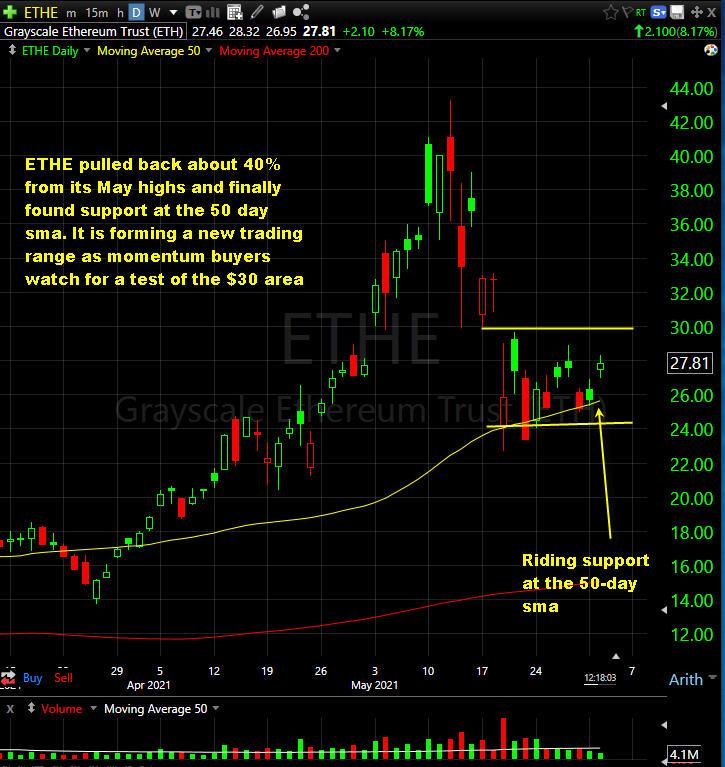 Ethereum's uses are growing quickly, and there is a clear case for its utility. In addition, Ethereum is moving to a new model for creating more Ethereum, which is much more environmentally friendly. This new system is called "proof-of-stake" rather than "proof-of-work" and addresses some of the issues that Elon Musk (Tesla (TSLA) ) recently tweeted about, which helped to create the crash.

Finally, ETHE has been acting better technically than GBTC. It held up for a while as Bitcoin crashed and seems to have found better support. It is likely that more money will be shifting into ETHE as those investors looking for some exposure to the new asset class try to diversify. I am holding an ETHE position and looking to build it.

Get an email alert each time I write an article for Real Money. Click the "+Follow" next to my byline to this article.
TAGS: Investing | Markets | Stocks | Technical Analysis | Trading | Cryptocurrency

Now That We Have the Bitcoin ETF, Do You Know What Contango Is?

Outside of the ETF launch which could generate flow into the crypto space, it is important to ask what the real theme is for Bitcoin.

While cryptocurrencies are indeed an asset class, and they are divisible, they do not serve as a medium of exchange, and remain unproven as a store of value.