I must admit that among those names reporting on Tuesday afternoon, I find CrowdStrike (CRWD) to be perhaps the most intriguing. I have long been in Zscaler (ZS) . I think that name might be one of my oldest continuously held long positions, and it certainly has done well for me, and anyone else who tagged along for that ride. I even added to Zscaler last week as growth stocks suffered a rotation that is already several days into the unwind. That's how sure I think I am in cybersecurity. Yet, I have only been in one such name. Unfortunately, they are all expensive in terms of traditional valuation metrics.

Investors have to look past these metrics in order to gain equity exposure to the space. I understand. I have never been quite comfortable with investing that way either, but had I not learned to... I would not have done nearly as well over the past 20 years or so, as I had. In fact, it is fair to say that if investors like myself had priced all industries the same way, we would very likely not be professional traders at this point in our lives.

Sitting down? CrowdStrike currently trades at 769 times forward looking earnings. This is no typo. The stock trades at 58 times sales, and that number has gone higher nearly every single quarter.

I don't think we really have to explain. Demand for personal and corporate protection will not be going lower anytime soon. Probably never in my lifetime. There is money, a lot of money made by the bad actors, either criminal or national, and efforts must be made not to just try to keep up, but to make every attempt to anticipate that next vulnerability to be exploited. The recent SolarWinds (SWI) and Microsoft (MSFT) e-mail server program hacks are just the latest and most high-profile examples of nefarious use of technology. Somebody probably tries to "get in" to your computer every day.

The national/shift for white collar work from the office to home has only accelerated the bad behavior as well as the need to combat those behind it. There will be, as some offices reopen along with the economy, a shift back to the office, but that shift will not be complete. The firms that call employees back to centralized locations will spend to upgrade on site networks as well as move greater portions of these networks to the cloud. Other firms will realize that even if remote production does drop off a bit, that drop off does not come close to costing the firm as much as a large real estate footprint in a major city. There will be firms that choose to remain decentralized. In either case, demand for cybersecurity only increases.

If you can get past those multiples, CrowdStrike is already half a step ahead of many other cybersecurity operations. The firm's platform is cloud-based. Many others are either on-premise or trying to quickly migrate from being on site to being in the cloud or into some kind of hybrid. My thoughts are defense has to be broad, and has to protect not just from the cloud, but the cloud itself. Just an FYI, Zscaler also leads in this arena through the Zscaler Cloud Platform using a zero-trust approach, and that was what originally attracted me to that name above the competition going way back. CrowdStrike is quickly becoming my second favorite name in the space, and forcing me to consider broadening my exposure to cloud-based cybersecurity.

There are 20 analysts that I can find that follow this name. For the firm's fourth quarter, CrowdStrike is expected to report EPS of $0.08. All 20 analysts are between $0.07 and $0.10 on this number, so either the cat is out of the bag or everyone is copying the same homework. Revenue generation is projected at about $250.5 million, which would be good for year over year growth of almost 65%. Again, the whole street is between $246 million and $260 million here, so not much variation in thought. Possibly key to note that 65% growth would be a deceleration from consistent growth in the mid to high 80%'s even if $250 million would be a record quarter for the firm. I might be wrong. I might be very wrong. But in 2021 there have been four upside revisions made to the top line number and none to the downside. I am smelling a revenue beat. Again... no promises. Don't know anything. Just instinct. I expect that the firm will provide guidance and at these valuations, guidance matters more than results anyway to be honest. 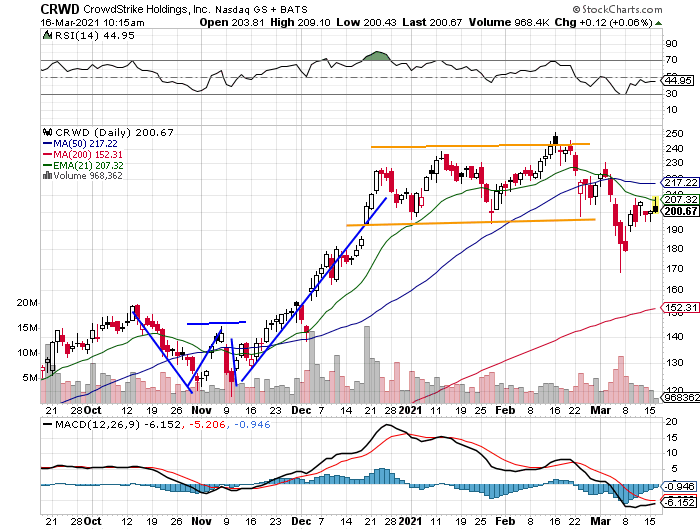 Readers will see a compressed double bottom last October/November that led to the breakout that lasted into late December. A basing period of consolidation forms at that point that lasts into early March when the shares break support. As the rotation of the past few weeks continues to un-rotate, these shares have tried to regain that line of support only to be repelled at the 21 day EMA earlier this morning. That line is key for today. Forward looking guidance will matter more by tonight.

The shares are nowhere close to being either overbought or oversold, which is a good thing going into a news event. The daily MACD is perfectly situated to enhance a rally should there be one following tonight's digits.

Note: This sale pays for most of the outlay from the spread above. Only traders willing to take on equity risk at $185 seeing that price as a discount, should even consider this additional part of the overall strategy. Without making this sale, the risk is limited to that $3. Potentially having to add equity at $185 raises the stakes exponentially.

Get an email alert each time I write an article for Real Money. Click the "+Follow" next to my byline to this article.
TAGS: Earnings | Investing | Markets | Stocks | Technical Analysis | Trading | Cybersecurity