CrowdStrike Holdings (CRWD) reported the firm's first quarter financial results on Thursday evening. All in all, CrowdStrike reported one heck of a quarter. Poking holes in this report is really going to be nitpicking. The one strike against CrowdStrike, even if performance is solid, is that just like many of it's cybersecurity peers and competitors, the stock appears to be expensive, and this is, or at least has been a tough environment for highly or potentially overvalued equity.

For the three month period ending April 30th, CrowdStrike posted adjusted EPS of $0.31 (GAAP EPS: $-0.14) on revenue of $487.83M. Adjustments made? Because we do deserve to know... $0.43 per share for stock based compensation and two cents per share for amortization of acquired intangible assets.

Both of these lines (adjusted) beat Wall Street, and the top line was good enough for year over year growth of 61.1%. Annual Recurring Revenue of ARR increased 61% to $1.92B, with $190.5M in net new ARR added during the reporting period. Adjusted subscription gross margin printed at 79%, in line with the year ago comp. Cash flow from operations grew 46% to $215M, while free cash flow increased to $158M (+34%), both being new firm records. Adjusted income from operations landed at $83M, up from $29.8M one year ago. The firm added 1,620 net new subscription customers over the three months reported making 17,945 total subs.

CrowdStrike ended the quarter with a net cash position of $2.153B, and total current assets of $2.733B. This measures up very well against current liabilities of $1.497B for a current ratio of 1.83. Very healthy. Total assets of $3.836B, include $510M in "goodwill" and other intangibles. Total liabilities less equity add up to $2.719B including $740M in long-term debt. This firm easily passes my test and has a very nicely done balance sheet.

So far, I can find nine sell-side analysts who are both rated at five stars by TipRanks and have opined on CrowdStrike since this release was published and the conference call held. All nine have rated CRWD as a "buy" or their firm's buy equivalent. The average target price of the nine is $230.44, with a high of $275 (Jonathan Ruykhaver of Baird) and a low of $200 (Michael Walkley of Canaccord Genuity).

CrowdStrike has demonstrated that demand is healthy and we knew that. Not for software, as Salesforce (CRM) and Microsoft (MSFT) have demonstrated while warning on FX headwinds, and certainly not for cybersecurity. I am currently out of the space, having taken recent profits in best of breed name Palo Alto Networks  (PANW) . Traditionally, PANW and Zscaler (ZS) have been my two "go-to's" in cybersecurity. For those that don't know, CrowdStrke and Zscaler work well together and often cross-market their products to the same clients.

That said, while it is safe to say that the demand might be there for cybersecurity services perhaps eternally, these stocks are all overvalued relative to not just the broader equity marketplace but the tech sector as well. Kind of tough to say you're going to be disciplined and still invest in CrowdStrike at 143 times forward looking earnings or Zscaler at 249 times. Heck, Palo Alto becomes the discount brand at 69 times.

I will continue to trade the space, and these three names will be the three that I will focus on, but to buckle in and invest... I would have to be sure that the market has gone into another "valuations don't matter" era. I just do not see that likely very soon. 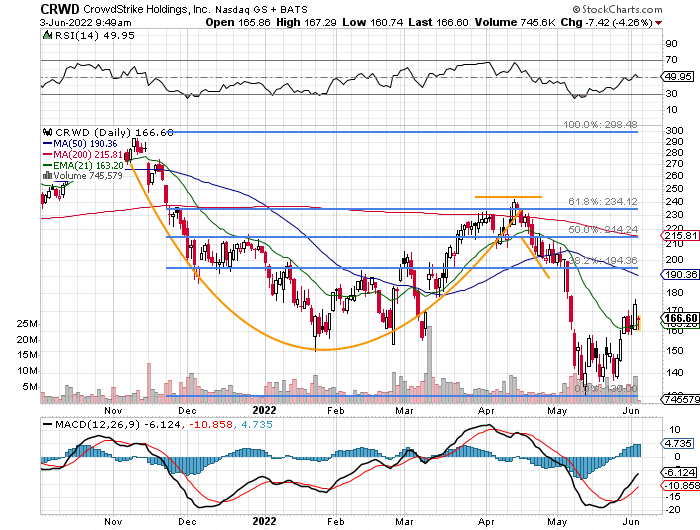 Traders will see the November through April "cup with handle" pattern with a $298 pivot that failed and devolved into a rout. The shares now, this morning's pressure aside, try to rebound with the market in general. For those trying to work this stock at this time, the shares have taken and have found support at the 21 day EMA ($163). That support remains unbroken.

The stock needs to hold that green line. If this line holds, there really is not a lot of traffic on this chart for a little ways. The 50 day SMA looms at $190, and at $194 you'll run into the 38.2% Fibonacci retracement level of the November through May beat-down. You do have an improving daily MACD coupled with a neutral RSI. I would prefer to wait for something that looks cheaper.