In our review of the charts of CrowdStrike Holdings (CRWD) on December 3, we wrote that "CRWD could bounce further in the short-run but the charts and indicators currently suggest that further weakness is possible. I am content to stay on the sidelines and see how things develop."

Let's review the charts again to see if this is a better location to probe the long side of this cybersecurity firm.

In this daily bar chart of CRWD, below, we can see that prices reversed direction in November and declined into early January. Prices are below the declining 50-day moving average line and below the flat 200-day line. Early this month the 50-day line fell below the 200-day line for a bearish dead or death cross.
The On-Balance-Volume (OBV) turned lower at the end of August but we can now see a double bottom in this indicator in early December and early January. This could be the start of a new rise in the OBV line.
The 12-day price momentum study shows a higher low from December to January even as prices made a lower low. This difference in movement is a bullish divergence and tells us that the pace of the price decline has slowed. This can foreshadow a rally.

In this weekly Japanese candlestick chart of CRWD, below, we can see two recent candles with lower shadows telling us that traders rejected the lows around $180. The $180 area held prices from further declines in early 2021. The slope of the 40-week moving average line is flat and prices are below this indicator.
The weekly OBV line shows a slight decline from August. The Moving Average Convergence Divergence (MACD) oscillator is below the zero line in sell territory and has not started to narrow.

In this daily Point and Figure chart of CRWD, below, we can see an upside price target in the $237 area. 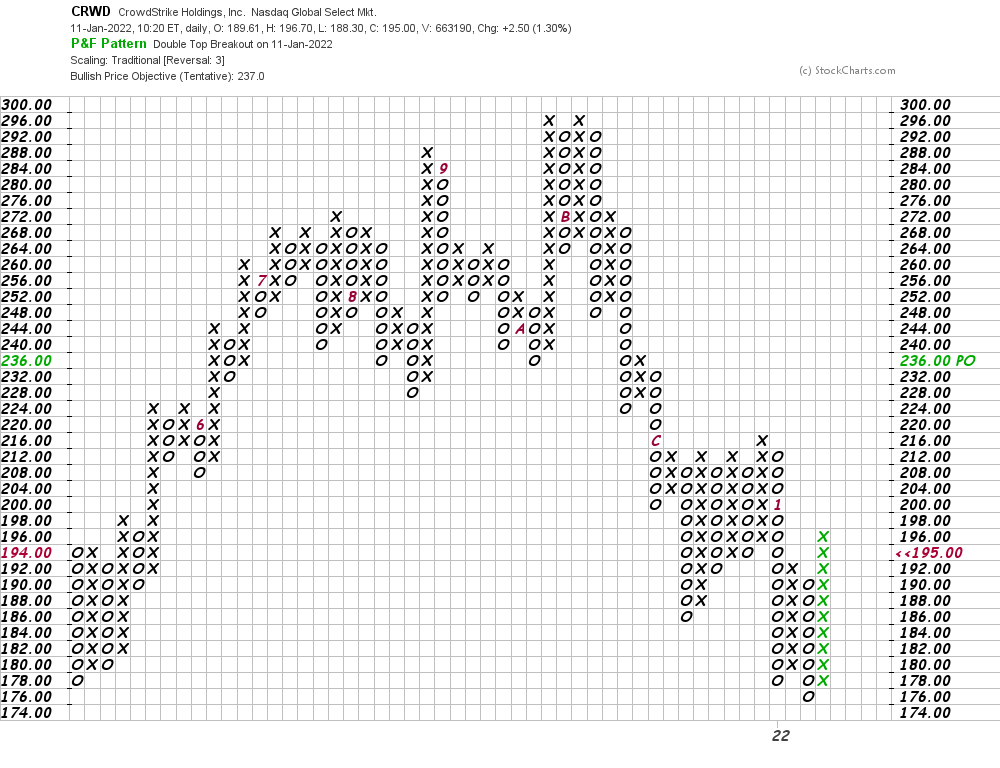 In this second Point and Figure chart of CRWD, below, we use weekly price data. Here the software projects a downside price target of $133.

Bottom line strategy: CRWD is still in a downtrend but we are seeing some positive clues. CRWD needs to make a higher low and a higher high to turn the trend positive. Until we see this kind of price movement unfold I would prefer to stand aside.
Get an email alert each time I write an article for Real Money. Click the "+Follow" next to my byline to this article.
TAGS: Investing | Stocks | Technical Analysis | Trading | Cybersecurity | Software & Services | Technology