In this daily bar chart of CRON, below, I don't want to focus on the rally into the February high but rather the decline from that high. Prices made two attempts to move above $24 and both failed. Volume was pretty heavy on the first rally attempt. The price level was double or triple from where they were just a couple of months earlier. Big gains in a short period of time can often result in significant profit taking.

After the March peak, CRON turned lower and broke below the rising 50-day average line which quickly turned bearish. Over the past two months CRON has been testing the rising 200-day moving average line.

The volume has been light and the On-Balance-Volume (OBV) line has been flat since March suggesting little increase by bulls or bears. In the lower panel is the Moving Average Convergence Divergence (MACD) oscillator is currently flat and hugging the zero line.

In this weekly bar chart of CRON, below, we can see that farsighted investors could have gone long this stock around $2 and ridden it up to $24 for a huge percentage gain. Prices bounced off the rising 40-week moving average line a number of times. Prices are again testing the 40-week line.

The weekly OBV line signals that sellers have been more aggressive since January. The MACD oscillator is still above the zero line but it has been in a take profits sell mode since March.

In this Point and Figure chart of CRON, below, we can see a downside price target of $14. A close at $14 would mean that prices closed below the 40-week moving average line. 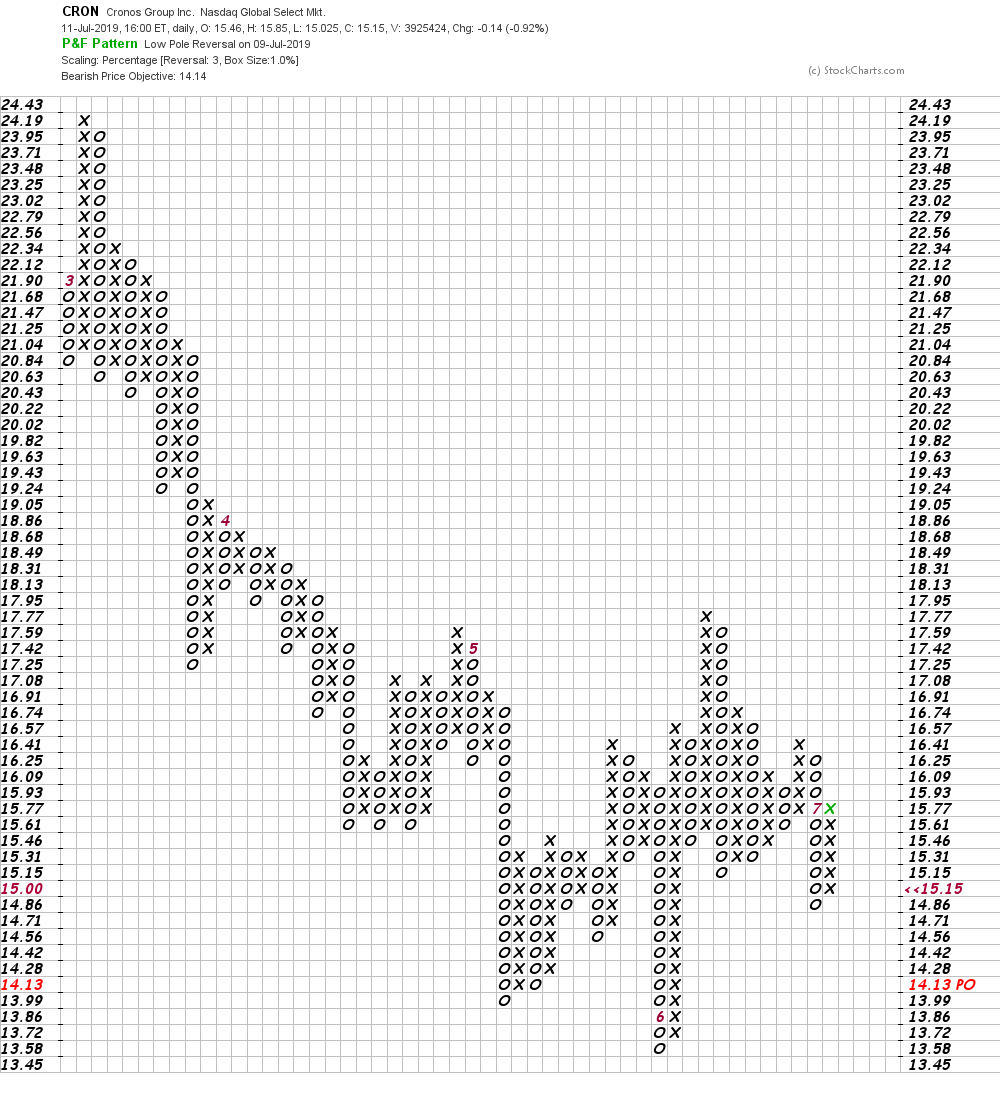 Bottom line strategy: CRON could close below the 200-day line and the 40-week line and this could precipitate further weakness. Protect long positions.

Get an email alert each time I write an article for Real Money. Click the "+Follow" next to my byline to this article.
TAGS: Investing | Stocks | Technical Analysis | Trading | Marijuana | Mad Money | Cannabis

Since 2010 Signature Bank grew rapidly across all major business metrics and renewed growth is expected in 2021. Here's how to play it.

Psst: Can You Hear that Bitcoin Chatter? Then I've Got a Chart for You

After a reader asked about the cryptocurrency, I took a look, and I like what I saw.